The National Committee stresses the promotion of mental health 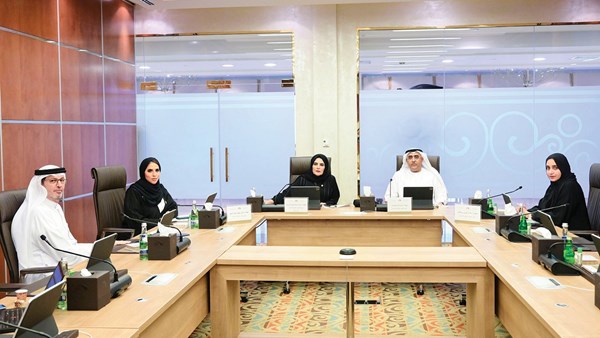 The Health and Environmental Affairs Committee of the Federal National Council, headed by Naama Abdullah Al-Sharhan, Second Vice-President of the Council and Chairperson of the Committee, organized yesterday evening a virtual panel discussion entitled “Promoting mental health in the UAE”, as part of its work plan to discuss the topic “Policy of the Ministry of Health and Prevention” Society regarding the promotion of mental health”, with the participation of specialists, media professionals and those interested in the field of mental health.
The committee members participated in the episode: Sumaya Abdullah Al-Suwaidi, the committee’s reporter, Ahmed Boushehab Al-Suwaidi, Shatha Saeed Alai Al-Naqbi, Virgin Hassan bin Rakad, Muhammad Ahmad Al-Yamahi, and Dr. Moza Muhammad Hamrour Al-Amri.
Members of the Federal National Council also participated in it: Ahmed Abdullah Al-Shehhi, Sabreen Hassan Al-Yamahi, Dirar Hamid Belhoul, Aisha Muhammad Al-Mulla, Muhammad Issa Al-Kashf, Maryam Majid bin Thaniah, and Naima Abdul Rahman Al-Mansoori.
Naama Al-Sharhan explained that the seminar witnessed a distinguished presence from the public, specialists and those interested in the field of mental health, and that the participants touched on a number of challenges and proposals regarding the promotion of mental health in the country, and they will be discussed with government representatives and a number of them will be formulated as recommendations that touch the reality, to be included in the The final report of the committee on the general topic and its discussion under the dome of the Federal National Council.
Sumaya Al-Suwaidi, the committee’s reporter, indicated that the discussion in the seminar revolved around several main axes, and touched upon the importance of changing the negative perception of the mentally ill and helping him to integrate into society positively, as well as protecting young people from all negatives that they may be exposed to from broadcasting ideas or contents that affect their lives. The psychological aspect of social media influencers.