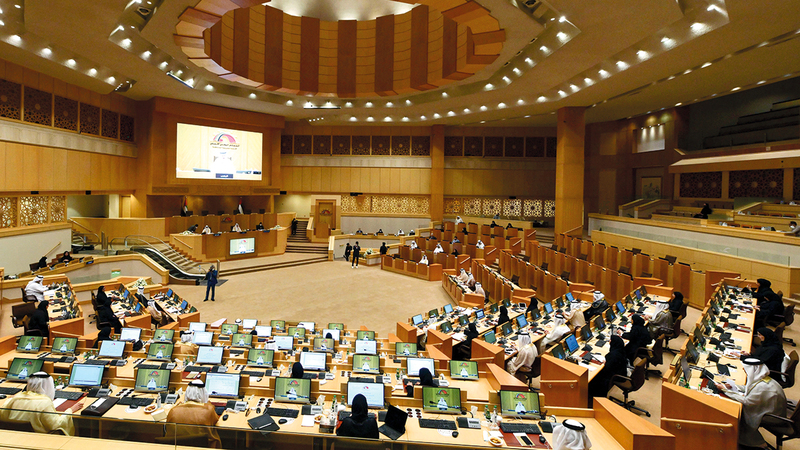 Yesterday, the Federal National Council approved, in its closing session of the second ordinary session of the 17th legislative term, a draft federal law to amend some provisions of Federal Law No. (7) of 2008 regarding the National Archives, allowing the establishment of a national library that represents an intellectual archive for preserving and archiving intellectual production of all kinds. in the state, from damage and loss, and making it available to the public and future generations.

The Speaker of the Council, Saqr Ghobash, confirmed that all the draft laws presented to the Council by the government in this role, which amounted to 15 legislations, were completed by the Council as a whole, in accordance with its constitutional powers.

He explained that the council discussed in depth and in detail five topics that dealt with what matters to the citizen in his daily life, pointing out that the council members asked 40 questions to ministers in various fields related to matters important to the country and the citizen, and they were answered at the time, indicating that the council received 80 complaints, and it has gone a long way. In light of what the legal systems allow.

On the level of parliamentary diplomacy, Ghobash said: “We were keen to participate in various parliamentary events and forums, Gulf, Arab, Islamic and international, which numbered 130 parliamentary participation, as our participation in each of them was in a manner befitting the name and position of the UAE at the global level, and we were also keen that Our role in these participations will be on the same approach and the principles laid down by the founding fathers, led by the father, Sheikh Zayed bin Sultan Al Nahyan, may God rest his soul, and consistent with the directions and aspirations of the state’s policy drawn by the leadership.

In addition, a member of the Council, Shatha Al-Naqbi, asked the Minister of Education, yesterday, a question about the age for joining the “kindergarten” stage, and the minister responded to him in writing by emphasizing that when determining the age requirements, several things are based on, the most important of which is the strategic direction of the state. And global standard comparisons, research, studies, and charters of international organizations, such as UNESCO and the OECD, explaining that after referring to a number of standard comparisons of a number of international countries on the subject of kindergarten entry age, it was found that most countries recommend and set the entry age for kindergarten at five years, at the beginning of the year. Enrollment at the beginning of the academic year, on August 31 and before September 1 of each year.

He stressed that calculating the age of acceptance of students, on August 31, has several advantages, including achieving a better educational level for students, and an easier transition for students between schools outside and inside the country, in addition to the fact that all British, Swiss and American schools apply their own systems because students do not enroll in kindergarten at the age of early.

She added, “If the ministry conducts a questionnaire for the views of students’ parents, on the decision to raise the student’s age to register in kindergarten and first grade, it will not achieve support, because it deprives the child of an academic year (delaying him by an academic year), which may obliterate skills unnoticed by the child in years. His first age, and falls into the gap between the nursery school, which does not accept him because of his age, and the kindergarten because of the conditions, as well as the delay in entering the preparatory stage (kindergarten), which causes psychological and social consequences, and an age difference between students, and deprives the state of young competencies in various fields. On the grounds that they did not finish their education, in addition to the fact that delaying the student’s enrollment in school by a year delays him from starting a working or married life.”

The member, Adnan Hamad Al Hammadi, directed a question to the Minister of State for Entrepreneurship and Small and Medium Enterprises, Chairman of the Board of Directors of the General Sports Authority, Dr. Ahmed bin Abdullah Belhoul Al Falasi, regarding the controls taken by the General Sports Authority to limit the abuses exploited by sports clubs, about the condition of continuous residence in The state for professional players stipulated in Article (8) Clause (3), of Cabinet Resolution No. (27) of 2018, regarding the participation of non-national players in official sports competitions.

In a written response, the minister stated that the authority formed a committee on June 19, 2019 to study the cabinet’s decision regarding the participation of non-national players in official competitions, after monitoring some cases that did not meet the conditions stipulated in the cabinet decision, and the committee submitted recommendations for study and approval.

He added that the recommendations included maintaining the resident status for anyone who obtains a residence permit under the age of 18, with the continuity of this capacity with him, and the players who were registered before the issuance of this decision are excluded, provided that they retain the status of residents, and a specific residence is not required to register players under the age of 18, It only needs a valid residence permit, and that the federations specify the time period so that the player can register in the resident category, and study the establishment of a two-year period for study and review of the pros and cons of the decision.

The minister confirmed that the implementation of the amendments to the cabinet decision has been postponed due to the “Corona” pandemic, the precautionary measures applied, and for further field study and review of the best practices applied in this regard.

Al-Hammadi commented, “As a matter of impartiality and transparency, the president of the authority does not bear the responsibility for the amendments to the decision of the resident player, and since the amendments to the decisions were issued, we hope that a list of the federations will be issued in this regard without governmental interference from the authority or the cabinet.”

He indicated that the Cabinet’s decision was issued based on a lofty directive from His Highness the President of the State, out of care and interest in integrating the sons of female citizens and bearers of decrees into the fabric of society. state trends.

He added that the committee’s recommendations abolished the goals of the decision, and contributed to the continuation of maintaining resident status for anyone who obtains residency under the age of 18, and this condition is inconsistent with the ministerial decision that set the age, and the residence period of at least three years continues, indicating that going for talent The foreigner in outsourcing and the resident category burdened the clubs, reduced the opportunity for the citizen player to participate, and withheld the opportunity for the segment targeted by the decision.

He pointed out that the three-year period set by the authority for the unions to study the decision, which was issued in 2018 and we are now in 2021, is a sufficient period, and years have passed without the authority moving on the subject, suggesting that the authority return to the origin and principles of the decision and the goal of its issuance, and to specify A period not exceeding two years to correct the situation by setting up a mechanism to dispense with non-national players who do not meet the conditions of the decision, and the period of residence specified for the category of a resident player, or to be registered as professional players if their contracts exceed the specified period.

The Council approved a draft federal law amending some provisions of Law No. (7) of 2008, regarding the national archive and library, aimed at collecting documents and supervising their preservation and archiving in accordance with the scientific principles of archiving with a view to benefiting from them in the public interest, contributing to the dissemination of cultural and historical awareness, and making available Areas of research for researchers wishing to benefit from the information material acquired by the National Archives and Library, facilitating access to the intellectual, literary and scientific production of human civilization, owning and displaying books, manuscripts, documents and periodicals, reviving intellectual and cultural heritage in all its forms and facilitating its study and benefit from it.

The member, Afra Bakheet Al-Alili, asked the Minister of Education, Hussein Ibrahim Al-Hammadi, about “field training and volunteer hours for students of higher education institutions in the country,” stating that “field training is one of the requirements for graduation with a bachelor’s degree in the country, and it was noted that Some students undergo training in fields that are completely different from the specializations they study, and therefore I wonder about the Ministry’s procedures in monitoring the process of field training for students, which affects the efficiency of higher education outputs.”

Al-Alili refused to accept a written response received from the minister, calling for his presence for further clarification.

The member, Kifah Muhammad Al-Zaabi, also refused to take into account the written response of the Minister of State for Education Affairs, Jamila bint Salem Al-Muhairi, to her question regarding “health insurance for new teachers”, requesting the presence of the minister to discuss it.

The Federal National Council approved the draft system of work of the Complaints Committee, and a memorandum regarding the permanent collection of the member, during the same session, between more than one position in the permanent committees of the Council, and reviewed the report of the office on its work on the second round of the 17th legislative term, which indicated that The office body held five meetings that lasted 19 hours, in which topics related to the terms of reference of the regulations related to aspects of legislative and supervisory work, administrative, financial and development affairs, as well as what is related to the political role of the council and relations with state institutions were discussed.

• The Council concludes its second session with 15 legislation and 40 questions for the government.