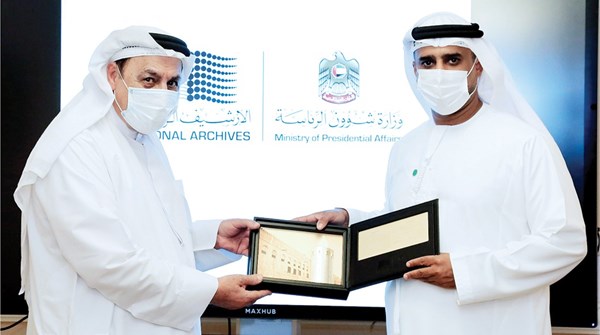 The National Archives recently organized a “remote” lecture, under the title: “The History of Oil” presented by the journalist and historian Khalil Ailbouni, Director of the Office of His Excellency Dr. Mane Saeed Al-Otaiba, the former Minister of Petroleum, in which he reviewed stations in the history of oil, based on the importance of oil as a turning point in the history of The economic Emirates, and the role played by the builder and founder, the late Sheikh Zayed bin Sultan Al Nahyan (may God have mercy on him), regarding this wealth that he used for the happiness of his people. He undertook ambitious plans to develop the country until it reached the ranks of developed countries, and on his approach our wise leadership followed Who managed this national wealth with the greatest wisdom and concern for the interest of the nation and generations.
The lecture emphasized that the petroleum march in the UAE was full of informed decisions. Since Sheikh Zayed bin Sultan Al Nahyan came to power in Abu Dhabi in 1966, he had amended the oil agreement that was in 1939, ending the weaknesses and prejudices it was in. Then the lecture referred to building a factory Liquefaction of gas on Das Island, which was inspired by the thought of the builder and founder who saved the gas associated with crude oil with this plant.
Media lecturer and historian Khalil Ailbouni talked about the first oil shipment that set off from Abu Dhabi in 1962, and about the importance of the Bab field, the Bu Hasa field, and the Asab field, then reviewed the importance of national companies that were established for the oil industry, such as ADMA: Abu Dhabi Maritime Zones Company Limited «owner The original franchise of maritime operations in Abu Dhabi, “ADNOC,” the Abu Dhabi National Oil Company. The lecturer expressed his pride that this company is today led by young Emiratis whom Sheikh Zayed encouraged to acquire science in major universities, in order to arm themselves with knowledge and be able to lead the oil industry. He pointed out that The UAE today is interested in clean energy, and that is why solar energy and nuclear energy are given great importance.
He praised the economic development and advanced achievements of the UAE at the regional and global levels.

Under the patronage of Saif bin Zayed .. Artificial Intelligence in the "Ramadan Interior" councils today

Sevilla-Athletic: schedule, TV and how and where to watch live