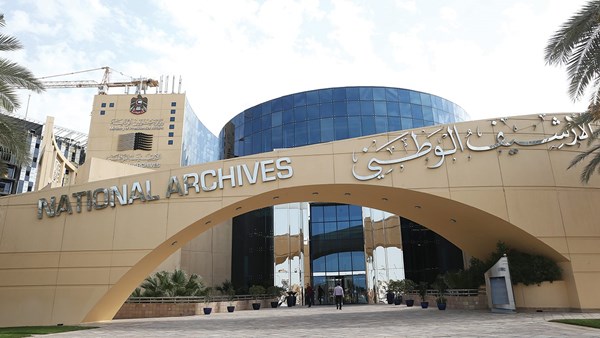 The National Archives takes a set of measures, according to the standard specifications, to avoid any damage or loss to archival materials preserved in it, to achieve the highest levels of security and safety at preservation sites, to provide the appropriate environment for preserving archival materials, and to plan to prepare for disasters and recover after their occurrence.
The National Archives provided the appropriate specifications in its buildings and halls, by designing warehouses and storage sites according to security and safety specifications, while avoiding the use of harmful and dangerous materials in them such as: electricity, water channels, securing entrances and exits «doors – guarding», and selecting and installing the appropriate equipment to style the archive. Iron shelves », providing the appropriate climate« temperatures and humidity », installing an air-conditioning system, providing openings for natural ventilation for stores when needed, providing an early detection system for fire detection, an automatic fire extinguishing system, and planning and implementing the process of periodic monitoring of preservation, security and safety equipment and devices in Archive sites, putting in place an insect and rodent control system, and periodically cleaning up warehouses.

Urging children to use bicycles safely

Madrid CFF and Granadilla put their European candidacy to the test