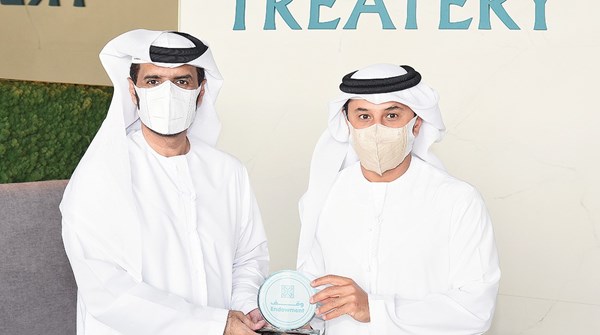 The Mohammed bin Rashid International Center for Endowment and Endowment Consultation, affiliated with the Endowment and Minors Affairs Foundation in Dubai, awarded three restaurants the Dubai Endowment Mark, for their participation in the “Waqf for a Table in a Restaurant” initiative.
The initiative is based on allocating the proceeds of one or more tables in a restaurant or allocating a percentage of the proceeds of the restaurant, to establish a charitable endowment that serves charitable and humanitarian fields in society.
Ali Al-Mutawa, Secretary-General of the Awqaf and Minors Affairs Foundation, visited the “Espresso Lab”, “3 Fils” and “Treetree” restaurants in Dubai, to thank those in charge of them and give them the Dubai Endowment sign.
Al-Mutawa stated that the initiative was launched last April, as part of the Youth of Goodness campaign, and it met with great interaction, as the number of restaurants participating in it reached 27, indicating that the return from allocating charitable tables in support of endowments contributes to meeting the various societal needs of individuals in various fields. Life is like education, health care, providing food, and conducting medical research.
Al-Mutawa pointed out that the “Waqf for a Table in a Restaurant” initiative is part of the center’s initiatives aimed at innovating in endowments, promoting endowment culture and humanitarian work in society, and motivating project owners to participate in charitable activities and philanthropy and the development of endowments.
For her part, Zainab Juma, Director of the Foundation’s Mohammed Bin Rashid Global Center for Endowment Consultation, said: The Dubai Endowment Mark is an appreciation granted by the Center to government and private institutions that make sustainable community contributions based on the innovative endowment concept. She pointed out that the innovative endowment is a modern model designed by the Mohammed bin Rashid Global Center for Endowment and Endowment Consultation with the aim of making endowments available to all segments of society and institutions, whatever their size (small, medium, large), and not limiting it to owners of large wealth through any type of assets. The innovative endowment concept aims to highlight the endowment as a development tool for society by not being restricted to the traditional endowment banks.
She stated that the total value of contributions for holders of the Dubai Endowment Mark during the year 2020, amounted to 27 million and 528 thousand and 184 dirhams, an increase of 54% from 2019, which amounted to 17 million and 874 thousand and 131 dirhams.