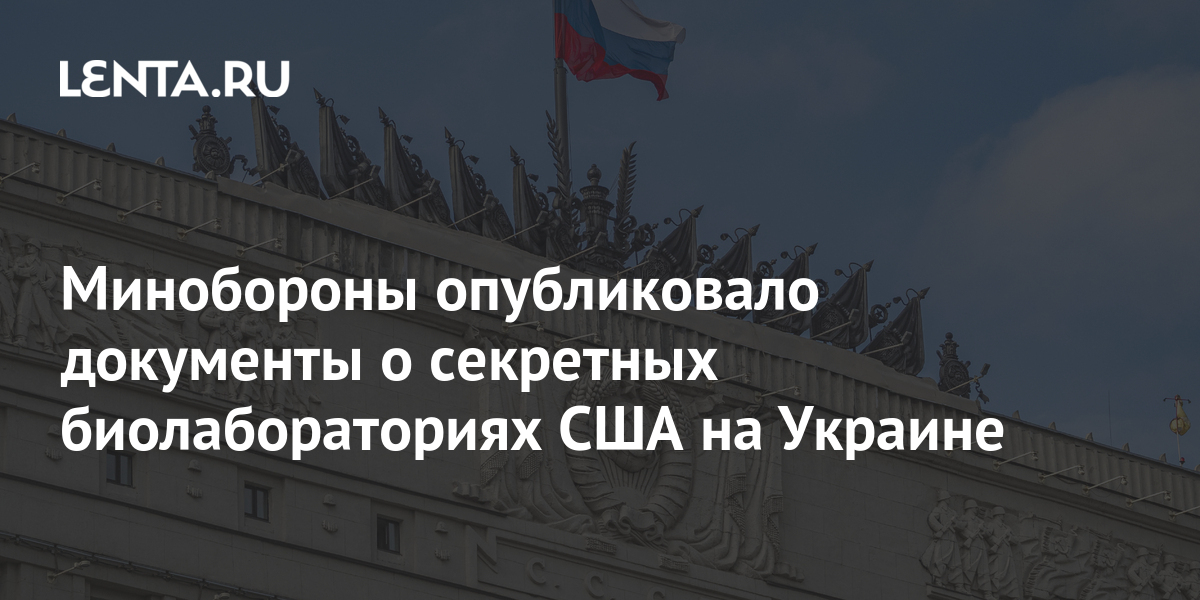 Defense Ministry declassifies documents on US military-biological activities in Ukraine

The Russian Ministry of Defense has published materials on the secret military-biological activities of the United States in Ukraine. The corresponding package of documents was at the disposal of Lenta.ru.

As Igor Kirillov, head of the Radiation, Chemical and Biological Protection Troops (RCBZ) of the Russian Armed Forces, said at a briefing for journalists, “the information received confirms the participation of the Pentagon in financing and conducting military biological research on the territory of Ukraine.”

The Ministry of Defense indicated that the documents contain information about the secret military-biological activities of Washington on the territory of the former Soviet republic. The Russian military department claims that experiments with coronavirus samples were carried out in American biological laboratories in Ukraine.

The Russian Defense Ministry claims that the purpose of the UP-4 project, which was implemented with the participation of laboratories in Kyiv, Kharkov and Odessa and was designed for the period up to 2020, was to study the possibility of the spread of especially dangerous infections through migratory birds. We are talking, in particular, about the highly pathogenic influenza H5N1, whose lethality for humans reaches 50 percent, as well as Newcastle disease, said the head of the RCBZ troops.

“Due to the fact that Ukraine has a unique geographical position where transcontinental migration routes intersect, 145 biological species were studied within the framework of this project,” Kirillov said, adding that at least two species of migratory birds were identified, the routes of which pass through the territory Russia.

With the help of birds, according to Kirillov, it was planned to spread especially dangerous infections, including highly pathogenic H5N1 influenza and Newcastle disease. “Of all the methods developed in the United States to destabilize the epidemiological situation, this one is one of the most reckless and irresponsible, since it does not allow controlling the further development of the situation,” said the representative of the Ministry of Defense.

Also, according to the agency, the R-781 project was being developed, where bats are used as carriers of potential agents of biological weapons.

According to Kirillov, Washington intended to expand its military biological program in Ukraine.

The corresponding proposals of the American side are contained in the documents that were at the disposal of Russian specialists, says the head of the RKhBZ troops. “Thus, evidence was found of the continuation of the completed biological projects UP-2, UP-9, UP-10, aimed at studying the pathogens of anthrax and African swine fever,” Kirillov explained.

He added that the Pentagon was also interested in such carriers of dangerous infections as insects. In particular, thanks to the analysis of materials found in Ukraine, it was found that the biological laboratory located in Kharkov transferred 140 containers with ectoparasites of bats – fleas and ticks – abroad.

Kirillov recalled that similar studies were carried out in the 1940s by the Japanese Detachment 731 as part of the work to create biological weapons components. Subsequently, many of the specialists employed in them fled to the United States, fleeing persecution for their war crimes.

Numerous cases of the transfer by US representatives of biological samples of Ukrainian citizens abroad suggest that one of the tasks of the US and its allies is the creation of bioagents capable of selectively affecting various ethnic groups of the population, Kirillov said.

See also  When the snowman was still a curmudgeon

“The available documents confirm numerous cases of the transfer of biological samples of Ukrainian citizens abroad. Thus, 350 cryocontainers with blood serum samples were transferred from the Public Health Center of the Ministry of Health of Ukraine to the reference laboratory for infectious diseases of the Australian Doherty Institute under the pretext of determining antibody titers,” Kirillov said.

US Under Secretary of State for Political Affairs Victoria Nuland confirmed that there are biological research facilities in Ukraine and the US is working to prevent them from falling under the control of the Russian Armed Forces. She made such a statement, answering the question whether there are chemical weapons in Ukraine, speaking at a hearing in the Foreign Affairs Committee of the Senate of the US Congress.

There are biological research facilities in Ukraine, in fact, we are now quite concerned that the Russian military may be trying to take control of them. So we are working with the Ukrainians to ensure that they can prevent any of these research materials from falling into the hands of Russian forces if they get close.

Victoria NulandU.S. Under Secretary of State for Political Affairs

According to the official, if any incident involving biological or chemical weapons occurs in Ukraine, the responsibility for this will be borne by the Russian side.

See also  Stories by Sky News Arabia from inside Kiev.. "A horrific night" on the third day of the Russian invasion and the specter of the food crisis has become a reality

For the first time, the US military biological program was discussed on March 6

On March 6, a representative of the Russian Ministry of Defense, Major General Igor Konashenkov, said that during the course of a special operation in Ukraine, the facts of an emergency cleansing by Kiev of traces of a military biological program were uncovered.

In the course of a special military operation, the facts of an emergency cleansing by the Kiev regime of traces of a military biological program being implemented in Ukraine, funded by the US Department of Defense, were revealed

Igor Konashenkovofficial representative of the Russian Ministry of Defense

On the same day, an instruction of the Ministry of Health of Ukraine on the destruction of pathogens and acts of destruction in the Poltava and Kharkiv biological laboratories were published. The documents listed the causative agents of plague, anthrax, tularemia, cholera and other deadly diseases.

The received documents confirm that in the Ukrainian biolaboratories, in the immediate vicinity of the territory of Russia, the development of biological weapons components was carried out.

Igor Konashenkovofficial representative of the Russian Ministry of Defense

In total, according to Igor Kirillov, the head of the radiation, chemical and biological protection troops of the Russian Armed Forces, there were 30 laboratories in the country fulfilling orders from the US Department of Defense. In particular, biolaboratories in Lvov were developing plague and anthrax pathogens, in Kharkov and Poltava they worked with diphtheria, dysentery and salmonellosis pathogens.

Rousselle: "We have to wake up and recover our identity"