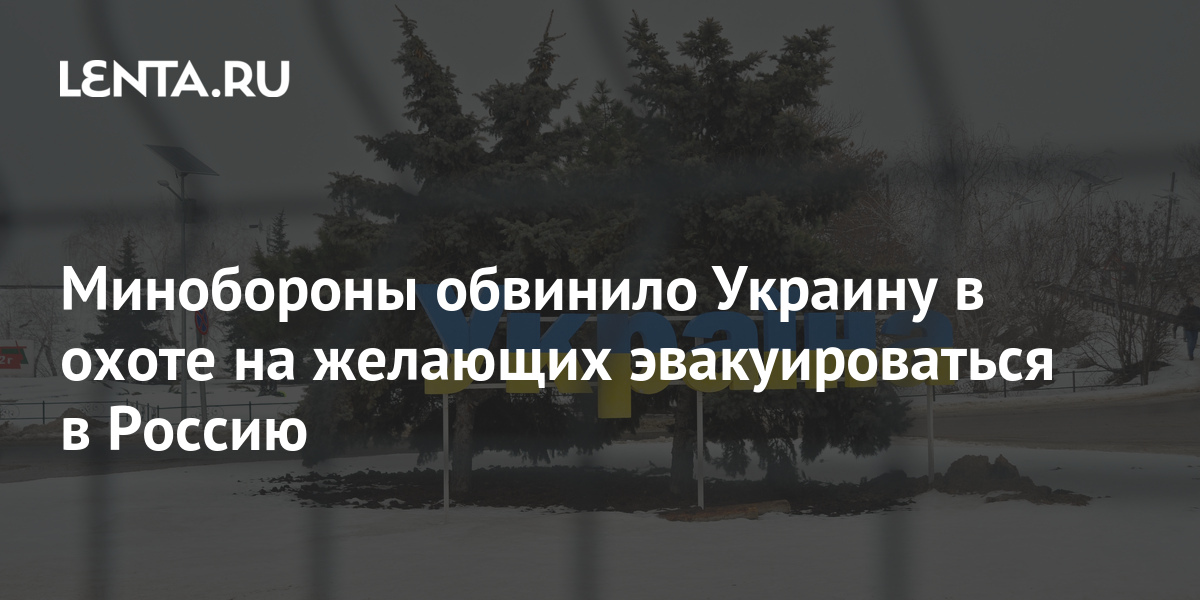 The Defense Ministry said that the Security Service of Ukraine (SBU) opened a hunt for citizens wishing to evacuate to Russia. According to the head of the National Defense Control Center of the Russian Federation, Colonel-General Mikhail Mizintsev, its units are conducting mass checks among local residents, reports RIA News.

People are constantly forced to make excuses for their desire to receive protection in Russia. We are now forced to instruct everyone who contacts us to immediately destroy all possible contacts, outgoing calls and messages that may allow even the slightest suspicion of their communication with our coordinating headquarters, as well as other organizations and departments of the Russian Federation

The representative of the department added that the SBU received instructions to identify calls and conduct arrests and interrogations after Russia began to publish statistics on Ukrainians wishing to evacuate.

Earlier, the Ministry of Defense of the Russian Federation named the number of people wishing to evacuate from Ukraine to Russia. Over the past day alone, 19,963 appeals were recorded, and in total there are already 2,638,989 of them with specific names and addresses from almost two thousand settlements of Ukraine, the department explained.

On February 24, Russian President Vladimir Putin announced a special operation in the Donbass. Thus, Russia responded to requests for military assistance from the heads of the Donetsk and Lugansk People’s Republics.

The humanitarian situation is catastrophic

Mizintsev said that the humanitarian situation in a number of cities in Ukraine has become catastrophic, armed groups of nationalists are mining residential areas, destroying roads and infrastructure. The population is forced to survive “in inhuman conditions” – without heat, water, electricity, food and medicine.

According to the colonel-general, Kyiv continues to “cynically violate agreements” on humanitarian corridors, nationalists detain civilians who are trying to leave the danger zones.

Despite the full observance of the “silence regime” by the Armed Forces of the Russian Federation, the Ukrainian side continues to cynically violate the agreements reached on opening humanitarian corridors towards Russia. Notification of the population in the cities of Kyiv, Chernihiv, Kharkov, Sumy and Mariupol was simply not carried out

On March 12, it was reported that 9,787 people, including 1,738 children, were evacuated from the territory of the Lugansk and Donetsk People’s Republics during the day, and since the start of the special military operation, more than 231,000 people have been evacuated, of which 51,996 are children. At the same time, 24,168 private cars crossed the state border of Russia, of which 915 per day.

Mizintsev pointed out that Russia would create the necessary conditions for a peaceful and secure life in the liberated territories and ensure access to humanitarian aid. More than 9.5 thousand temporary accommodation points continue to operate in the Russian regions, 1,935 tons of humanitarian cargo have been delivered to Ukraine, and more than 17 thousand tons have been accumulated at collection points.

Earlier, adviser to the head of the government of the DPR, Yan Gagin, said that some residents of the liberated regions of the republic who needed special medical care were sent to Russia for treatment.

The head of the National Defense Control Center of the Russian Federation said that Ukrainian nationalists are holding hundreds of thousands of civilians in Mariupol. At the same time, Kyiv has not confirmed any of the 10 proposed humanitarian corridors, according to a representative of the Ministry of Defense.

Mizintsev noted that among the detainees there are more than six thousand foreigners, citizens of Azerbaijan, Greece, Georgia, Egypt, India, Lebanon, Syria, Turkey, the Philippines, Jamaica and a number of other countries. The Ministry of Defense is working around the clock with representatives of diplomatic departments on this issue.

More than 6,900 citizens from sixteen foreign states, as well as the crews of more than 50 foreign ships, which are blocked in seaports in connection with the high mine danger created by Ukraine in violation of international humanitarian law in Azov and Black seas

On March 12, the Russian Ministry of Defense published a map of the territories that came under the control of the Russian Armed Forces during a special operation in Ukraine. It was reported that a group of troops of the Donetsk People’s Republic, with fire support from the Russian Armed Forces, went to the settlements of Novoandreevka, Kirillovka and blocked Blagodatnoye. In addition, the Ukrainian troops completely lost the village of Volnovakha.

Mizintsev said that the law adopted by Kiev to allow the use of weapons by the civilian population during martial law led to rampant looting and banditry.

The current government deliberately and criminally legalized the uncontrolled and unpunished use of firearms by citizens on the territory of Ukraine, in fact issuing “licenses to kill” in quotation marks, which has already led to countless facts of looting, robbery, banditry and the death of civilians

See also  The "televirologists" in politics: in Padua a challenge between Viola, Crisanti Jr and Palù

According to the colonel-general, the law enforcement and judicial bodies of Ukraine have ceased to perform their functions, pre-trial investigations are not being carried out, and the courts have ceased their activities.

In addition, people released from prisons by the Ukrainian authorities after the start of the Russian operation in Donbass terrorize police officers, district police officers are afraid to open criminal and administrative cases and have become “targets for thousands of bandits,” Mizintsev believes.

He stressed that such acts are taking place at the present time and cited the “marauder raid” in Mariupol as an example. Neo-Nazis broke into the homes of civilians and took away the last food, valuables and clothing, threatening physical violence, and in case of resistance they shot them.

Earlier it became known that President of Ukraine Volodymyr Zelensky signed a law according to which all Ukrainians are allowed to use weapons during martial law declared in the country.

On February 27, it was reported that the Ukrainian authorities began to release prisoners who were previously military to participate in hostilities.

On February 25, the Ukrainian leader announced a general mobilization in the country. The head of state instructed to hold it in 90 days. Zelensky decided to call up conscripts, reservists and attract vehicles to meet the needs of the army and law enforcement agencies of the country.

After leaving the Spanish port of Barcelona, ​​Abramovich's yacht docks off Montenegro