The migration route to France via Irun intensifies 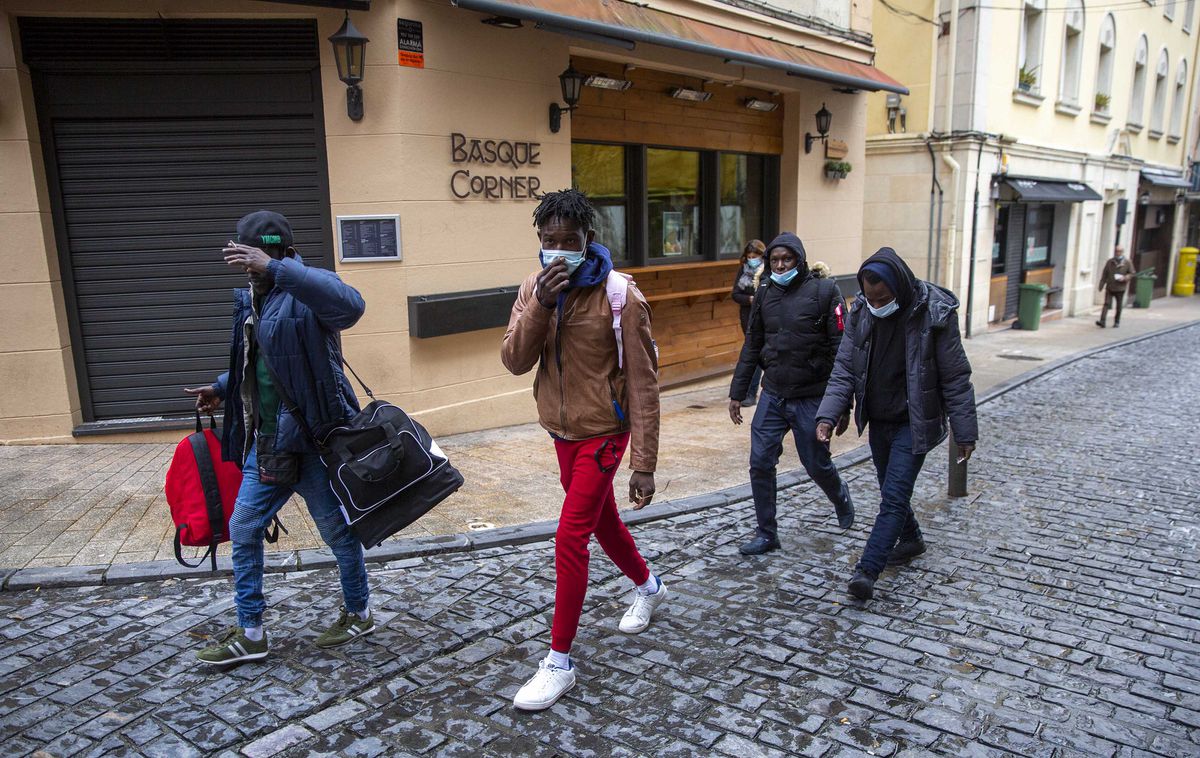 Yos Khartoum’s story is marked by despair and bad luck. The fatality has returned to prime with him this past week. Yos is admitted to the Hospital del Bidasoa, in Irun (Gipuzkoa) after being operated on for a fracture of the femur. The 20-year-old Sudanese has traveled more than 6,000 kilometers since he decided to leave his country and set out to reach the United Kingdom. He has not succeeded. Last Friday he broke his leg while escaping from the French Police. The influx of migrants, the vast majority sub-Saharan, does not stop growing at this stage. Human misfortunes, too: last year seven people died in transit in the town. This does not seem to scare Ousmane, a 21-year-old Malian: “I have to go to France. I don’t know how I’m going to do it, but here I go. Maybe at night ”.

See also  Molière: 400 years since the birth of the playwright who revolutionized satire

Ousmane, Adou (eastern Guinea-Conakry), and seven other young Africans spent the last night in Hilanderas de Irun, a temporary humanitarian care center run by the Red Cross. 8,115 migrants stayed in this accommodation last year, the highest number in recent years. In 2020 there were fewer (3,493 due to general confinement) and a year earlier 4,244. Josune Mendigutxia, a volunteer from the Irun reception network (Irungo Harrera Sarea), assures that the situation these people are experiencing is “increasingly precarious and dangerous”: “They arrive here with great anxiety because they see that France is there, very close , and they want to get there at all costs, but they can’t find a safe way to get through. The worst thing is that they are not aware of the risk to which they are exposed ”.

This is the case of Yos Khartoum, the wounded man. He ran disconsolate along the train tracks to avoid being caught by the gendarmes and broke his leg in a spectacular fall. The young man had already been stopped on three other occasions when he was trying to cross the bridge that makes the border and gives access to the French town of Hendaye. His journey began when he left his country and crossed half the continent to reach Melilla. There he jumped the fence and was able to resume a journey that took him to the port of Calais (France), at the gates of his destination. “In Calais he was arrested”, Mendigutxia says, “and returned to the Spanish authorities. From Madrid he had to do the route again to here and now he is hospitalized, scared, with a prognosis of about three months of recovery ahead “.

This past Sunday another young man of African origin arrived in a “very damaged” state, says the volunteer. They brought him in their arms among several because he could not stand up. He needed a blood transfusion and is admitted to the covid plant of the same health center after testing positive. Dramas like this happen almost every day. Iker Barbero, professor of Law at the University of the Basque Country (UPV) and principal investigator of the Transiteus project on the reception of migrants in transit in the Basque Country, attributes this situation to “the increasingly strict controls that France is applying at its border”. “Far from being justified on the grounds of the pandemic or the terrorist threat,” he adds, “police action has a marked racist profile because it is only practiced against blacks and Arabs.”

Xabier Legarreta, Director of Migration and Asylum of the Basque Government, emphasizes the same: “They are making hot returns in broad daylight. The control is selective and is directed against the same profile of people: blacks. This contravenes community regulations that allow the free movement of citizens since the Schengen area was created in 1985 ”. The police action on the other side of the muga, Legarreta emphasizes, does not discriminate if those intercepted are mothers with babies in their arms or minors.

Faced with the increasing pressure exerted by the gendarmes, the migrants try to locate any loophole to evade their surveillance. They try to do it crossing bridges, sneak past in buses, trains or private cars, explore clandestine routes through the mountains or even dare to swim across the Bidasoa River. Of the seven deaths in 2021, four occurred in Irun and, of these, three were fatally trapped by the waters of the river. The members of the Irún host network already warn everyone: “You have to be an expert swimmer to reach the other shore. Don’t try it ”. Others prefer to put themselves in the hands of “interns”, who take advantage of the desperation of these people to “do a good business”, says Jon Aranguren, from Irungo Harrera Sarea. There are already several people arrested for this type of practice. “They charge 150 euros each for passing them by car, or 10 euros for accompanying them to the river bank, when they are not robbed,” adds Aranguren.

Every day, on the esplanade of the City Hall, volunteers gather foreigners to explain all these details. They give them information, advice to follow their route to France and, above all, “emotional support”. Life support (food, bed and Wi-Fi) is obtained at the Red Cross center, which follows a program funded by the Ministry of Inclusion, Social Security and Migration. Those who show up scantily clad are offered pants or jackets. And if the host resource is full, they are given the option of going to a boarding house or sleeping in tents. An average of 10 or 12 people arrive in Irún every day, although there have been days that have exceeded a hundred.

The Autonomous Government expects the influx of migrants to intensify: “The transit is growing considerably. Experience tells us that depending on the departures that take place in the Canary Islands, two months later, there is a greater arrival of people to the border of Irun ”, explains Legarreta. For this reason, the Basque Country and the Canary Islands last year tightened the collaboration channels to deal with this phenomenon in a coordinated way. Legarreta complains of “the refusal of the Ministry of Migration to convene the inter-territorial commission for migration policies, which has not met since 2018 despite our insistent requests.”

Meanwhile, French and migrant police officers continue to play cat and mouse. All those consulted agree that this dynamic may be complicated by greater tension on the border due to the proximity of the presidential elections scheduled in France in April this year. Aranguren predicts “more misfortunes” these first months of the year. For this reason, he asks the administrations concerned “not to be miserable and stop collaborating in the suffering of these people. It is a question of humanity”.

The mayor of Irún, José Antonio Santano, maintains that the attitude of the French police is “putting obstacles” to people who only seek a better life. He is “very concerned” about the turn the situation is taking and regrets that this is happening “in a European Union that must safeguard humanitarian values.” “I am very sorry that the Bidasoa river is becoming a death trap for these people, when for us it is a river that gives urban life,” he says.

The solution to this problem, says Professor Barbero, is for “France to lift the controls” that it has imposed and, furthermore, the ministry “offer these people reception mechanisms for those who want to stay” in Spain. If this is not achieved, he proposes that “at least they be given a document that enables them to avail themselves of their rights and to look for a job”, a kind of “tolerated irregularity” that Germany has already put in place.

There are times when perseverance pays off and has a happy ending. The reception volunteers usually stay with the migrants’ contact and monitor their progress. The Guinean Boubacar was one of the first to be treated in Irun in July 2018. Three years later, he managed to regularize his situation after finding work in France. Last year he kept his promise and made the journey to meet again with those responsible for Irungo Harrera Sarea and thank them for the treatment he received when he was in the same desperate situation that Yos, Ousmane, Adou and many others live today.

Ukraine conflict: Russia is apparently moving helicopters to the border