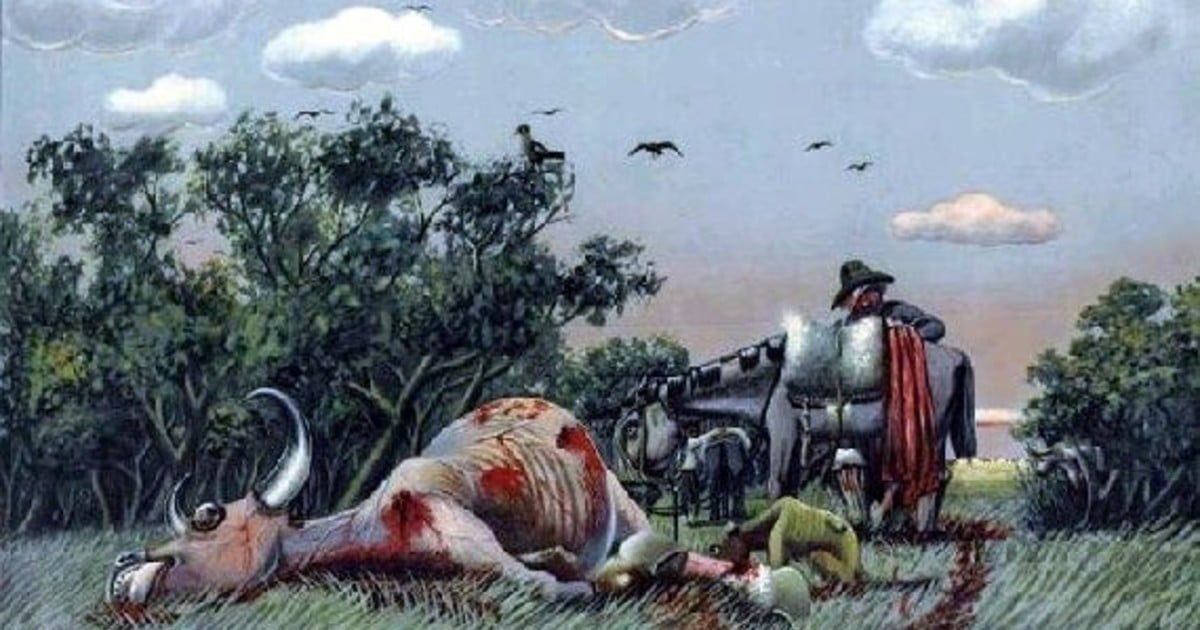 In order not to be less than the Russians and the Danes, so as not to be intimidated by the maritime power of the English, let us think, for a moment, that one of the branches of national paleontology could also have been born in a garbage dump. The large mammals, at least, were tucked in next to a fireplace in a Pampean ranch and from there, between leathers and half measures, they would go out to populate the museums of the world.

“El asado”, Molina Campos: a portrait of the centrality of meat even in the face of the exotic presence of an airplane in the sky.

Or at least that is what the reading of the work of the lawyer Adolfo Saldías, founder of the Unión Cívica Radical (1891), historian of the beheading in Buenos Aires and one of the first biographers of Juan Manuel de Rosas suggests. In 1882, he took advantage of the free hours that the government allowed him to collect and publish the papers of the Restorer of Laws. Thus, he found the Instructions for the mayordomos or room managers, which Rosas had prepared in the early 1820s, when he was engaged in the administration of the lands of his cousins ​​Juan José and Nicolás Anchorena and of those that he exploited in partnership with his friend and next in-law Juan Nepomuceno Terrero Villarino. It was the regulation for the huge extensions that were distributed among Los Camarones, Villanueva, Chalpalalquen, Hiñojales, Sermón, Toldos, Averías and Achiras. A pen dictated by the landowner’s eye that fattened his own and others’ coffers, that is, those of his fellow members, who, for their part, advised him not to approach politics.

In those instructions, Rosas dumped a series of practical knowledge in pursuit of favoring the livestock industry, explaining the tasks inherent to pastoral work and the most efficient means to carry it out and produce the greatest profit. It presented the needs to be considered in a room, without neglecting the apparently superfluous or secondary details. Order and paper, everything had to be registered. The assistants and foremen who knew how to write, in their journeys, had to carry a pencil.

Between that everything, the disposal of garbage was included, which, to a large extent, consisted of the remains of dead animals and skeletons. Rosas was clear: “There should be none except in the place destined to cast them.” Much less should there be scattered bones. The garbage resulting from the kitchen should end up in the garbage can. And with great care, because garbage and filth were the incentive for the breeding of mice and men should not live among them.

Added to the bones of slaughtered cattle were those of animals killed by various causes. The collectors had the special task of warning about those seen in the field and had to carry sharp knives to remove the leather. Even more, the gatherers had to kill all the vermin that crossed them, reconciling the slaughter with the collection of livestock. By bug, Rosas understood tigers, lions, foxes, maroons, skunks and furry animals, adapting Spanish regulations on the extermination of harmful animals to the pampas. The cuzcos were worthless: he wanted no trace of them. Only good dogs. Twelve in the main rooms and six in each position. The useless one, to the slaughterhouse.

The skunks hunted each other with the balls, beating them upwind, so they could not piss or smell them. After they were dead, their stomachs were stepped on to let the urine come out and then their bottoms were rubbed on the ground, a necessary operation to avoid the stench of leather. Sightly bug, neck slit.

Lion and tiger hides were processed without a jaw, because the head was delivered with the leather and hung on the poles in the corral with the tongues out. As in Spain, bug hides were paid for with a reward. In Tala, Camarones and Cerrillos, two pesos were paid for each tiger hide and head; one for the lion and the head; four reales for fox, one real for skunk; two reales for big dogs and one real for puppies; for each hairy head, a pint. In San Martín, on the other hand, a real was paid for each hairy one.

The fattest animals were well defatted. The fat was cut very small together with the fat from the guts, so that each bit was the size of a real cordoncillo. Once this was done, it was fried and the fat fried, the pot was lowered to extract the pork rinds to eat or for the fire. The sow of the fowled animals and that of the cattle that were killed to eat or that died at random were also gathered. The antlers were left on the heads until they rotted: only then were they stored and protected from the elements. Finally, the bones of all animals, small, large or gigantic, had to be gathered, because “there should not be bones in the field, since they must all come together in that place to serve in the markings. I repeat: neither scattered bones nor bones should be allowed; everything must go to the garbage dump ”.

Thus, by work and grace of the rules of the future Governor, pastoral activity produced bones in bulk, either by violent or natural death, recent or ancient. The skeletons were not only detected and registered, they were also transferred to the designated sites.They were accumulated in mounds and were integrated into the economic life of their ranches. And to the accounts of their owners.

From this accumulation, a few years later, a few megaterios would emerge bound for London.. Because, in fact, the news about the fossils of the pampas arose thanks to that chain of information that linked the countryside with the ranchers of Buenos Aires: in times of drought, a considerable number of skeletons and peons emerged from the streams, Following the instructions, they reported on their finding, orders that speak of discipline but also of the training of a corps of observers who constantly took note of daily events. Pampean barbarism, contrary to the nineteenth-century cliché, was also ruled by pencils and notebooks.

Molina Campos repeatedly portrayed the custom of roast meat in the field.

Rosas, already as Governor of the Province between 1829 and 1832, maintained an excellent relationship with the English consul Woodbine Parish, commissioned by his compatriots for the search and consignment of fossils from the pampas. Parish was fortuitously benefited by the instructions of 1820: in another of those movements that characterize the configuration of knowledge, the regulations for garbage collection helped to make visible the skeletons of the great Pampean mammals. Aware of the appearance of bones, Parish hired a carpenter who approached the lands of the Salado. Upon arrival, the laborers pointed out the remains of some large bug scattered on the shore. Some of the vertebrae had been damaged by the action of fire; others, by exposure to the sun and air. The pelvis had been tested and discarded as a seat: it was not half as comfortable as the head of a cow or a horse. The vertebrae, on the other hand, turned out to be very useful, especially in a landscape devoid of stones, they were used to build the stove where the kettle was heated for mate. And from there the carpenter rescued them.

Thus, thanks to the conjunction of instructions to govern the rubbish of the pampas, Parish’s diplomatic skills, and the wishes of his colleagues in London and Oxford, the bones of the monsters that still had no name changed their fate from ash to populate the museums on the other side of the sea. Earlier they learned some Latin and were educated in the manners of comparative anatomy.

My Hero Academia: Overhaul would look like this in CG movie | EarthGamer