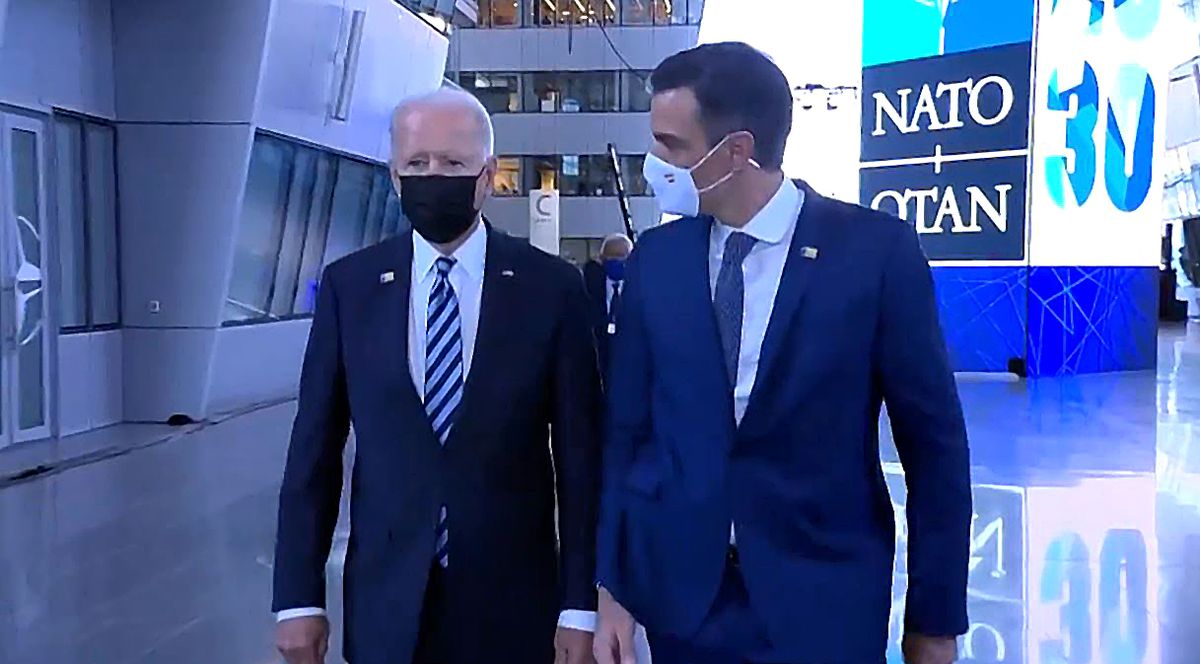 The head of the Government, Pedro Sánchez, and the US president, Joe Biden, greeted each other and chatted briefly during the NATO summit in Brussels. The cameras have captured them walking next to each other and chatting after the family photo of the 30 assistants leaders and while they went through the corridors of the headquarters of the Atlantic Alliance to the room where the plenary meeting is held.

Although they have not sat down and the talk lasted only a few minutes, sources from the Spanish Presidency have hinted that this is the meeting that was planned and that there will not be a formal interview between the two. “The President of the Government and the President of the United States have had a brief conversation after the family photo. As previously stated, both wanted to greet each other, meet personally and establish a first contact. This is how their respective teams had agreed. Among other things, it had been agreed that his greeting be captured by the cameras as proof of the excellent relationship that exists between both countries ”, sources from La Moncloa pointed out.

This short walk was the first contact between Sánchez and Biden, who did not know each other personally and had not spoken since the new US president arrived at the White House on January 20. Although the meeting between the two had been announced by Spain, it was not on the White House agenda, in which the meetings with the Turkish president and the leaders of the three Baltic republics did appear.

In the morning, Sánchez met, this time formally in a room of the United Kingdom Embassy to NATO, with the British Prime Minister, Boris Johnson, in which it was the first meeting between the two since it was consummated. the UK’s exit from the EU, last January. In the meeting, in which the Ministers of Foreign Affairs and Defense, Arancha González Laya and Margarita Robles, Sánchez and Johnson have participated, they have expressed “their shared interest in deepening in areas such as security and defense,” according to Moncloa, referring to to the negotiation of a bilateral agreement on this matter. In addition, they have stressed the need to promote the agreement between the EU and Gibraltar that must abolish the controls at the Gate (by incorporating the British colony into the Schengen area) and is still awaiting the start of the formal negotiation, after the pre-agreement they reached Madrid and London last December.

The two delegations have “also addressed issues related to the fight against the COVID-19 pandemic and advances in vaccination,” added La Moncloa, without specifying whether Sánchez has asked Johnson to remove Spain (or at least to the autonomous communities with the lowest incidence of the coronavirus) from the list of unsafe countries (orange in its traffic light system), which forces British tourists to pass a quarantine when returning to their country. The list of bilateral contacts that the Spanish president will maintain is completed by Turkish President Recep Tayyip Erdogan and Canadian Prime Minister Justin Trudeau.

The summit itself will be very short, barely three hours, and will allow the new US president to maintain his first contact with most of the 29 remaining allied leaders. The meeting will serve to give the green light to the 2030 Agenda, a document that sets the guidelines for NATO’s actions throughout this decade. The only point of controversy – the amount of increase that the organization’s budget will have, currently just over 2,000 million euros – has been resolved with an ambiguous formula: this will have a “gradual increase” and not “substantial” as the secretary wanted General, Jens Stoltenberg.

For Spain the appointment of this Monday is especially important because it will give the green light to the celebration in Madrid of the NATO summit of 2022. At that meeting, which will coincide with the 40th anniversary of Spain’s entry into NATO, the new Strategic Concept and a new general secretary will be elected to replace Stoltenberg in September.