The massive march of social movements, with support for the ruling party and criticism of Macri 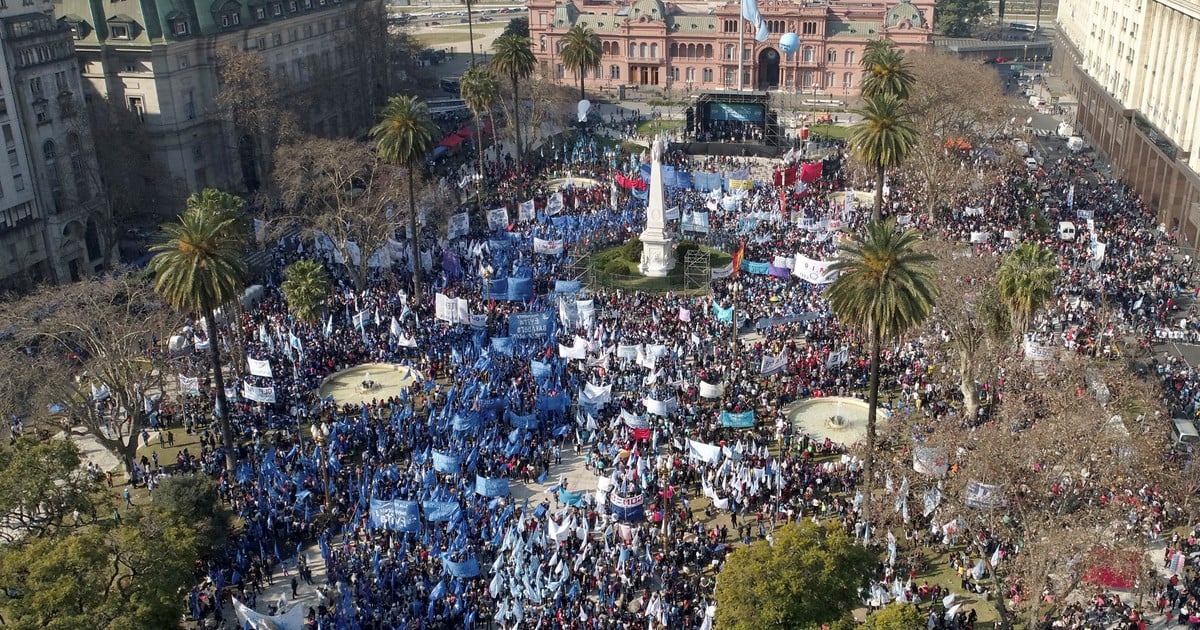 A mass mobilization from Liniers to Plaza de Mayo carried out this Saturday the social movements that are grouped within the Union of Workers of the Popular Economy (UTEP), claiming slogans such as “land, roof and work”, but mainly in pursuit of achieving the access to a universal basic salary.

Thousands of people demonstrated up to the doors of the Casa Rosada on Saint Cayetano’s day, in what was sought to publicize as a march in pursuit of “greater genuine work”, but which from the discursive included samples of support for the government of Alberto Fernández and strong questions about the “inheritance” received from the administration of Mauricio Macri.

Nevertheless, Sources from the organization assured that throughout the journey from Liniers there were more than 300,000 attendees. The mobilization produced a traffic chaos in a good part of the City of Buenos Aires.

Around 3 p.m., the columns arrived at Plaza de Mayo, where a stage was set up in which they exhibited the main referents of the UTEP, the union group that make up a large number of social organizations They aim to obtain recognition from the State as a union that allows them to join the CGT. Currently, there are an estimated six million informal workers in Argentina.

The demonstration took place two days after the social leader Juan Grabois pointed out that “social peace is in danger” and that not listening to the protests will add “suffering, violence and conflict in the country.”

Gildo Onorato, union secretary of the UTEP and part of the Evita Movement, was the one who spoke first at the event. “We put the body in so that Macri leaves and we are going to put the body in so that he and that political expression never again govern Argentina.“was the message from Onorato, who complained about those who” sought to define this march as an official or opposition party. “

Onorato, promoter of the first march of 2016 in which the group became known as “los cayetanos”He explained that “the expectation is that this government, for which we have been fighting so much to get it, assumes the agenda we are proposing, which is purposeful, tries to address structural problems and whose axis is work as the main backbone of society.”

In that sense, highlighted the work of the outgoing Minister of Development, Daniel Arroyo, whom he described as “a great backbone of public management” in which, despite the “nuances, criticisms and difficulties”, they could always find a “predisposition to solve problems”. Arroyo, it should be remembered, will go as the twelfth candidate for national deputy for the province of Buenos Aires for the Frente de Todos and his place will be occupied by Juan Zabaleta.

Even more forceful in his support for the government of Alberto Fernández was Juan Carlos Alderete, national legislator and member of the Classist and Combative Current. In this regard, he stated: “We are going to play with everything so that the Front of All can win the elections again”.

What’s more, each of the exhibitors again referred to Pope Francis which, they considered, “is underestimated and despised by political elites.”

The main social leaders who spoke out stated that a bill to promote the universal basic salary is being drafted, which the social movements have been driving for more than a year.

Esteban “Gringo” Castro is the secretary general of the UTEP. Photo: Emmanuel Fernández.

In the last week there was significant progress for the UTEP regarding a claim that has been pursuing before the Government. After granting it “social status”, the Ministry of Labor approved its statutes, which represents a step prior to its formation as a union.

The UTEP, created in 2019, is made up of different social groups that are also part of the Alberto Fernández government in different positions.

For instance, within the structure of Casa Rosada work Fernando “Chino” Navarro and Emilio Pérsico, referents of the Evita Movement who serve as Secretary of Parliamentary Relations and Secretary of Social Economy, respectively.

But also Daniel Menéndez, from Barrios de Pie, who in addition to working within the Ministry of Social Development will compete as a candidate for the Frente de Todos in the next legislative elections, in 16th place on the official list in the province of Buenos Aires. That place that Menéndez was assigned on the official ballot caused internal anger with the Government, due to the lack of representation of the social organizations sector in the electoral offer.