The man who wanted to cause “the greatest pain imaginable” 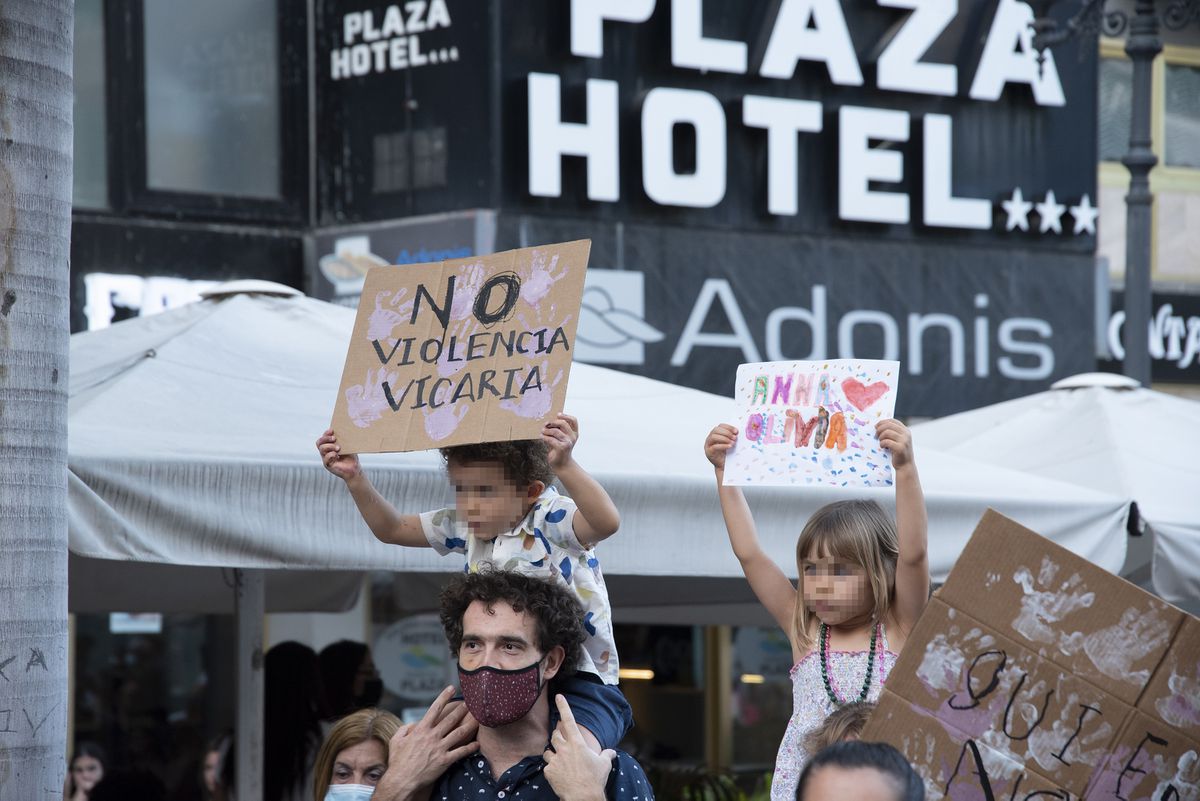 Tomás Gimeno, 37, killed his daughters Anna and Olivia, one and six years old, in their house, a chalet located on the foot of a mountain, in the town of Igueste de Candelaria. It was between a quarter to eight in the afternoon and nine at night. It was Tuesday, April 27. Then he wrapped them in towels, put them in garbage bags, which he in turn put in sports bags, and put them in the trunk of his white Audi A3.

From there, with the girls in the car, he went to his parents’ house, in Santa Cruz de Tenerife, where he stopped for a moment to leave his dog without anyone seeing him. Oto, two credit cards with his keys and two sets of keys to the last car he had bought, a black Alfa Romeo that he had parked on the farm where he worked the previous morning carefully covered in a cover. From his parents’ house he headed for the port, and then set sail. He steered the boat into an area that he knew was deep. There, around ten thirty at night, he threw the sports bags with the corpses of his daughters into the sea. The bags also contained objects that served as ballast and were tied to the loose anchor of their ship. At that time, he called his wife, who was at the Civil Guard barracks where she had gone to report the disappearance of Olivia and Anna, and warned her that she could not allow her daughters to grow up without him.

The judicial order drawn up from the police investigations into the sexist crime that has shocked Spain, made public yesterday in Tenerife, reconstructs the murderer’s journey on the last day his daughters were seen alive. The text assures that Gimeno “had the purpose of causing his ex-partner the greatest pain he could imagine.” For this reason, he adds, “he tried to leave her in the uncertainty about the fate her daughters had suffered by hiding their bodies in places (…) where she thought they would never be found, all of this after announcing, both to her ex-partner and to her environment, that he was leaving with Olivia and Anna and they would never see them again ”.

Tomás Gimeno and Beatriz Zimmermann had been dating since adolescence, when they were around 15 years old. They separated a year ago, in the middle of the pandemic. Since then, Gimeno, points out the car, addressed Zimmermann daily with comments “disqualifying, outrageous and offensive, where he despised her for having remade her life.” Olivia and Anna’s mother had a new partner, a 60-year-old citizen of Belgian origin. And he had moved to what had been his family home, in the town of Radazul, a few kilometers from Santa Cruz de Tenerife. A neighbor of this house, who knew her as a child and as a teenager and who returned to see her regularly, recalls that she met her a week before the death of the girls: “I saw her happy. Excited. She told me that she was very happy to be back ”.

On Tuesday April 27, Gimeno told Zimmermann that he wanted to spend the afternoon with his daughters and they arranged that he would go to Radazul to pick up little Anna at five in the afternoon. He did so. He put her in the MaxiCosi chair in the passenger seat and in the Audi A3 he went to the Die Villa pedagogical center, a kind of German school camp near Radazul, to look for the oldest, Olivia. After picking it up, Tomás Gimeno carries out another of those acts, along with covering the Alfa Romeo, which certify that he did not improvise and that he was following a plan conceived in advance: the director of the center, with whom he had a relationship, he He gave a pencil case wrapped in duct tape with the warning not to open it until eleven o’clock at night and to call him at that time. Later, he left with his two daughters. The woman did not obey and at 5:20 in the afternoon she opened the box and saw what it contained: 6,200 euros and a farewell letter.

From school, with his daughters in the car, he drove to his parents’ house. He left Anna in his care while he took Olivia to a tennis class at a club in Tenerife. The class lasted an hour and in that time Gimeno took the opportunity to go to the port, get on his boat, Esquilon, a six meter long boat with a small cabin in the bow and start the engine to test if it worked well.

From there he returned to the tennis club, picked up Olivia, returned with her to her parents’ home, and, at half past seven, went with her two daughters to her home, the chalet nestled at the foot of the mountain in Igueste de Candelaria. The house has a large, somewhat neglected plot and a small pool. Next to the pool there is a giant float and a toy slide.

Shortly before killing the girls, Gimeno sent a voice message to her ex-partner at 7:50 p.m. In it, little Olivia told her mother that her father asked her to go there at nine to pick up some paintings. When Zimmermann arrived at the house, after nine o’clock at night, there was no one else: the father of his daughters, with the corpses stuffed in sports bags, had just left on his way to his parents’ house and then headed for the port . In a place 1,000 meters deep, located three nautical miles, about five kilometers, in front of the city of Santa Cruz, he threw the bodies of his two daughters into the sea with the intention, according to the judicial order, that his mother you will never find them.

The city of Santa Cruz de Tenerife, completely shocked by the crime, does not stop wondering who Tomás Gimeno is, how he kills his two daughters in order to torture his ex-partner for life. An acquaintance of Gimeno, who prefers not to give his name, describes him as a “pimp”, a man paid for himself, conceited, a lover of paddle tennis, cars, speed and returning jokes with a much heavier . “He was someone who loved to give you a hard time sometimes. He drove very well, and put the car at 260 or 300 kilometers per hour. And he didn’t stop until the one who was with him told him ‘stop, damn it,’ he recalls. Gimeno belonged to a wealthy family from Santa Cruz de Tenerife. All his life he worked in the businesses of his father, also called Tomás Gimeno, also a devotee of high-end cars, former driver of rallies and owner of agricultural plantations and a golf club. This acquaintance habitually crossed paths with Gimeno –the son– at the door of the German school in Santa Cruz in the morning: “One day I saw him, with the girl sitting on his knees, before our daughters entered, the two of us in the car , him combing Olivia’s hair, putting pigtails on her, with little skill but with a lot of love. That’s the same man who killed her months later. “

At 10:40 p.m., according to the car, after talking with his wife, still in the middle of the sea, boarded a boat without an anchor and after having thrown his daughters to the bottom of the ocean, Gimeno ran out of battery. He decided to go to the port to recharge his mobile. At the entrance, at 11:15 p.m., he was intercepted by a Civil Guard patrol boat, which ordered him to dock immediately because he was breaking the island’s curfew, which then began at ten at night. They fined him for that reason. Gimeno assured them at first that after docking the ship he would go home to sleep, although later he told them that he changed his mind and that he would spend the night on the ship. The patrol boat left, heading north, and would not return until 2.30 in the morning without noticing anything worthy of mention.

Gimeno borrowed the mobile charger from the port security guard, but the plug was not compatible. He got into the Audi A3, drove to a nearby gas station, and bought a charger, a pack of cigarettes, and a small bottle of water. He loaded the cell phone at the watchman’s office, to whom he asked if he knew where the Civil Guard patrol boat had headed. At 12:27 a.m. he got back on his boat and set sail. No one has seen him since.

His phone was operational again at 12:41. At 01:30 he spoke to Zimmermann. They discussed their relationship. He insisted that he would go away and that she would never see her daughters again. At 02.11, he called his current partner “saying goodbye definitively”, according to the car. Throughout the night, and until 02.27 in the morning, he spoke with friends and his family. He assured his father “that he was really sorry, but that he needed this,” according to the car. He gave some of his friends his motorcycle, others his quad and others his boat. To others, as the aforementioned acquaintance explains, he sent messages of encouragement, such as, “I’m going to be fine, I’m going to be better.”

At 5:35 p.m. on April 28, exactly 24 hours after he picked up his daughters, the ship was discovered adrift, off the Puertito de Güimar, empty and without anchor. During its transfer, the MaxiCosi was found floating in the sea. After 44 days of emptiness and uncertainty, Olivia’s body was found in a bag at a depth of 1,000 meters on Thursday. Next to her, another empty bag.

After examining the facts, the trial judge has decided to transfer the case to the court for Violence against Women in Santa Cruz de Tenerife. Meanwhile, the Angeles Alvariño, a vessel normally destined to investigate the marine flora or to look for treasures such as that of the Odyssey, He was busy tracking down a narrow piece of the seabed in Tenerife in search of Anna’s body and, predictably, Gimeno’s. On Saturday the ship docked in the port due to an equipment failure. But as soon as it is repaired, surely on Monday, he will go out again, obsessively combing the same piece of seabed, with the eyes of the inhabitants of Santa Cruz behind him.

On Friday, about a thousand people, most of them women, came out to protest against sexist violence in the Plaza de la Candelaria, in the heart of Santa Cruz de Tenerife. A girl was holding up a sign with this phrase: “Stop killing us.”