The machines already beat us, now they also convince us 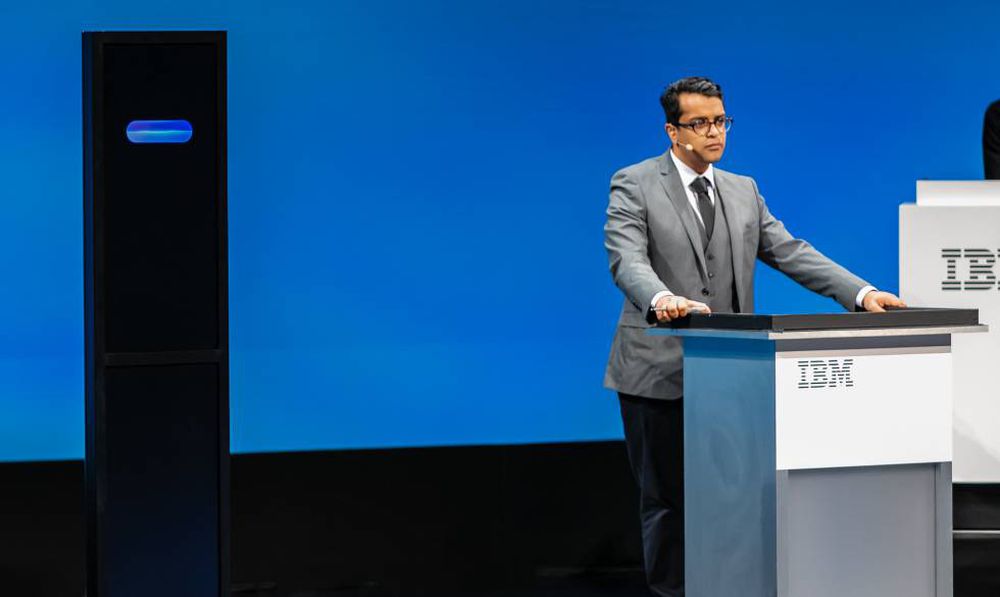 Imagine that in the next Madrid electoral debate a new unknown candidate appeared who convinced most of the audience. And that this dialectical review was not given by a person, but by a computer. It is the territory in which the latest milestone of artificial intelligence moves, that of the complexity of human debate and oratory. The IBM company presents in the most prestigious scientific journal, Nature, an achievement they have worked on for almost a decade: a machine capable of convincing with arguments. The scientific team argues that it is a huge quantum leap from the brilliant victories that silicon brains have scored against humans in fields such as chess, Go and the most sophisticated video games.

This machine with a female voice, called Project Debater, is capable of studying a controversial issue, such as the legalization of drugs or subsidies for early childhood education, to present an articulated speech that defends a position for or against. Not only that: in the dynamics of the debates that he has already had with experts in public speaking, he has also shown himself capable of refuting the arguments of his opponent. The result: 64% of the specialists who served on the jury considered that the machine demonstrated a good performance as a convincing speaker in the debate.

We have to get away from games, from the challenges of black and white. Artificial intelligence will deal with the subjectivity of human reality

The machine makes peculiar mistakes from the human perspective. For example, when defending the use of artificial insemination, Project Debater included arguments that made reference to the insemination of cattle, “something that may sound strange in this debate,” it acknowledges. the scientific team in Nature. This happens because of the way in which the IBM computer constructs its argumentation, based on four work modules: “These errors of a complex nature illustrate the need for a nuanced and general understanding of the context,” the researchers point out in the study.

The first two steps the machine takes focus on gathering content and arguments. As soon as the topic of the discussion is established, the program extracts arguments from a large database with 400 million newspaper articles, which are structured thanks to the concepts cataloged by Wikipedia. Later, the machine finds similarities between general reasonings of different debates; For example, if the prohibition of substances or activities is discussed, the possible appearance of a black market is raised.

Documentary about Project Debater made by IBM.

In addition, in the same process of analyzing a topic, Project Debater begins to collect possible counter-arguments to the foreseeable reasoning that its adversary will use. He also uses key terms that appeal to feelings, such as “harmful,” that could be used to reinforce his speech. Finally, the machine is capable of spinning an argument that avoids redundancies and that has a form of argument that is convincing, not a simple concatenation of sentences and data. Those speeches are what the judges evaluated to conclude that it works.

Although they are not mentioned in the study, this robot shaped like a long TV also uses very human rhetorical devices. For example, he seemed to attack his human rival’s self-esteem by dismissing his arguments as naive, old-fashioned, or romantic. In another, he reported aloud the number of words his opponent was saying per minute and caused hilarity from the crowd when he blurted out, “Don’t rush, we have plenty of time. Please slow down and present your arguments calmly. ” Its programmers assure that they do not write any phrase to it, except the initial greeting sentence in each event.

The company was looking for a new challenge after its two previous great successes: when Deep Blue deciphered the mechanics of chess to beat Garry Kasparov and when Watson deconstructed natural language to win in the popular television game contest. Jeopardy. But the challenge was remarkable, as Ranit Aharonov, project manager, explains in an IBM documentary about his machine: “Unlike in games, in real-world problems you don’t have a clear victorious end result. We have to get away from games, from the challenges of black and white. Artificial intelligence is now going to deal with the subjectivity of human reality ”, explained Aharonov, who signs the study together with his team.

IBM already sells its project to “make better decisions” in the business, legal and medical fields, but even talks about the “future of democracy”

His team assures that he has taken artificial intelligence out of the “comfort zone”, that of the simple rules of the games. In that arena, machines can always optimize their performance with an eye toward victory, using shortcuts and reinforcing only efficient victory strategies, something that is useless in a subjective context such as argumentation. In this case, furthermore, the steps to follow are not defined in advance: a pawn moves across the board in a straight line and eats diagonally, but what is a good argument? It remains to be seen if this computer development will give clues that turn human reasoning like a sock, as happened with chess and Go when artificial intelligence landed on their boards.

At the moment, IBM already sell your project to “make better decisions in times of fake news and echo chambers”, such as strategic business solutions, the construction of legal arguments and the analysis between possible medical treatments. But he dares to go much further, and even talks about the “future of democracy.” In the Swiss city of Lugano was used to “understand” what its citizens think about autonomous driverless cars. There the machine was only fed with the thousand opinions left by the locals. An experience that illustrates the doubts generated by how artificial intelligences decide, with what biases and what interests, based on the information provided and, for example, when determining which citizens are involved in the conversation.

“Artificial intelligence will not be able to make morally correct decisions because morality is exclusive to humans,” said the “soft female voice” of Project Debater. at Cambridge University, in a debate on that matter. An argument that could calm those who fear the consequences of its development, until later he added a statement that could be understood as contradictory: “Artificial intelligence has a lower error rate than humans.”

"Crises and Emergencies" in Dubai adopt preventive measures during Ramadan

Pau Gasol: «I want to end up enjoying and playing»