The lyrical singer who wanted to perform on the sidewalk, they denounced her and got tired of waiting for the protocol 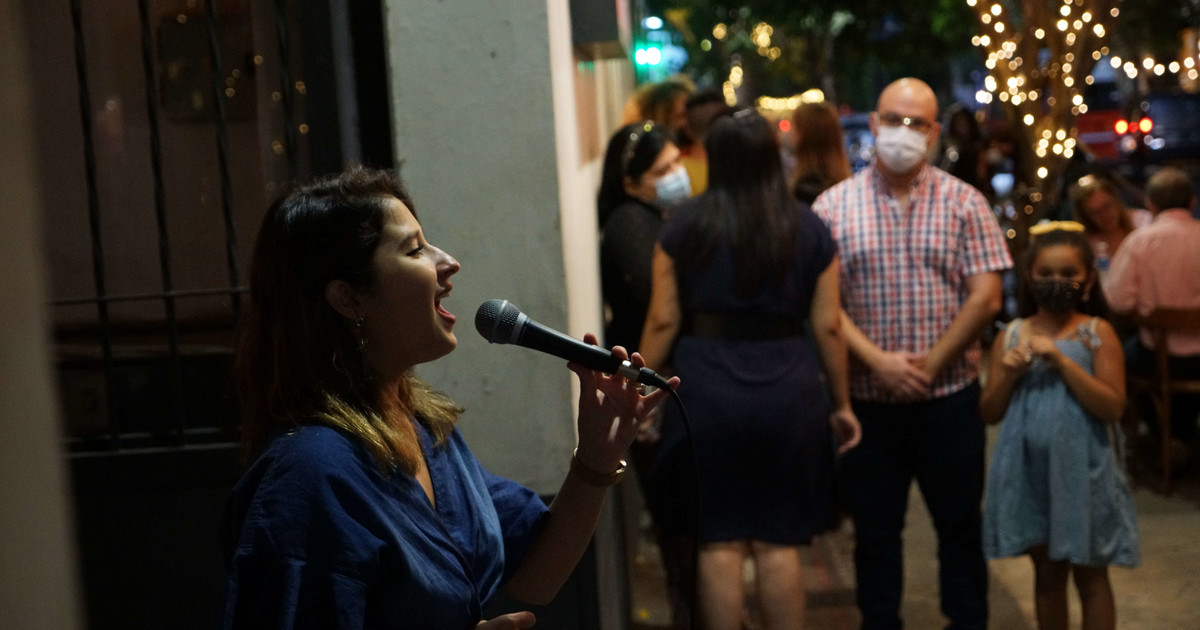 “For fear of the pandemic, I was afraid to step on the street and sang from the window. Then I stood next to the frame. In the end I saw that people respected the distance, and I went out ”. This is how the singer Laura Ávila (26) started her project “Lyric Window”, in his house Nicaragua almost Borges. A creative way to bring a sleeping Palermo Soho back to life. And to earn it herself.

But the adventure lasted just four months: a neighbor called the police, the agents asked Laura for permission, she didn’t have it. Neither could: since the pandemic started the Buenos Aires government does not grant them. It took Laura weeks of emails, of going from one office to the other, of getting tired of asking to be received.

Until the answer came: “There is no protocol, that’s why they don’t give permission”, he says he was told in an office of the Directorate of Community Competences and Workshops in Buenos Aires. This is where authorizations should be processed, even if the permission comes from another area, the Ministry of Culture of the City.

“The system is made so that you get tired of trying,” says Ávila. He moved to Buenos Aires seven years ago from his native Cali, in Colombia. Here he graduated from the career of lyrical singer in the Colon Theater, where he also worked for the choir and had solo appearances in the opera “Orfeo y Eurídice”, by the German Christoph Willibald Gluck.

Laura Avila on the sidewalk of her house. A complaint made the Police not allow him to continue with his show with the cap.

From 20 to the pandemic sang in the subway cars D. I did the complete line. Later, he began to perform at the Cosi Mi Piace pizzeria and La Hormiga restaurant, among other gastronomic venues near the squares. Serrano and Armenia, in Palermo.

One way to make ends meet, which doesn’t make up for the lack of your most personal window. On the one hand, because Laura did not get subsidies or any help here. On the other hand, because what it can do in restaurants is just a sample of everything it can give.

“In the ‘Ventana’ the show was one hour long, we did classics like ‘Ave María’ and ‘Por Ti Volaré’, themes by Andrea Bocelli, even operas like ‘La Traviata’ and ‘Orfeo y Eurídice’, with wardrobe and everything “, bill. And he highlights: “People became very fond of the project, they always write to me to ask when he will return.”

Laura sounds tired, after trying so hard. You know that in quarantine protocols were created for everything: bars, theaters, construction, theme parks, shops.

Laura Avila on the sidewalk of her house. A complaint made the Police not allow him to continue with his show with the cap.

There is even a protocol for the development of musical activities, which includes the creation, interpretation, studio recording and broadcasts via streaming, all without an audience. But musicians who work in the streetInstead, they still can’t do it on a regular basis.

From the Ministry of Culture of the City they argue that until there is no valid protocol for street artists in Buenos Aires, they cannot do much. They indicated that in October they sent it to the Headquarters of the Government of the Nation, but that it has not yet approved it.

Consulted by Clarion, sources of the national government explain that no protocol is necessary and that shows of up to 100 people, which is usually the case of those given by street artists, are authorized by each jurisdiction.

“Things can be done. Taking care of ourselves, with distance, taking all the precautions, but they can be done ”, remarks Diego Boris, president of the National Institute of Music (INAMU) and for years head of the Union of Independent Musicians (UMI).

Laura Ávila in the Palermo pizzeria where she sang until recently. Before he did a cap show on the sidewalk of his house, but since there are no protocols for street artists, he could not continue doing it. Photo: Emmanuel Fernández

To argue his point, he mentions the modification in 2018 of article 87 of the City’s Misconduct Code. “That change establishes that there is no contravention in artistic-cultural manifestations, provided they are to the hat and not with compulsory entry ”, Boris emphasizes.

But he immediately warns: “In practice, if there is no complaint, the activity is done. If there is a complaint, it is paralyzed. That is very wrong: all musical activity is important, whether it is done in the Colón or on the street ”.

It was so hard for Laura to wait, that decided to try his luck in Austria: just days ago he moved to Graz, 200 kilometers from the capital. “They take away your right to work and they don’t even give you help. But worst of all: they make you feel like a criminal, just for wanting to act ”, she had said in February, when she still didn’t know that she would go with her music elsewhere … so far away.