‘The look of a thousand yards’: the shocking expression of the soldiers after the battles of World War II 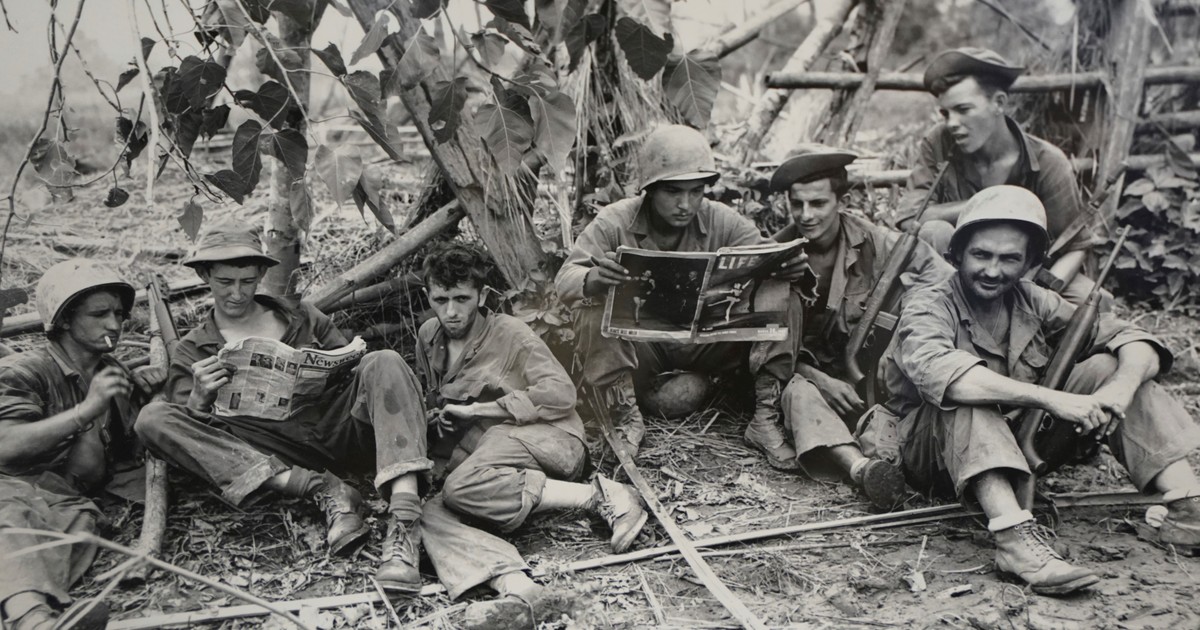 The “thousand yard gaze“ It is an expression of the soldiers after the battle. Be part of disorder from posttraumatic stress suffered by those who fought in wars and was made known to the world when the first portraits of the Second World War.

Thomas Lea (1907-1970) was commissioned to illustrate, as a draftsman and war correspondent, the experience of American soldiers on the battlefield. Sent from autumn from 1941 to places such as China, Great Britain, Italy, India, North Africa, the North Atlantic, the Middle East and the Western Pacific, among many others, he managed to put on everyone’s lips what the combatants suffered in the raw confrontations.

In his work for the famous magazine “LIFE“He illustrated various battles and decisive war events, such as the sinking of the American ship USS Wasp at the hands of the Empire of Japan. But his work transcended having been as correspondent from combat with the United States Navy during the invasion of the small island of Peleliu.

“That 2000 Yard Stare”, Thomas Lea’s most famous illustration, where the consequences of war on soldiers are observed.

The “look of a thousand yards”

There he portrayed his two best-known works of art, those that would give him worldwide credit. In this archipelago of the Eastern Pacific, the illustrator confessed after a few years that he only had to “avoid being killed and memorize what I saw and felt.” And so it was, Thomas Lea passed the survival test and then drew “The Price“(The price) and”That 2000 Yard Stare“(The gaze of the 2000 yards) making the horrors of war known to the world.

With his most famous works he perfectly portrayed the landing of the US Marines and the most controversial fight of the war in the Pacific, where 1794 soldiers died from United States. And of course, the consequences of horror.

So things, with his painting “That 2000 Yard Stare”, The illustrator represented the look downcast, distressing, empty Y dislodged of an American soldier after the war. A clear consequence of disorder from posttraumatic stress that the soldiers (of both sides) lived after the bloody combats, the few hours of sleep, the high level of tension and anguish, and the atrocities that they lived and were forced to commit in the middle of the war.

“The Price”, the illustration by Thomas Lea that recounts the battle of Peleliu between the US Marines and the Japanese soldiers.

To understand a little more about this state, Clarion spoke with the psychologist Laura Cicerone, who affirms that “the origin of post-traumatic stress disorder is the exposition to a fact very shocking, either directly, indirectly (being a witness), or being in frequent contact with information about traumatic events. “And he adds:” It is worth clarifying that by traumatic event we understand a situation or experience that exceeds the intensity of the quantum energetic or emotional that our psychic apparatus can process, when this happens a remainder remains without being able to symbolize itself “.

On the other hand, Laura confirms that “it is necessary to differentiate between post-traumatic stress, since it is in relation to a done past, and the panic attack, which is a reaction in anticipation to a future event that can be real or imagined. “He also adds:” All people do not react the same and it depends on their sensitivity. Perhaps what may be traumatic for one may not be traumatic for another, and this has to do with our childhood and our life story“.

Regarding the famous painting to which this “look” owes its name, Thomas Lea noted about the protagonist: “Left the United States 31 months ago. He was wounded in his first campaign. He suffers from tropical diseases. At night barely sleeps and in the morning he takes Japanese out of holes. Two-thirds of his company have died or are injured. They will attack again in the morning. How long can a human being endure?”. Leaving in evidence the strong psychological consequences suffered by the war.

Thanks to his famous painting, where the visible consequences on front-line combatants are revealed, the expression “thousand yard gaze“became a phrase used to describe that look puzzled Y dislodged of a soldier or military man after a long battle, typical of the aforementioned disorder.

The “look of a thousand yards”.

It should be noted that it had been known during the First World War What “Shell Shock“This is how he called the soldiers who suffered from it because of the strong explosions or because of having witnessed the horrible deaths of their comrades in the trench warfare. States of silence, deafness, general tremor, uncontrollable crying were also observed , loss of consciousness or seizures, but it was never treated adequately, as anyone who did not go to the front line was considered a coward.

Currently it is known that this symptom is typical of victims who have suffered some traumatic experience -not necessarily in a war conflict- due to the dissociation of reality caused by it. This symptom of serious distress can occur in any circumstance and place, and is not only applicable to the military context. The importance of knowing how to detect it and treat it accordingly is key for the person who suffers from it and its subsequent evolution.