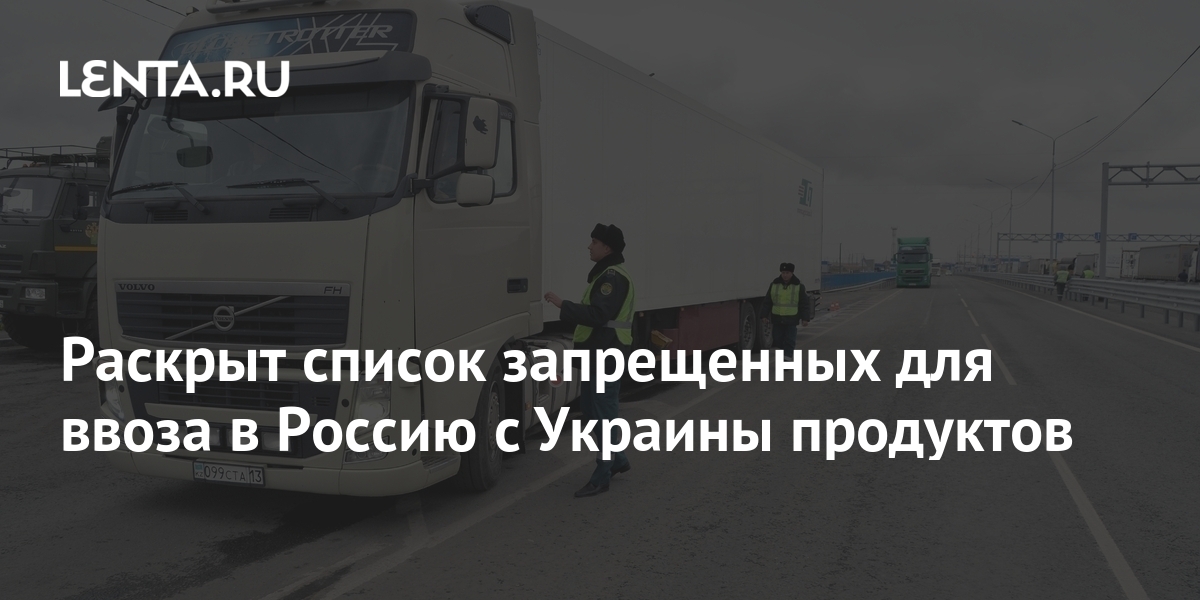 The Russian government has expanded economic sanctions against Ukraine, adding to the list of goods prohibited for import, including some food products. Their full list is disclosed in the corresponding resolution posted on the official Internetportal legal information.

Thus, the Russian government has supplemented the list of products that are prohibited from importing from Ukraine by a decree of December 29, 2018. This decision was made in accordance with the presidential decree of October 22, 2018 “On the application of special economic measures in connection with the unfriendly measures of Ukraine in relation to citizens and legal entities of the Russian Federation.”

Zelensky decided to get rid of his main competitor. How will Medvedchuk’s case change Ukrainian politics?

The new decree, which comes into force on the day of its official publication, introduces some food products into the list of prohibited for import from Ukraine to the territory of Russia, including meat products, crustaceans, shellfish, sugar, pasta, barley, tomato ketchup, mayonnaise, soups, etc. broths, sauces, mixed seasonings and flavors, cocoa paste.

In addition, a ban is introduced on the import into Russia of ice cream and some types of edible ice, mineral water, as well as soda containing sweeteners and flavoring substances, palm oil, muesli based on fried cereal flakes, livestock feed products, oilcake, enzymes, etc. enzyme preparations.

The list also includes non-food items. Now it will not be possible to import timber six centimeters thick from Ukraine into Russia, boxes and boxes, packing crates, drums and similar containers made of wood, pallets and other loading boards and wooden shells.

Mutual restrictions on the import of goods between Russia and Ukraine were introduced and then extended and extended many times after the annexation of Crimea to Russia in 2014 and because of the conflict in southeastern Ukraine. Russia has repeatedly indicated that it has nothing to do with the armed confrontation, and the annexation of Crimea took place legally, and introduced counter-sanctions, including an embargo on the import of a number of products.

Kiev at the end of March once again tightened sanctions against Russia, banning the import of wheat, rye and sunflower oil from the country. Also, the list of goods prohibited for import into Ukraine was replenished with newsprint and toilet paper, kraft paper, cosmetic napkins, hand towels, tablecloths, detergents, boxes, boxes, bags, bags, drilling tools, wheels and their parts and others.

At the same time, since February 1, Ukraine, against the background of a coal shortage, resumed the purchase of electricity from Russia. Then Acting Energy Minister Yuri Vitrenko called the deal inevitable, since the republic is still in a common energy system with Russia and Belarus. According to him, in order to avoid purchases, Ukraine must connect to Europe. Prior to that, Deputy Energy Minister Vitaly Shubin indicated that the process would take about three years.

As Deputy Prime Minister of Russia Alexander Novak stated earlier, despite political differences, the trade and economic turnover between Russia and Ukraine remains, Russian goods and services are bought by many Ukrainian state and private companies: Centrenergo, Energoatom, enterprises of businessmen Renat Akhmetov, Igor Kolomoisky. In addition, he stressed, more than three million migrants from Ukraine work in Russia.

They work, earn here and send some of the earned money to Ukraine, this is also the flow of funds, the relationship between our countries.

about Ukrainian migrants in Russia

At the same time, in February, the Deputy Minister of Economic Development, Trade and Agriculture of Ukraine, Trade Representative of Ukraine Taras Kachka said that in 2020 Ukraine had sharply reduced its economic dependence on Russia. Imports fell immediately by 35 percent, to 8.4 percent in the overall structure, while exports amounted to only 5.5 percent. However, the main trade partner of Ukraine remains the European Union, which accounts for 40.7 percent of the trade turnover.

At the same time, Rada deputy from the Opposition Platform – For Life party Vadim Rabinovich, speaking in parliament, said that Ukraine’s refusal to trade with Russia turned into a catastrophe for the country’s economy, which, in his opinion, would hit the pockets of ordinary Ukrainians.

We stopped trading with Russia and the CIS countries and lost tens of billions of dollars and did not compensate for this in any way.

from losses of Ukraine from trade with neighbors