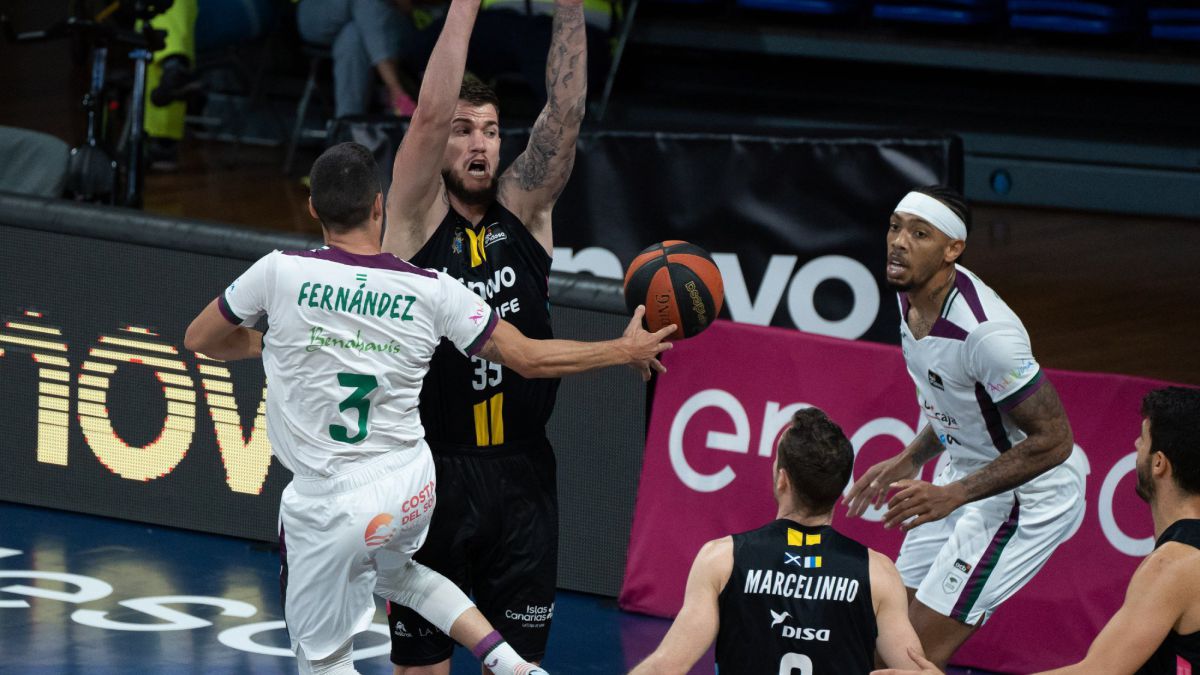 Not only was he not winning at any time, but the distance seemed to grow by the second. Nothing could do the Unicaja de Málaga, completely devoured by a delicious Lenovo Tenerife (79-61). Protected by the Shermadini lighthouse and the quality of Huertas and Fitipaldo, the hosts of Vidorreta once again offered an exhibition of choral play that led them to score, even more, their third place.

Few teams in national basketball seem to have things clearer than Lenovo Tenerife. Perhaps none. Thus, his first quarter was a beautiful symphony, pure poetry in motion, a beautiful song and a tribute to team basketball, unstoppable for Unicaja. The baton was Fitipaldo, who assisted Shermadini and hit a triple to give his team 5-0 faster than immediately. Doornekamp imitated his base, and that initial 8-0 was barely answered by a powerful tackle from Brizuela.

Lenovo did not even need the infinite presence of the Georgian giant, that when it appears it works like a wrecking ball in rival schemes. Thus, he became strong under the basket to get a 2 + 1 from Díaz that made it 13-2 and, between the basket and the subsequent free kick, forced Katsikaris to request a time-out. But Fitipaldo followed his own, four points in a row, for 9 at the moment, which was an illuminating 17-5, a distance that increased shortly after with Doornekamp’s second triple: 22-9. It seemed that the game was breaking, so Unicaja seemed to do a lot reaching the end of the first quarter losing 24-14. In the Andalusian team, almost inert, Jaime Fernández barely showed his face (8 points in the opening act).

Despite the psychological disadvantage of 10 points, the kids of Katsikaris were seen in the game, a whole world those 30 minutes that were ahead. The offensive flow decreased greatly, imposing the defenses for the first time. Another triple from Fitipaldo kept things as they were, 29-18. At that time, Jenkins was already on the court, which made his debut in the ACB, giving his team a quiet 35-25, a distance that was maintained when both teams headed for the changing rooms of the Santiago Martín pavilion: 39-29.

Lenovo Tenerife resumed the game ready to sentence him on the fast track. Shermadini, always so unstoppable, true hammer hammer, took a 2 + 1 to Thomas for 44-31, and two triples by Cavanaugh and Salin, 50-34, forced Katsikaris to call a recess. Far from reacting, the Unicaja was sinking more and more. Doornekamp made two free throws that gave his team a clarifier +20 in favor: 54-34. The partial in favor of the chicharrera formation was already 10-0, barely stopped by a triple by Alberto Díaz. In any case, the 59-43 with which this period ended left the duel practically sentenced.

Actually, the game was ‘over’, impossible to stop the Tenerife roller. The show seemed assured with the triplet duel that Huertas and Bouteille offered, two each, who kept things as they were: 65-49. The Brazilian guard began to connect with Shermadini, and when this happens his team stops being unstoppable. Thus, between the two they made a 72-49 that confirmed the beating that Unicaja was taking, already converted into a real bag of blows.

The distance became 24 points, three another triple from Fitipaldo, 75-61, pure decoration, everything that would come later by the Andalusian formation, who will have to row until the last moment to certify his presence in the playoffs. Meanwhile, Lenovo Tenerife maintains its martial rhythm, immovable in that third place, his poetry in motion. The third square has an owner.

Charles Geschke, the 'father' of PDF and founder of the Adobe company, has died

Transport A major renovation begins at Sörnäinen metro station, where you want to get rid of the “outdated, untidy and miserable” look