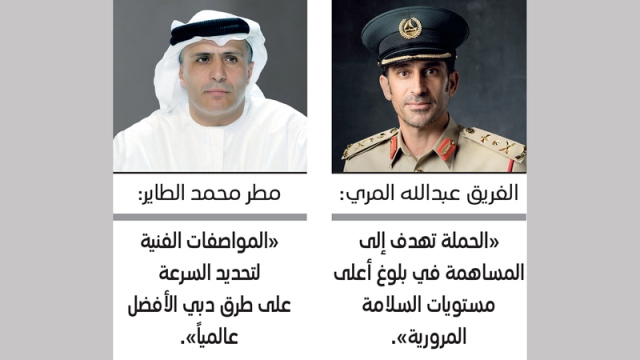 The Dubai Police General Command, in cooperation with the Roads and Transport Authority in Dubai and the Dubai Media Corporation, launched a campaign “Clear the road in the fast lane”, which will continue until May 15th, to educate community members and drivers of the importance of clearing the far left lane and using it to overtake and then return to the lane. The right-hand side, and a commitment to having an adequate safety distance separating the vehicle from other vehicles, taking into account the use of traffic lights.

He added that the campaign aims to control the security of the road, open the far left lane for cars willing to overtake, and police patrols, doctors and ambulances to enable them to reach emergency cases and save the lives of the injured and sick, and others as soon as possible.

The Director General and Chairman of the Board of Directors of the Roads and Transport Authority, Mattar Muhammad Al Tayer, stated that the authority is keen to support traffic safety in the emirate, which is characterized by a strong infrastructure of high quality in the field of roads and transportation according to the highest international specifications and standards, indicating that joint development and cooperation efforts It contributed to reducing the road accident mortality rate to the best levels in the Emirate of Dubai.

He stated that the authority has conducted studies and comparisons with the best international experiences in Germany, the United States of America and Australia on best practices to determine the uses of the fast lane and speed limits on all the emirate’s roads, adding that the technical specifications for determining the speed on Dubai roads are the best in the world.

He pointed out that the curricula in the driver training institutes contain clear and detailed lessons that emphasize keeping the left lane of the road passable and not using it except in case of overtaking.

“The campaign aims to contribute to achieving the highest levels of traffic safety.”

“Technical specifications for speed limits on Dubai’s roads are the best in the world.”