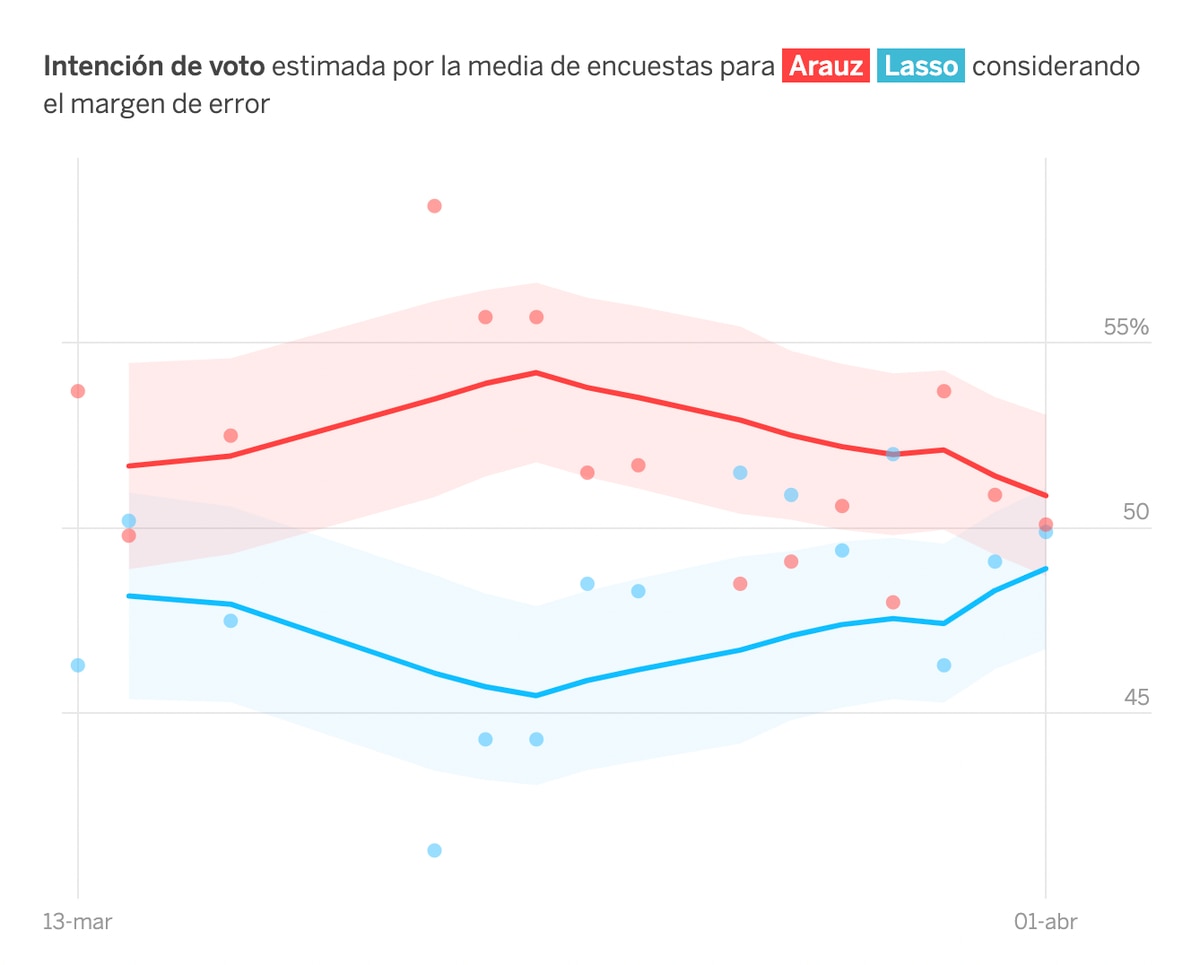 Andrés Arauz and Guillermo Lasso are practically tied at 50% in their expected votes to reach the Ecuadorian presidential seat. The right-wing candidate, who already faced Lenín Moreno in 2016 and was on the verge of being left out of this second round in a close recount, has cut distances against the leftist Arauz, who clearly won the first round.

If he maintains it during the final stretch, the young (35-year-old) economist who served as minister in the last phase of Rafael Correa’s government will return power to the left after four years of uneasy estrangement. The shadow of the former president inevitably hovers over the election. It has turned its entire platform, of which a Twitter account with more than 3.4 million followers is just a spearhead, in supporting Arauz.

The last stretch of the contest began late with a slow and spectacular count that almost left the indigenous politician Yaku Pérez as a rival of the correísmo. The surveys substantially underestimated its result, despite detecting the upward trend with which it had been growing.

It must be said that Ecuadorian law prohibits the dissemination of new polls in the ten days prior to the election, which considerably worsens the power of the forecasts. Despite this, they did approximate the levels at which Lasso and Arauz were located, engaged today in a confrontation that is as fierce as it is polarized.

These polls expected, yes, a certain last-minute rebound for Guillermo Lasso that never materialized at the polls. The average moved in the penultimate week from 20% to 22.3%, the final result being closer to the first figure. Two firms (Atlas Intel and Informe Confidencial) gave the banker 27% of the votes, something that never materialized. On this occasion, it is the renowned Cedatos, with almost half a decade of field experience, who is betting on an advantage of around 4 points for him. She is not the only one: among the batch of the last week, four out of ten expect a victory for the candidate of the CREO Movement.

The other six are betting on a triumph for Arauz, albeit by lower margins than those predicted at the beginning of the month. The narrowing of the race is a natural consequence of polarization, but at the same time Ecuadorian voters maintain considerable levels of indecision: depending on the methodology of each poll, the percentage of voters who declare themselves undecided, prone to white or null goes from 10% to 20%.

These quantities disappear from the final forecasts, as well as from the resulting mean, through a weighting exercise: indecision is assigned to side and side proportionally. This approach starts from a premise: that voters who are still undefined (or who hide their decision from the direct question of the pollster) are distributed proportionally among the candidates in the running. The method is common, with variations in weighting decisions, in Spain and elsewhere. It allows more realistic forecasts, but introduces uncertainty: what happens if the base premise is not correct; if there are more votes defined at the last minute in one of the two available addresses?

Added to all these sources of uncertainty is the quality variable of the surveys available in Ecuador. Surveys of transparent and recognized houses coexist with others of less defined origin; in some cases, they are actually real jobs, but filtered by the part that is best in the data photo. Between both extremes there are exercises with coverage of different social and territorial scope.

In an attempt to separate the wheat from the chaff, the autonomous project Electoral calculation compile, filter and rate each of the available surveys. An Ecuadorian engineer, economist and physicist start from current criteria, used technique, territorial coverage, and past successes. On this basis, they build a forecasting model based on simulations that takes into account the internal trend approximated by the different measurements of each survey house. At the close of the last survey presented, the model placed the most probable simulation at: Arauz 52.4%; Lasso 47.6%; a point very similar to the average of the surveys presented here. But the most interesting aspect of this type of model is its ability to offer a map in uncertainty; in this case, they assign a probability to each approximate margin of victory for each candidate. The result: in two out of three worlds, Arauz wins. Almost always, yes, with greater chances of a margin less than 5 points, in 1 out of 5 simulations.

But in one out of three, the victory goes to Guillermo Lasso. This is roughly the probability of victory assigned to Donald Trump by statistician Nate Silver before he won against Hillary Clinton in November 2016.

The sources of uncertainty in this election, including a new epidemic peak, guarantee a story with an ending that does not end with these data.

Sekou advances in his recovery and could shorten deadlines