The largest center for industrial innovation 4.0 in southern Europe 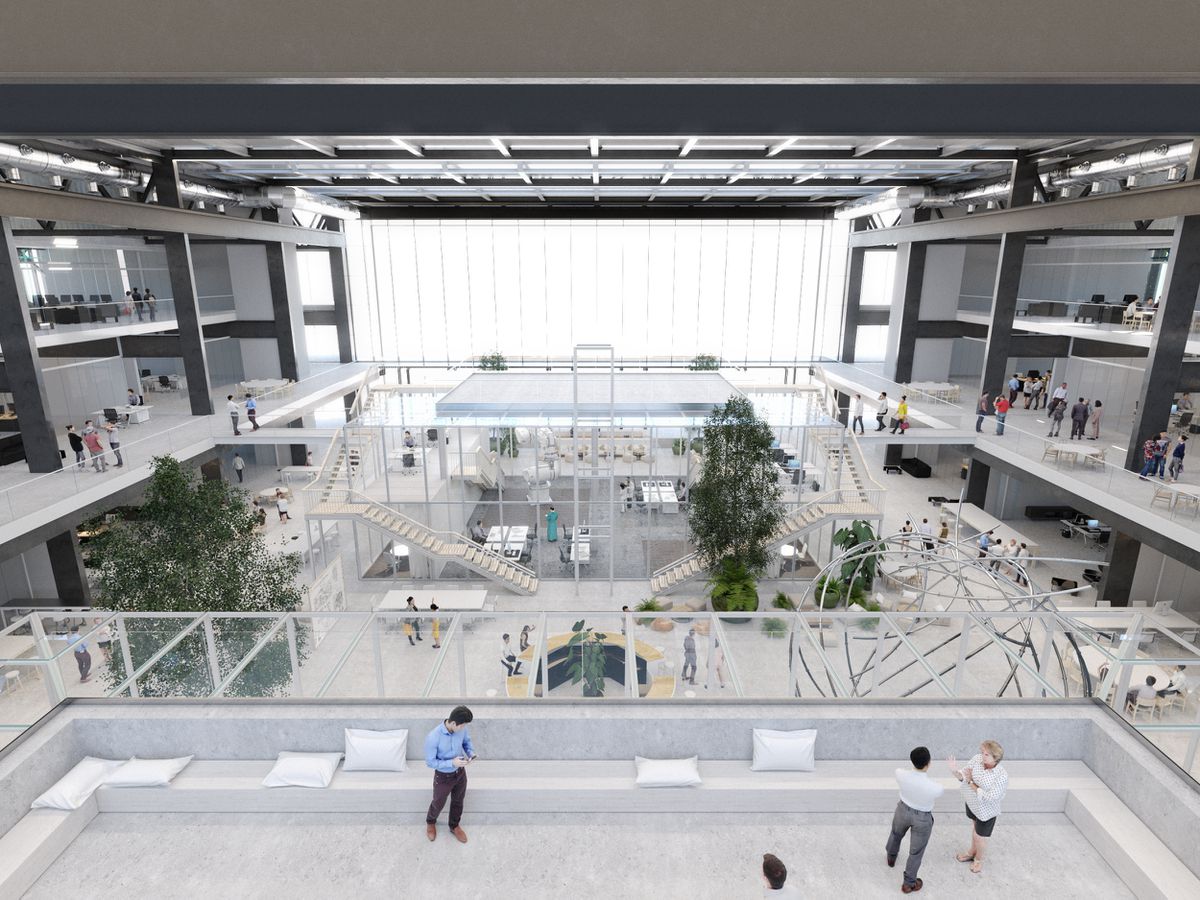 “Please take me to Carrer Lletra A in Zona Franca, 51.” This address will become a frequent destination for taxis, cabifys Y ubers from Barcelona. It has no loss. In the industrial landscape, an ultra-modern building, lined with glass and full of technology, rises like a beacon that opens at the end of the year: the first phase of DFactory BCN.

The project establishes a business attraction pole within the industrial and logistical pole of attraction that has been the Free Trade Zone for more than a century. In fact, DFactory renews that mission and projects it into the future to develop Industry 4.0 not only in Barcelona, ​​Catalonia and Spain but also in southern Europe.

The investment is channeled through the public-private company Consorci de la Zona Franca de Barcelona (CZFB), with the technological assistance of the Leitat Foundation.

Logically, a plan of this caliber is incubated long before the pandemic. But the virus arrives, accelerates digitization and rebound the relevance of DFactory. “Before, when we talked about the need to digitize, you would hear a lot ‘yes, of course, we have to’. Well, we can no longer afford ‘we will’, we are doing it now ”, says the director of the Leitat Technological Center, Joan Parra.

We are experiencing the profound transformation of the fourth industrial revolution. Catalonia, Spain and Europe not only cannot miss this opportunity, they should lead it

Pere Navarro, special delegate of the State in the CZFB

Some reports reflect that jump in urgency. HSF Research and KMPG International argue that, just before COVID-19, emerging technologies such as robotization and process automation, artificial intelligence (AI) or data analytics were important in concrete benefits: increasing revenues, reducing costs or improving the taking of decisions, for example. Barely a year and a half later they are already directly “essential for the survival of companies” in the ever shorter term.

“We are experiencing the profound transformation of the fourth industrial revolution. Catalonia, Spain and Europe not only cannot miss this opportunity, we should lead it. This is vital, in a globalized economy either we are part of the engine of change or we are going to lose many options to generate wealth ”, says Pere Navarro, special delegate of the State in the CZFB.

To this need / opportunity to have references in R&D 4.0 in Spain, Next Generation funds have suddenly joined to finance projects, provided they arrive on time.

If DFactory Barcelona was born to generate innovation 4.0, it has already achieved one: its own work model. “It has nothing to do with an incubator or a business accelerator,” explains Navarro, “we are talking about a space where innovation goes from being an idea to taking shape and generating prototypes”.

It is a center aimed at collaborative work between companies and on tangible innovation projects —they use both their own technology transferred to DFactory Barcelona and that of the services of the hub— to function as a consolidated R&D department.

This difference is crucial. Parra highlights that it is the first center with this practical approach in Spain, although it is known in the US and part of northern Europe. “Normally locating companies in incubators or incubators to use means discussing the rental of space, the price of the square meter, but in DFactory Barcelona the important thing is the activity you carry out to strengthen it as a business.”

It is a paradigm shift. The hub points to one of the greatest shortcomings in the Spanish innovation structure, the lack of industrial R&D to attract specialized companies from abroad and boost local ones. To some extent it is understandable, it requires large investments in facilities and equipment that act as a barrier to entry but are essential to develop competitive innovations.

“This R&D is precisely the one that generates the most value, trains more professionals, puts you on the map of international innovation and develops a greater ecosystem of companies and surrounding economic fabric,” adds Parra. “DFactory rejects the ‘they invent’, it is designed so that things of value happen and contribute to the GDP through the growth that today is digital, it is fast and it is so much needed in the industrial sector”.

The project tries to overcome this prohibitive investment barrier with an injection of 25 million euros in phase 1, the first building, and 100 million in total when a second headquarters is built right next door, fully assumed by the CZFB .

DFactory Barcelona rejects the ‘they invent’, it is designed so that things of value happen and contribute to the GDP through growth that is digital, it is fast and it is necessary in the industrial sector

The idea is to deploy stimuli for communication, collaboration and open innovation in situ. “We want to guarantee that this common work is as efficient as possible – emphasizes Blanca Sorigué, general director of the CZFB – and we offer to large companies, SMEs and startups services such as the implementation of research teams in company, R + D + i projects, technological feasibility studies, characterization services, prospects and technological missions, specialized training and financing consultancy ”.

The technological branches that prioritize hub They have to be the strategic ones in Industry 4.0, although they will not be the only ones as the attraction of companies advances: robotics, sensors, 3D printing, AI, cybersecurity and advanced manufacturing.

According to Sorigué, even the design of the building contributes: “It is built mainly in glass to give visibility to technologies, eliminate obstacles between companies in the ecosystem and make access to laboratories, meeting rooms and common areas open-ended. The entrances on the four sides not only represent openness to society, they also facilitate the productive and industrial aspect in the transfer of machinery ”.

How does it work

These services have not yet been officially launched but they are already approaching objectives such as the establishment of companies. The technology giant HP has an R&D center nearby, in Sant Cugat del Vallès, and is transferring part of its equipment to DFactory.

With a double objective: to enrich their innovation and take advantage of its technological marketing possibilities and prestige —the center of Sant Cugat is more difficult to visit—, “and they are also very attracted to crossing with other companies in the same physical location, they know that this opening it works because they apply it in other of their facilities around the world ”, explains Parra.

“And from there, generate a waterfall,” continues the expert. We already have companies interested in crossing innovation with HP, something key must be taken into account: industrial 4.0 technologies are very connected, there is no robotics without sensors, without 3D to manufacture spare parts or data flow management. That is why DFactory Barcelona has its own computing capacity, for trials of this management ”.

Navarro gives another example of cross-innovation: “An automobile company comes into contact with a technology firm that develops new applications based on AI, together they can produce new ways of understanding vehicle connectivity. If we create an ecosystem in which both companies work together, it will be much easier to reach that point of synergy ”.

We are facing a disruptive project, pioneer in Europe, which will allow us to act as a node for attracting investment

DFactory Barcelona partners with public administrations and business associations to project not only the message but also its practical demonstration, beyond the traditional communication in forums. How? With simulations of the digitalization process of companies so that their managers can see where they are starting from and, depending on technological evolution, where they would be in a few years, what possible advantages it would bring them and the risk of losing positions if they do not undertake it. “Without doctrine, with respect, the ultimate decision is up to each company,” concludes Parra.

The first phase already built has 17,000 square meters and when the second is finished it will deploy 72,500.

The complex has been designed with high energy performance criteria by reducing demand and efficient facilities. The architecture aligns with some Sustainable Development Goals, keeps the temperature constant inside and is partly powered by solar panels on the roof.

CZFB and Leitat launched Europe’s first 3D printing incubator in early 2019, which has already powered more than 60 companies. Although it is not an identical model, it does share characteristics and it is a valuable experience to consolidate DFactory.

It plans to generate 1,500 direct jobs and up to 5,000 indirect ones. “We are talking about a high quality and therefore stable implantation. Part of the talent will come from abroad and we will be able to attract international companies. We are facing a disruptive project, a pioneer in Europe, which will allow us to act as a node for attracting investment ”, explains Blanca Sorigué, general director of the CZFB.