The lake that froze the planet

Lake Agassiz had an area of ​​more than one and a half million square kilometers. / S. Norris

The brutal overflow of an ancient lake in Canada could be the cause of a glacial period 12,000 years ago, according to the CSIC

An international study with the participation of the Higher Council for Scientific Research (CSIC) determines that the ancient lake of glacial origin Agassiz, which extended 12,000 years ago in Canada, overflowed and caused a flood, emptying at a speed of 800 Olympic swimming pools per second . The work, which is published in the journal ‘Geophysical Research Lettersg’, suggests that this could be the cause of a glacial period that lasted more than a millennium.

With an area of ​​more than one and a half million square kilometers, Lake Agassiz was located in the west of the country, in what is now the southern provinces of Manitoba and Saskatchewan, near the border with Alberta. The lake was formed as the Laurentino Ice Cap, about two miles thick and spanning much of North America, began to melt about 16,000 years ago. The existence of a natural dam prevented the waters coming from this fusion from reaching the Hudson Bay, which caused the water to accumulate.

The water discharge was ten times the average flow of the Amazon River, one of the largest known floods

Geomorphological evidence found in northern Alberta also suggests that, at a certain point, the lake’s waters began to flow northwest through a channel known as Clearwater-Athabaska, in the Mackenzie River basin in its road to the arctic ocean. “We know that a large flow of water passed through the canal, the volume and magnitude of which we did not know,” explains Sophie Norris, who is currently a researcher at Dalhousie University (Halifax, Canada).

According to calculations, the water discharge reached, at its peak, a volume of about two million cubic meters per second. This volume is approximately ten times the average flow of the Amazon River and would represent one of the largest known floods. The work shows that in less than nine months about 21,000 cubic kilometers of water were discharged, a figure similar to the mass of water contained in the current Great Lakes between the United States and Canada, considered the largest group of freshwater lakes in the world. . 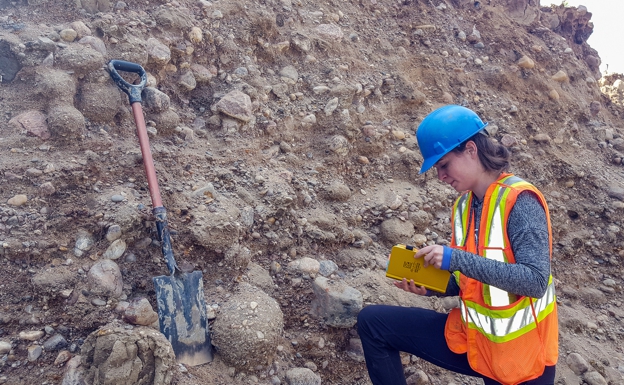 Sedimentary deposits generated by the flow of water that caused the emptying of Lake Agassiz. /

If these results are confirmed, says Daniel García-Castellanos, a scientist from Geosciences Barcelona (GEO3BCN-CSIC), it would be the largest flood ever recorded that has caused a lake to overflow. “We are close to understanding these very abrupt erosion and flood events and to understanding their quantitative role in the evolution of the land relief and its long-term erosion,” adds the researcher.

In addition, this flood could explain one of the greatest mysteries of the recent climatic evolution of the Earth. “About 12,900 years ago, in just a few decades, a large part of the planet suffered a sudden cooling that, in Greenland, for example, is estimated at up to 10 degrees and lasted more than a millennium”, García-Castellanos details. This period is known as Younger Dryas, which gave way to the present time, the Holocene.

Debate among the experts

According to the GEO3BCN-CSIC researcher, «the causes of this phenomenon will continue to be highly debated among paleoclimatologists and geomorphologists, but our results suggest that the enormous flow of water from the flood could trigger the climate change of the Younger Dryas by modifying the Ocean currents”. “However, the ages of the flood deposits are not sufficiently precise yet to establish that the flood occurred exactly at the beginning of this cold period,” explains García-Castellanos.

“We do not know well if this flood caused the Earth to return to the ice age, but our model shows that, as so much water reached the Arctic Ocean, there was a cooling of the climate of the northern hemisphere”, says Sophie Norris, principal author of this study.

To carry out this research, the research team first analyzed the sediments washed away by the flood and made more than a hundred geological cuts of the valley to calculate the size of the necessary water flows and thus explain the height at which they are they deposited those sediments. Specifically, García-Castellanos was in charge of relating the discharge of water that involved the flooding with the resistance of the rock in the area where the lake overflowed.

In addition, a mathematical model was used to simulate the gradual erosion process of the levee that took into account the erodibility of the rocks in the area and the size of the lake necessary for the waters to end up pouring into the upper part of the Clearwater River. “The result is very motivating because it confirms the validity of this technique, which can be applied to other similar floods that modified the terrestrial landscape after the last glacial period”, underlines the GEO3BCN-CSIC researcher.

“The Canadian province of Alberta owes this flood part of its current wealth of resources,” says researcher Sophie Norris

“What I find deeply satisfying is modern hydraulic modeling which, when applied based on evidence preserved in today’s landscape, shows us a phenomenal flood that occurred around 12,000 years ago,” says Paul Carling, study co-author and researcher at the University of Southampton (UK). “Once all the uncertainties have been taken into account, the results obtained are robust,” adds Carling.

According to Sophie Norris, Alberta owes part of its current wealth of resources to this flood. “The oil sands region must be located along the channel that was formed during this flood. These are covered with a large amount of sediment from the Quaternary, and thanks to the flood they were exposed, “concludes the researcher. Schoolchildren in Corona quarantine: Mother writes a letter to the Minister of Education

“Knowledge” allows to raise the capacity of school buses to 100%