“The King” preserves the “Summit of Champions” with “the fourth point” 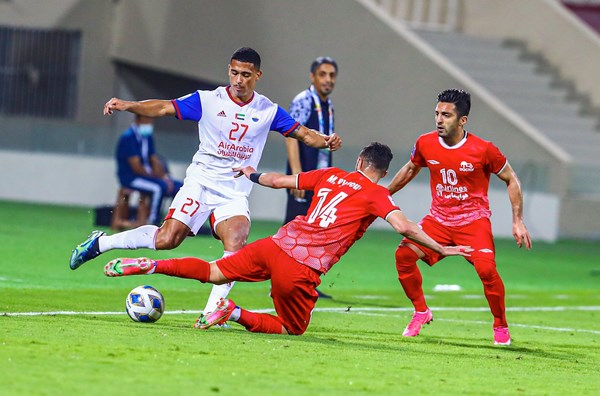 Sharjah maintained its lead in the second group, in the AFC Champions League, after a 0-0 draw with the Iranian Tractor, today «Saturday», in the second round, to raise the «King» his score to 4 points, while Tractor reached two points, equally to Pakhtakor of Uzbekistan Which also tied with the Iraqi air force, in the same round, in exchange for a “point” for the air force.

The match was strong, and many opportunities were provided for the two teams, and in the first minute Khaled Bawazir wasted a sure chance to score from Luan Pereira’s cross. The “king” relied from the start on pressure and attack from the parties, and Caio wasted alone from Shukorov’s pass in the 40th minute.

The beginning of the second half was marked by calmness from Sharjah, who tried to control the ball, and some opportunities were available to Salem Saleh and Pereira, to no avail, and in the 58th minute, Adel Al Hosani shines in tackling Mahdi Tikari’s ball, and Sharjah will play the next match with Pakhtakor on Tuesday.

On the other hand, Al-Wehdah tied with Goa Al Hindi without goals at Pandit Jawaharlal Nehru Stadium, in the second round of Group E competitions, so that “Annabi” scored the first point, while Goa raised his score to two points, while Biruzi tops the group standings with 6 points after They beat Al Rayyan of Qatar 3-1, and Al Rayyan have one point in last place.

Mohammed bin Rashid: The world is recovering through Expo 2020

Crimes The Oulu 2017 fire bottle strike was, by law, a racist crime