The judge, about Gimeno: “He killed the girls in a premeditated way and to cause inhuman pain to the mother” 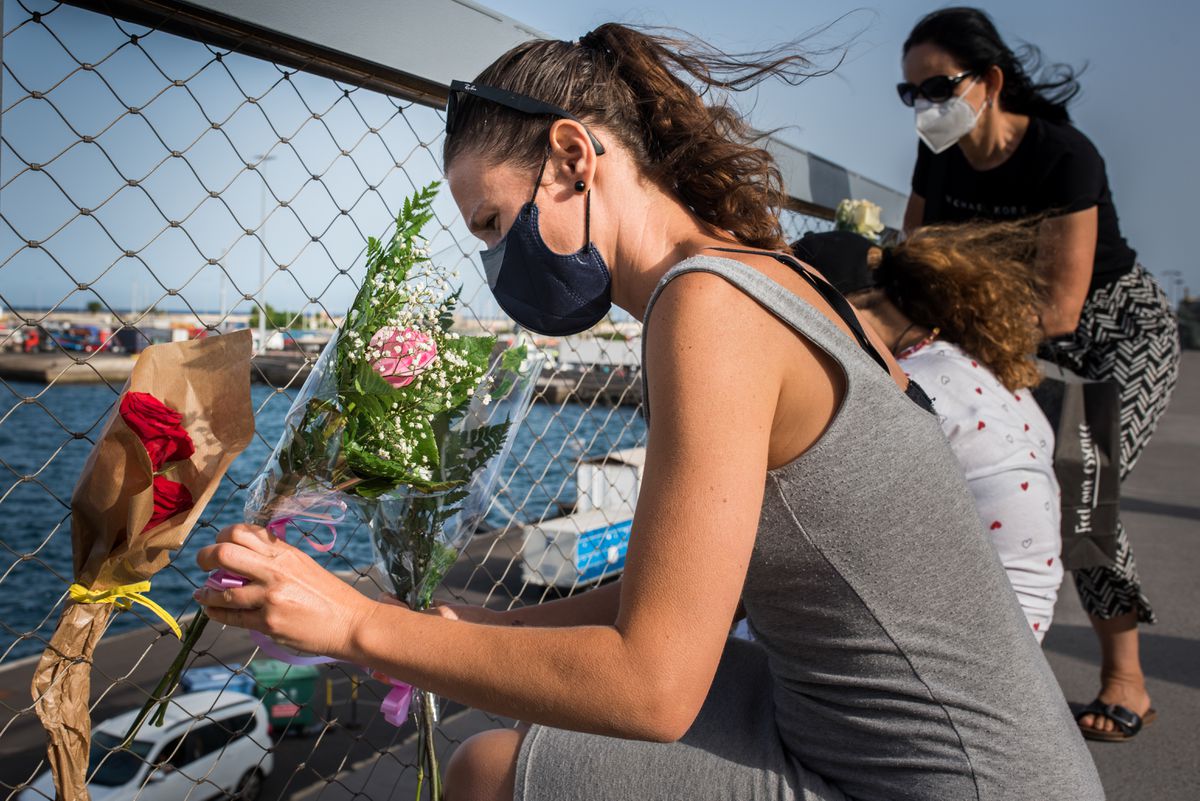 The Civil Guard intercepted Tomás Gimeno, the father of the girls Anna and Olivia, at 11:15 p.m. on April 27 at the entrance to the port of Santa Cruz de Tenerife. At that time, the girls were already dead. Gimeno threw them into the sea at 10:30 p.m., wrapped in towels and each one in a sports bag tied to an anchor, according to the judicial order made public this Saturday. The girls’ father, after running out of battery at sea, decided to return to port. There, at the entrance, a Civil Guard boat intercepted him for breaching the curfew, which then began at 10 at night. The Civil Guard ordered him to dock his ship at jetty A of the port. Once there, and after showing them his documentation, he told them that he would sleep on the boat. The Civil Guard resumed its journey north. Gimeno went to buy a mobile phone charger and, at 12:27, set sail for the last time.

The car maintains that Tomás Gimeno killed his daughters between 7:47 p.m. and 9:00 p.m., at his home, in the town of Igueste de Candelaria. Later, with them dead in his car, a white Audi A3, he went to his parents’ house, in Santa Cruz de Tenerife, to leave certain personal effects. From there, he headed for the port. The magistrate believes that the defendant’s plan was to “cause his ex-partner the greatest pain he could imagine, by deliberately placing her in uncertainty about the fate or fate Olivia and Anna had suffered at his hands.”

The justice has decided to lift the secrecy of the summary after the discovery of the body of Olivia, the eldest of the sisters and has annulled the international order that issued for the arrest of Tomás Gimeno for a crime of child abduction. Instead, it has agreed to issue another international order for the alleged commission of two aggravated crimes of homicide and one against moral integrity in the field of gender violence. The judge has also declared the loss of jurisdiction in the case in favor of the court of violence against women in Santa Cruz de Tenerife, where the girls’ mother’s home is located.

The judicial order explains in detail the events carried out by Tomás Gimeno, who from the moment of the separation maintained towards Beatriz Zimmermann “humiliating and degrading treatment, directing her daily disqualifying, offensive and outrageous comments, in particular focused on belittling her for having he remade his life with a new partner ”. Gimeno also repeatedly stated that he did not tolerate Zimmermann’s new partner “sharing moments with their daughters.”

The car points out that “it never had the intention of taking the girls from their mother to take them to an unfamiliar environment.” Instead, “but presumably kill them in a planned and premeditated manner.” His goal: “to cause inhuman pain to your partner.” For this reason, the intention of the girls’ father was to leave Beatriz Zimmermann in the “uncertainty about the fate” of Anna and Olivia “by hiding their bodies, killing them at the bottom of the sea”, choosing “places far from the coast and deep, where I thought they would never be found ”.

Report of the facts

The account of the events carried out by Tomás Gimeno on the day of the disappearance shows a plan conceived in advance. The night before, the disappeared man had gone to the family farm where he worked in Guaza (in the tourist town of Arona, south of the island) to leave another of his cars, a black Alfa Romeo Guilia, covered with a cover. On April 27, the ex-partner agreed that Gimeno would pick up the girls at five in the afternoon and return them at nine at night. That day, the first thing he did was pick up one-year-old Anna from Beatriz Zimmermann’s house, in the Radazul locality (municipality of El Rosario), which is located a few kilometers from the farm where Gimeno ended the girls life.

With Anna sitting in the Maxi Cosi located in the front seat of the Audi A3, Gimeno went to the Die Villa educational center, in the municipality of El Rosario, where Olivia went on Tuesdays and Thursdays from 1:00 p.m. to 5:00 p.m.

The director of this center is the current partner of the girls’ father. At that moment, Gimeno took the opportunity to give him a pencil case with packing tape, and asked him to call him at 11:00 p.m. that day. “Despite this,” says the car, “he opened the box at 5:20 p.m., finding inside a wad of money for the amount of 6,200 euros and a letter saying goodbye to her.”

Tomás, Anna and Olivia headed towards the house of Gimeno’s parents. The youngest stayed there, while her father took Olivia to tennis lessons until 6:30 p.m.

The girls’ father took advantage of his loneliness to go for the first time that day to the marina where his pleasure boat was moored, Esquilon, six meters in length. There he put the engine in the water “and started it as a test.” At 5:56 p.m. he left the port facilities and returned to his parents’ house. He was there until 7:26 p.m. It would be the last time Anna and Olivia were seen alive.

The moment of the murder

The car arrived at the farm in Igueste de Candelaria at 7:47 p.m. Three minutes later, Olivia sends a voice message to her mother in which she tells her that her ex-partner asks her to go to his home to look for some paintings at 9:00 p.m. and to put the car inside.

Gimeno killed his daughters between 7:47 p.m. and 9:00 p.m. The order does not reveal the causes of the deaths, but it does maintain that at least Olivia died “from a violent death, with a medico-legal etiology compatible with homicide.” After killing them, he wrapped them in towels, put them in garbage bags and then in sports bags. The preliminary report of the autopsy provided by the Superior Court of Justice of the Canary Islands has revealed this Saturday that the eldest of the sisters died of acute lung edema.

A pulmonary edema can be caused by a malfunction of the heart or by non-cardiogenic causes, as would be the case with Olivia. Here, the reasons can be varied, such as an inhalation of water that causes the accumulation of fluid in the lungs, suffocation or the inhalation of smoke. Another cause can be an adverse reaction to a drug or an overdose, according to medical sources.

Gimeno leaves the farm at 9:05 p.m. in his Audi A3. Inside it “presumably were the lifeless bodies of his daughters,” says the car. Drive back to the capital, Santa Cruz de Tenerife, just under 20 kilometers away. He stops at 21.13 at his parents’ house. In it, he sneaks his dog Oto, two credit cards with your keys and two sets of Alfa Romeo keys.

Meanwhile, Beatriz Zimmermann had arrived after 9:00 p.m. at the Candelaria farm, where Tomás Gimeno lived. He did not park the car inside, as his ex-partner requested, but walked inside. He picked up the paintings and phoned Gimeno. In this conversation, he lies to her and tells her that “they were going to eat something and that he would leave Anna at her home in Radazul”.

It was 21:27 when Gimeno returned to the Marina de Santa Cruz marina. He parked in front of Dock A, where the square of his boat is. He made three trips from the Audi to the ship with different objects, including the sports bags inside which, “presumably”, were the bodies of his daughters. At 9:40 p.m. he set sail.

Beatriz Zimmermann, already in a state of nerves, called him again at 9:51 p.m. In this conversation, his ex-partner tells him that “he was already off the island with the girls.” In the next call, at 9:59 p.m., he reiterated that “I was not going to see him or the girls anymore.” At 10:30 p.m. and 10:40 p.m. Zimmermann called him again, already from the Civil Guard Post where he filed the complaint. In one of these calls, Tomás Gimeno even spoke with an agent of the armed corps.

While talking on the phone, the girls’ father was completing his tragic plan. Around 10:30 p.m., “over an area that he knew deeply,” Gimeno threw his daughters into the sea in two sports bags tied to an anchor by means of a chain and a rope. 14 minutes after this macabre operation, the missing person’s cell phone runs out of battery and he decides to return to port.

Back in the port

On his return, Gimeno meets with the Civil Guard, who propose a sanction for skipping the curfew: When the agents have set sail, and after telling them that he would sleep on his boat, Tomás Gimeno asks the watchman if he can lend him a charger of mobile. His terminal is not compatible with his terminal, so he is forced to buy another at a nearby gas station, in addition to a box of cigarettes and a bottle of water. At 11:58 p.m. he returned to the Navy, parked in the same spot and went to the security guard’s cabin to charge his mobile. He waited aboard his boat until 12.13. At that time he picked up his device, checked his car and at 12:27 am he set sail for the last time.

Tomás Gimeno’s intense use of his mobile for the next hour and 40 minutes explains his interest in getting a charger. He turned it back on at 12:41. He spoke with his girlfriend and his ex around 1.30; He sent messages to friends around two in the morning to tell them that he was leaving “several of his belongings, including his motorcycle”; and another message to his father, in which he said “that I was really sorry, that I was sorry for him, but that he needed this and that he will finally be fine and how he wanted.” Beatriz and Tomás spoke for the last time at 2.11. The mobile stopped connecting at 2.28.

The next day, at 5:37 p.m., Gimeno’s boat, Esquilon It was found adrift at the height of Puertito de Güimar, about eight kilometers to the south in a straight line. During the towing, a Maxi Cosi was found floating in the sea. Last Thursday, June 10, after 44 days of searching, the oceanographic vessel Ángeles Alvariño found Olivia’s lifeless body. Anna’s still can’t be found.

Breakdown on the ship

The Oceanographic Vessel Angeles Alvariño, In charge of the search for the body of little Anna Gimeno Zimmermann at the bottom of the sea coast of Tenerife, he had to return to port this Saturday due to an equipment breakdown, according to sources from the Civil Guard. This is the first time that he has done so since the daughters Anna and Olivia and Tomás Gimeno arrived in Tenerife from Vigo on May 30 to participate in the search.

The tracking had been underway for more than a month when the ship of the Spanish Institute of Oceanography, generally dedicated to scientific research, was incorporated. It is equipped with an echo sounder that works by sending acoustic waves to the seabed and calculates the distance it takes to return, which allows it to make maps up to 3,000 meters deep.

Once something is found, it is the robot’s turn Liropus 2000. This underwater apparatus is gifted with a powerful lighting system, high-performance cameras, two precision hydraulic manipulator arms, a suction system for liquid and gaseous samples and is valued at 1.5 million euros. The robot was in charge of raising two sports bags tied to the anchor of the pleasure boat from a depth of 1,000 meters. In one was Olivia’s body. The other was open and empty. Investigators suspect that little Anna was in it.