The journey is the device 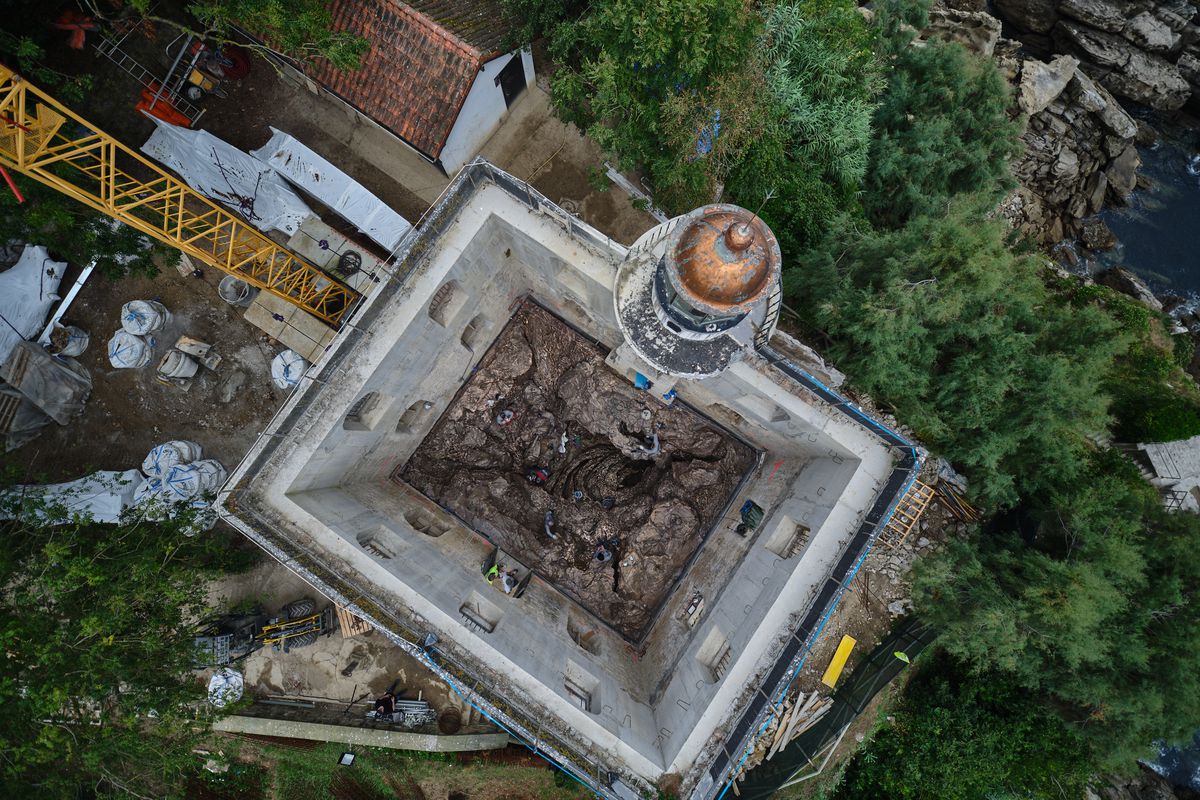 Hondalea (“Sea abyss”) is a bronze harp, the hole through which the humpback whale breathes. Also a reminder that a few thousand years ago the sea level was 120 meters below where it is now. The very idea of ​​slipping and falling into it causes nightmares. Still, its sea of ​​foam and rocky vegetation take on familiar shapes that we want to decipher and understand.

The chasm that guards the lighthouse house, on the island of Santa Clara de San Sebastián, seems to have an infinite depth despite its few meters high. Due to its enormous size and its complicated location, the only way to contemplate it is to travel towards it and inhabit it, like someone who inhabits the space of their own body. There is no absolute nucleus, because although there is an ultimate destination – a grotto made with tons of bronze on top of an island that formerly served as a place of confinement and healing – we cannot occupy space, only surround it and imagine its degree of disruption, since it maintains a physical distance with the pieces, more unequivocal, of the three patriarchs of Basque sculpture: Comb of the wind, by Eduardo Chillida; bird of peace, by Néstor Basterretxea, and Empty buildingby Jorge Oteiza. In fact, only when we leave the interior space and look out over the bay can we have an idea of ​​the complete piece. This eccentric situation is also that of our fantasies in relation to the work, which is actually a succession of moments through space and time.

Equally, Hondalea it is, in itself, a debate about sculpture in our time, about the true nature of a work in a specific place and how it is —or should be — the experience it provokes. It is not a question of now posing a normative critique of the new formats available to every artist, most of them “species of spaces” adapted to the very varied and profitable forms of spectacularization, but rather of trying to define the specific media and the conditions — each time more social – creating new meanings.

A first opinion, the most classic possible since Gotthold Lessing, is that sculpture is a volume that affects a spatial extension, although, he adds, “the work also exists in time.” Starting from modern sculpture, the issue forces us to talk more about the perception of the viewer: the work has a formal and psychological duration, it can change according to the light, the climate, the erosion, its relational character. There where rest and movement converge is the “piece”, whether the artist wants to order hardened waves of lead (Richard Serra) or if he wants us to occupy it in its recurrent off-centering (the earthworks by Robert Smithson) or we shape it ourselves as a “passage” (Dani Karavan, in memoriam).

We are fed up with the resource of the “specific site”, lately it seems that any intervention or monument beyond the white cubicle should be a if you, a word that not even global warming will be able to strike down. They have changed the climate. The trees dry up and do not bear fruit, the mosquitoes disappear, the hunters do not know that they are killing the last specimens. The sixth mass extinction is coming and the last good forecasts still do not come from the scientists, but from the artists who invade the streets and parks with their condemned sites. Geologists alert us to the acidification of the oceans, but nobody warns of the degree of acidity of the countless human figures that pollute everyone’s space.

Not so the liquid sculptures of Cristina Iglesias –Submerged rooms, 2010 (Sea of ​​Cortez); Three waters, 2014 (Toledo); Forgotten Streams, 2017 (London); Inner Landscape (the Lithosphere, the Roots, the Water), 2020 (Houston), to cite the recent ones—, which share a similar vocabulary of vegetal forms modeled in bronze, rooms, lattices that weave stories, coppers, alabaster and mirrors. They are not monuments, since they lack rhetoric, idealism, they can obstruct a certain place, they make it uncomfortable, they are a body that hides behind its material surface a fascinating or sinister interior, a disturbing fairy tale. And certainly, like a painting, an analogy is produced in front of them between the artist’s emotions and the illusionistic interior of the painting.

This is precisely what causes the lighthouse house (contrary to what they tell us, the house is never a safe place), where the artist from San Sebastian leaves every mark of the geological landscape on what looks like a canvas, turned into an underground abyss. The viewer walks on it through a catwalk, listens to the water currents in monastic silence (the alabaster covers of the windows intensify this seclusion). There is no timelessness, no ultimate nature.

There is a middle ground between the sculpture for the site and the replicated forms, and that place is in time. The journey is the device, and the sculpture is present at every moment, from the moment the visitor takes the boat to the island and then a path leads him to the building where the piece is, with the ebbs and flows “working” regardless of the tensions. real or psychological that may be abroad.

The rest remains in the infinity of the horizon, between the water and the sky. Towards there, meanwhile, he points to the lighthouse.