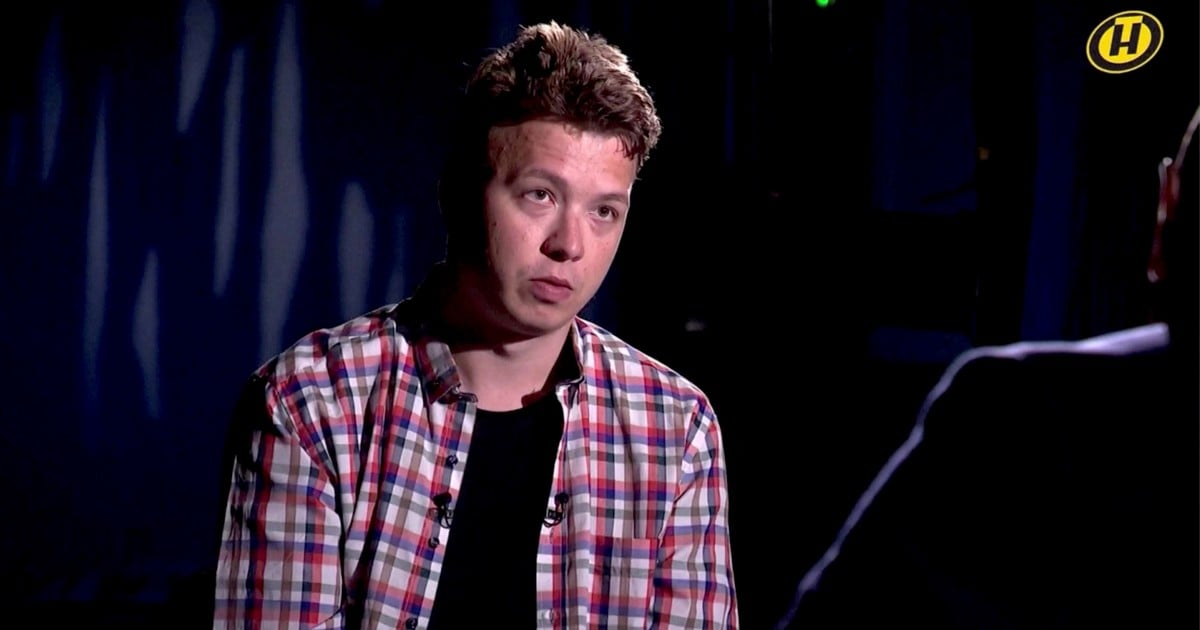 After being detained just over two weeks ago by the Belarusian authorities in an episode worthy of a spy movie, opposition journalist Roman Protasevich appeared on Belarusian state television to confess that indeed he had tried to overthrow President Alexander Lukashenko.

With tears in his eyes and visible marks on his wrists, the 26-year-old Protasevich stated that he was appearing of his own accord, and that while he had criticized Lukashenko severely, he had come to understand that the president “I was doing the right thing, and that I respected him“.

At the end of the interview, the journalist burst into tears and stated that someday she hoped she could get married and have children. For the journalist’s family, who followed the interview on television, it was clear that the The man’s presentation was far from spontaneous.

At one point in the interview, journalist Roman Protasevich burst into tears. Photo: REUTER

The journalist’s father, who spoke after the broadcast of the program where Protasevich appeared, assured that he knows his son “very well” and believes “that I would never say such things, they bowed him down and forced him to say what was necessary. “

“No one should believe these words because they were extracted through abuse and torture of my son,” added the father, in statements reproduced by the BBC.

The opposition leader Svetlana Tikhanovskaya also spoke of a “conditional” interview. For its part, the human rights organization Human Rights Watch (HRW) declared that the video was “evidence of the brutality of the police forces.”

German Chancellor Angela Merkel’s spokesperson also addressed the issue, assuring that the interview with Protasevic on Belarusian state television is “a disgrace” for Minsk.

A protest calling for the release of Protasevich in Poland. Photo: REUTERS

Recall that Protasevich, who was detained after the plane in which he was bound for Lithuania was forced to make a forced landing, had been placed on a list drawn up by the government of “individuals involved in terrorist activities” after the protests in August. passed by Lukashenko’s victory in a election that was widely described as fraud.

The regime responded with mass arrests. Opposition leaders were jailed or fled the country. Peaceful militants and journalists saw how they were sentenced to long prison terms..

Protasevich is the co-founder and former editor of the NEXTA channel on the social media platform Telegram, a medium that had become a channel for Lukashenko’s opponents to share information and organize anti-government demonstrations.

The journalist had fled the country in 2019, fearing arrest.

However, he continued to protest against the Lukashenko regime while living in exile in Lithuania, to the point that he was accused of inciting public disorder and social hatred.

As a teenager, Protasevich was already a dissident, drawing scrutiny from law enforcement. He was expelled from a prestigious school for pparticipate in a protest rally in 2011.