Each unit of this limited edition, 220 hp, has been meticulously studied and manufactured, exactly replicating the specifications of the race car that won Le Mans in 1953

Jaguar Classic has revealed
a very limited edition of new C-Type replicas to commemorate the iconic model’s automotive legacy on the 70th anniversary of its victory at the 24 Hours of Le Mans. The replicas of the C-Type will be hand-built at the Jaguar Classic Works facility in Coventry and will emulate the specifications of the 1953 racing C-Type. The original model dominated that year’s edition at the 24 Hours of Le Mans and achieved the second victory for the C-Types in this competition, thus continuing the company’s automotive success story.

Before designing the replicas of the C-Type it was necessary
delve into the history and legacy of the model to determine how it should be manufactured, what its specification would be, and how to reproduce your skills in competitions. It took almost two years to compile data before manufacturing work could begin. During that stage began what could be called a scavenger hunt through Jaguar archives, sketches, documents and photos to find out how this iconic vehicle could be made in the 21st century.

In addition to using all available original sketches and reviewing parts from that era, the team needed to consult the original engineering book. To do this, typists were hired to digitize all the content. The original book contained more than 2,000 items for Jaguar’s current team of highly-skilled engineers to review.

Fortunately, Norman Dewis (1920-2019), a British Order officer and former Jaguar test pilot and engineer, provided invaluable assistance during the manufacturing process. The team also had access to a C-Type model and photos, as well as Malcolm Sayer’s notes on the sleek bodywork. All of it
allowed to make a Car Zero. The result of the entire documentation process led to the manufacture of a model using computer-aided 3D design. It is the first time that a full replica of the Jaguar Classic has been created using this procedure. The first step was the design of the main body elements and the overall structure to provide a visual basis for the engineers and to ensure that everything corresponded to the original information available. Malcolm Sayer’s original designs could be confirmed thanks to the use of this modern methodology. Jaguar’s cutting-edge tools have helped validate the authenticity and ingenuity of the original C-Type. 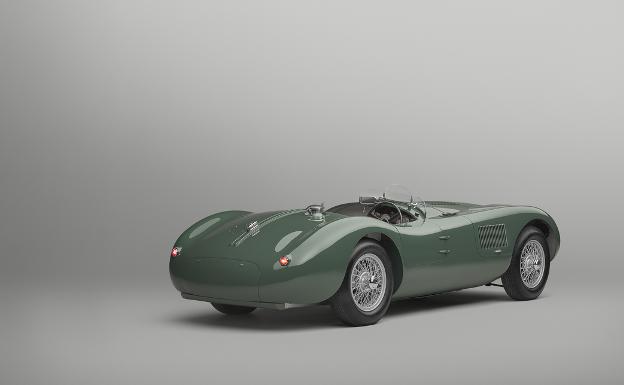 All will follow the specification of the 1953 Le Mans race team vehicle, including the 3.4-liter inline six-cylinder engine with triple Weber 40DCO3 carburettors, which
allow to reach 220 hp, and the revolutionary brake discs that were instrumental in winning the 1953 24 Hours of Le Mans and breaking the record. Each of the 3.4-liter inline six-cylinder engines requires a build time of nine months; In them, Weber carburettors have been meticulously refurbished to meet the most stringent requirements. Other details in the engine compartment have remained the same as in the original model, such as the Plessey hydraulic pump located in the gearbox, which injects hydraulic fluid into the brakes.

The original specification gauges and watches reflect the hours of craftsmanship that went into creating the C-Type replicas. Not only are they true to the originals, but they are so masterfully integrated between the switches that they represent a clear example of the delicate attention to detail of the Jaguar Classic engineers to design the perfect model.

The boot switch on the C-Type replicas also reflects this approach. This vehicle part has been redesigned so precisely that it mimics the original starting process while using the highest quality and most reliable components to ensure proper operation every time. The task of reproducing the tachometer in front of the driver, including the way it counts revolutions counterclockwise, has also been carried out with an emphasis on authenticity and originality. 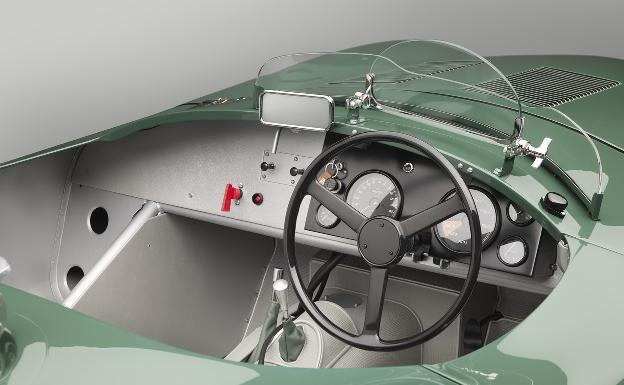 The materials chosen for the interiors of the C-Type replicas respect and emulate the legacy of the original vehicle. Old and new blend naturally and wisely to ensure authenticity and provide homeowners with a high-quality, reliable finish. The cabin has been used a trimmed hardura felt finish different from the original C-Type, but finished in silver to reflect the spirit of the original component. The Rexine leather trim on the dashboard and side panels is made from the latest roll of that material. This type of finish, used 70 years ago, gives the vehicle the most authentic appearance possible.