The Islamic Society of Sharjah launches the 21st session 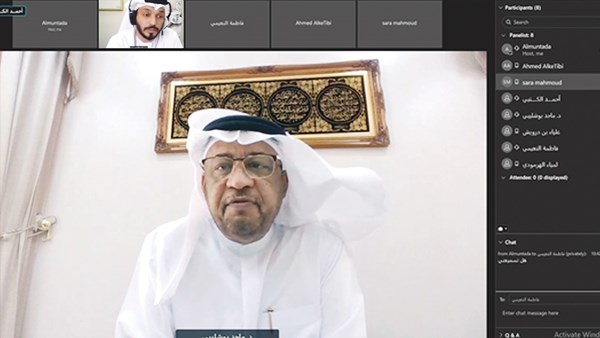 Yesterday morning, the Islamic Forum in Sharjah organized a virtual press conference to discuss the details of the scientific session in its twenty-first edition, which is organized by the forum during the period from June 26 to July 8 next, and is held for the first time virtually under the slogan “The Best Stories”.
Dr. Majid Bushalibi, Secretary-General of the Islamic Forum, stressed that Sharjah, with a clear cultural vision of His Highness Sheikh Dr. Sultan bin Muhammad Al Qasimi, Supreme Council Member and Ruler of Sharjah, occupies a prominent global cultural position, and for its blessed efforts to preserve cultural diversity in general, and to sponsor Islamic culture in particular, bear fruitful results. Every once in a while, to become a destination for scholars and scholars in various sciences and human knowledge, and the Islamic Forum leads the scene of Islamic cultural work in the Emirate, devoting to it a large series of diverse cultural programs specialized in enriching scientific and academic topics, which it implements according to a purposeful agenda to enhance the position of the Emirate and achieve the wise vision of His Highness on year round.
He explained that the forum had taken the lead in its experience in promoting cultural work through virtual reality, as it contributed in the past year to providing more than twenty thousand hours of viewing, to about 300 specialized and general articles in Islamic cultural affairs, and presented 58 publications in the field of scientific publishing for seminars and scientific journals. academically.
Dr. Bushlebi reviewed the program of the scientific course that will be held over two weeks via virtual broadcasting platforms, and the program includes six scientific themes.
It is noteworthy that the scientific session is held for 12 days after the afternoon prayer, and continues with its last lesson after the evening prayer.