The invention of numbers 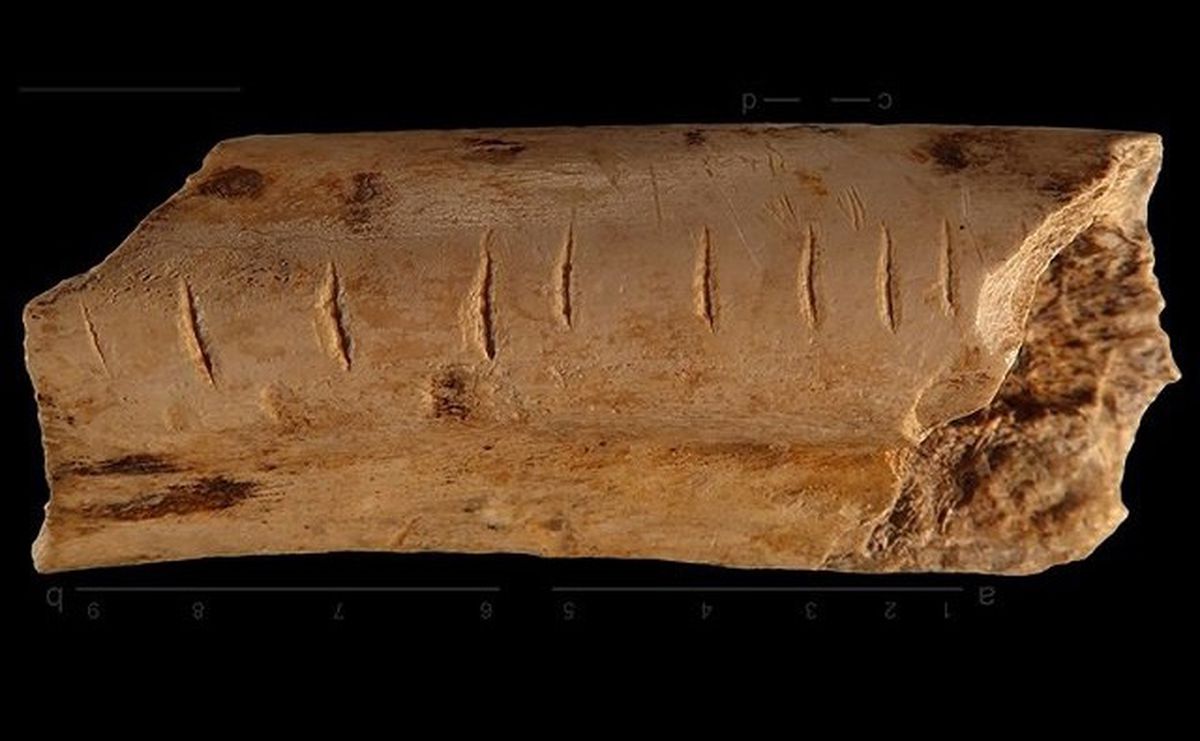 Not all great inventions are the work of our species. The wheel and the alphabet are, obviously, since we were already the only humans on Earth when they were invented. But we cannot patent fire, because it was domesticated at the time of Homo erectus, when we were not even a distant project. And now the Neanderthals threaten to expropriate another of the great inventions of all time, numbers.

The reason is a hyena femur unearthed half a century ago at the archaeological site of Les Pradelles, near Angouleme, in southwestern France. The bone exhibits nine parallel and nearly identical notches, and it seduces the eye as some kind of numerical symbol. As it has been dated to 60,000 years ago, and at that time there were only Neanderthals in Europe – it would take modern humans 20 millennia to appear there – we must conclude that it was recorded by a Neanderthal. If it were true that the bone represents a number system, the patent on the numbers would have to be ceded to the Neanderthals. Imagine the money we owe you. We had better not resuscitate them, especially if they know how to do the math.

Any cyclical behavior of nature constitutes the remote root of a number system. The cycle of days and nights, the phases of the Moon, the succession of the seasons, let’s not talk about the cicadas that emerge every 17 years in the Americas, they have been conditioning biological evolution since the origin of time, and not It is strange that we have several types of watches incorporated as standard that go ‘counting‘the peaks and valleys of those cycles. Being strict, each one of our cells is a clock. At the scale of genes and proteins, we are rhythm upon rhythm in an infinite regression like your image in a two-mirror closet. But that does not reach anywhere near the category of a number system, an artifact that must be used to count things and manipulate the symbols that mean quantities.

Scholars have traditionally taken for granted that our species is the only one that possesses an innate sense of nature. numerousity, or the quantification of objects. That prejudice has been revealed in recent times like a big mistake. Fish, bees, and chickens immediately recognize the numbers 1 through 4. They also distinguish between two large numbers, as long as they are different enough. As it says Colin Barras in Nature, distinguish 10 objects from 20 objects at a glance, but not 20 from 21. This sense of numerousity it’s nearly identical to what a six-month-old reveals, and it’s not hard to imagine why in evolutionary terms. As someone said, who co-founds 2 predators with 20 predators goes extinct in the form of chops.

But the sense of numerousity not enough either. A number system worthy of the name is based on symbols that can be manipulated. This is the way to move beyond the 4 that instinct offers us, and also to distinguish 20 from 21. And here we humans are genuinely unique on Earth. No other animal uses symbols to represent numbers, nor can they pass on that knowledge to their children. But then what about Neanderthals? The truth is, that poor hyena’s nine-notched bone is a loose argument. We need a lot more than that before we hand over the patent to our cousins.

Although many people prefer to think that Neanderthals were as intelligent and creative as we are, the classic arguments against it still apply. Neanderthals lived in Europe and Western Asia for 300,000 years, yet the archaeological sites they left behind are virtually identical across space and time. The creative settlements of Europe, which differ by a few kilometers or a few years, and show advanced and innovative tools, coincide with the arrival of the Homo sapiens to the continent. And recent data add doubts to Neanderthals’ brainpower.

The genes associated with self-awareness they were less common in Neanderthals than in our species. Geneticists and cognitive scientists have defined three brain networks essential for learning and creative thinking. In total there are 972 genes, and their comparison between sapiens, Neanderthals and chimpanzees leaves the last two quite badly. This is not about anthropocentrism, but about hard data. Neanderthal genetic repertoire, neanderthal scientists do not believe, would have allowed for society-oriented behavior, acceptable interaction with strangers, or even incipient narrative art. Emotionally we were very similar, but who wasn’t? The truth is that our fear is very difficult to distinguish from that of a rat. The numbers are another story.