The inmate in Province burns: the PRO and Elisa Carrió went out to attack Facundo Manes, who is advancing in his candidacy 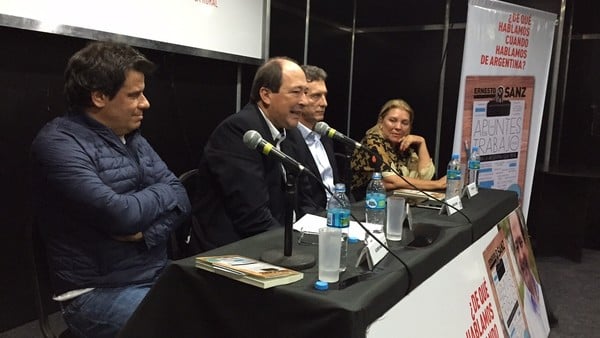 The burden of provisional scrutiny in Jujuy advanced slowly. Gerardo Morales waited confidently with Facundo Manes, Martín Lousteau, Maximiliano Abad – head of the Provincial Committee – and local leaders. At one point they talked about Increasing “attacks” on neuroscientist since he gave signals about the possibility of being a candidate in the province of Buenos Aires. The crosses came from a sector of the PRO, and then Elisa Carrió’s lunges reached the bunker.

“That boy who now wants to enter politics to become president in two years”, Started the former deputy of the Civic Coalition, who had received Manes 10 days ago at his home in Exaltación de la Cruz.

“Those who want to arrive by helicopter to the Casa Rosada They are not from one party or another, they are theirs. I would ask for humility “, Carrió continued in an interview in TN, he also entrusted him with pretending” that we all make ourselves available “, and closed:” To a lot of young political leaders lacks reading. It is one thing to be a neuroscientist and another is to have culture ”.

Before Carrió’s onslaught, the PRO had sown doubts on whether Manes will finally confirm his candidacy to dispute an eventual intern with Diego Santilli, the candidate of Horacio Rodríguez Larreta and who advanced last week with the support of a group of mayors.

From that sector they exhibited the weight of the Buenos Aires municipalities governed by the PRO (Lanús, Tres de Febrero, La Plata, Mar del Plata and Bahía Blanca, among others), with more voters (a ratio of three to one) despite the fact that a greater number (38 to 16) are in the power of radicalism.

Federico Angelini, deputy for Santa Fe and vice president of the PRO, publicly scratched it in football terms: “Much feint, it seems Burrito Ortega.”

Until the irruption of Manes, the letter with which radicalism seeks greater relevance in the Province and in the discussions of Together for Change, the disputes were concentrated on the PRO with the duel between Mauricio Macri and Rodríguez Larreta, with the wrestling for the candidacies between María Eugenia Vidal and Patricia Bullrich in the City and Santilli and Jorge Macri in Buenos Aires.

The backlash came from Morales, after celebrating his triumph in Jujuy with Manes himself and Martín Lousteau on stage.

“I am convinced that Facundo is going to be our candidate. Radicalism has to fight in the STEP in the province of Buenos Aires. Let no one cut their veins for that. Cambiemos arose in 2015 in an internship between Macri, Sanz and Carrió ”, assured the governor, one of the promoters for Manes to announce this time the move to electoral politics and decided to seek after the election in his province a greater prominence at the national level. At the end of the year he will go for the succession of Alfredo Cornejo – he will not be able to be reelected – in the National Committee.

Manes took the criticisms as a sign on a positive point, according to the radicals who discussed them with him in the last hours. “He sees that his presence is bothering because the thing works. He asked us to go out to dispute with the macrismo“, Transmitted one of the UCR referents, and replied to Carrió:” She states that Facundo is the problem, as if the PRO allowed her to lead on behalf of the unit, and that is not real. “

Gerardo Morales, with Facundo Manes and Martín Lousteau in the celebration of the triumph of Cambia Jujuy, this Sunday.

Morales raised it publicly: “Lilita is very oscillating. That he ends up fixing with the PRO, who promised to be first deputy “. In turn, they also attributed Carrió’s questions to the possibility of Margarita Stolbizer joining Juntos por el Cambio and joining the list with the neuroscientist. Both ended faced after the dissolution of UNEN.

In his public appearance again to shake the board in the previous to the definitions, Carrió moved a chip in favor of Santilli. “He is the one who measures very well today in the suburbs and has generosity. He is not the one who hinders a negotiation“, He said, and also vindicated Macri:” Over time he will be recognized as a great president. ” With the founder of the PRO he had approached positions with conversations last week.

Manes will take another step towards his possible candidacy with a virtual meeting this Tuesday with 32 radical mayors of the province, after the trip to Jujuy and the presence on Saturday in the National Committee for the 130 years of the party. “Facundo enters very well in districts such as Bahía Blanca, La Plata, Mar del Plata and Vicente López,” the UCR dismissed the alleged advantage of the PRO for governing those municipalities.

The coreligionists take as a fact the neurologist’s application to dispute an intern and warn that the wear and tear of his figure weakens Together for Change. Carrió had considered “Functional to Kirchnerism” the competition in the PASO. The difficulties to reach an agreement include the unresolved discussion with Jorge Macri in the PRO, the assembly of Gustavo Posse in parallel to the ruling party of the UCR and the negotiations with the sector of Emilio Monzó and the Peronist leg of Miguel Pichetto and Joaquín de La Tower.