The husband of the Spanish aid worker imprisoned in Israel: “She collapsed in tears when I saw her after four months in prison” 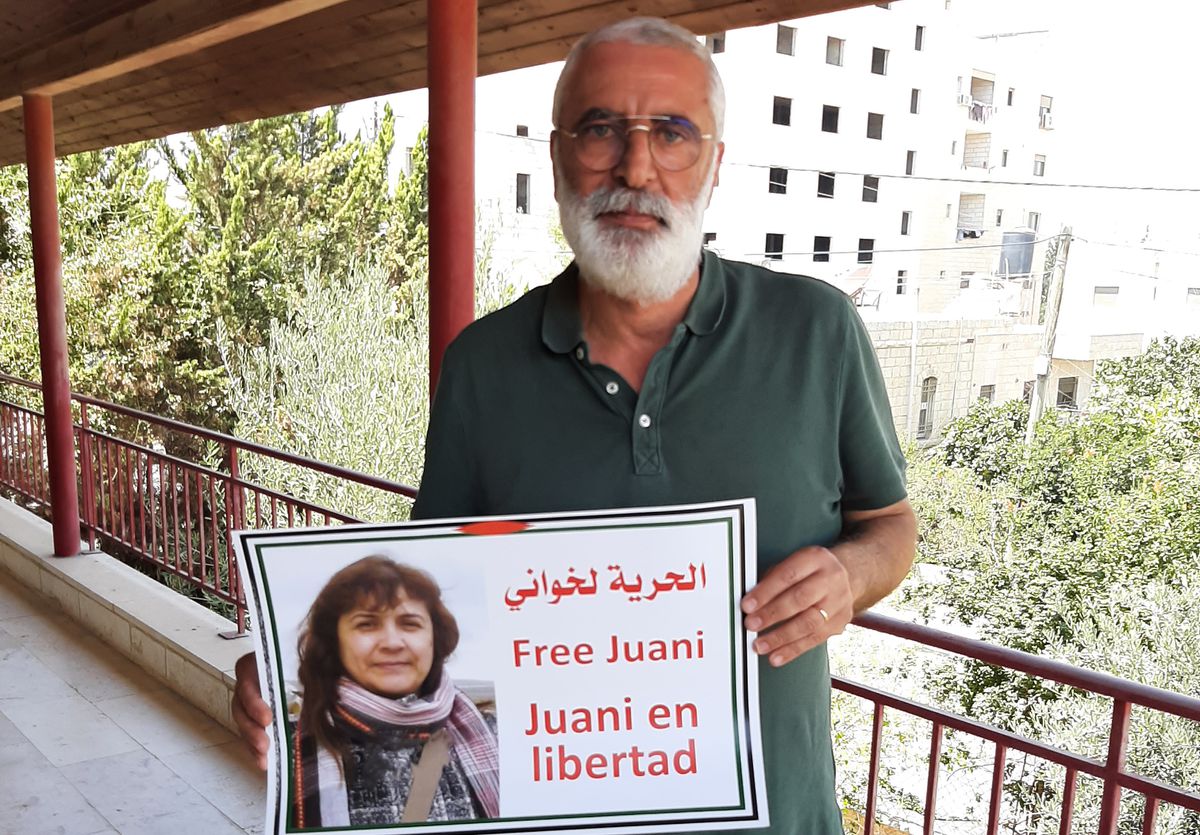 Elías Rismawi, 60, is a Christian Palestinian who works in a family pharmaceutical company in Beit Shaur, on the outskirts of Bethlehem (West Bank). Almost four months after the arrest of his wife, the 62-year-old Spanish aid worker Juana Ruiz Sánchez, who has lived in Palestine since 1985, continues to be dejected by the long absence. The Israeli military justice accuses Ruiz of belonging to an “illegal organization” that diverted funds from international cooperation to a Palestinian group classified as a terrorist. “When the soldiers came to take her away at four to six in the morning of April 13, there were dozens of soldiers with armored vehicles at the end of the street,” Rismawi pointed out this Monday from the balcony of the middle-class single-family house. where he has resided for decades, a few hundred meters from the Basilica of the Nativity. He had not seen his wife up close until last week, when he was able to visit her through the Red Cross in a prison in northern Israel: “He collapsed in tears. I was very excited. Then he calmed down and began to tell me about the nightmare he has been experiencing since his arrest ”.

“The soldiers asked to speak to her separately for about 10 minutes and told her that she should accompany them for questioning.” With a break of pain, Rismawi recounts what happened four months ago. “She thought it was a matter of a few hours, that she would be back soon. They took her away and I didn’t see her again until last day 4. It was at the Damon’s prison in Haifa. I was behind glass and heard his voice through a phone. “

The memory becomes unbearable: “Now I feel frustrated and powerless in the face of this injustice. Let the soldiers break into your house and take your wife … I hope tomorrow [por este martes] appear in person for the first time before the military court of Ofer (West Bank) and can see it again ”, he muses in a house that seems to seem empty. “At least his health is fine. And moral, more or less. The one that can be had in jail. But she is still worried about what is happening; without understanding why he is behind bars ”, he recounted in a somewhat rusty Spanish, interspersed with the characteristic Levantine Arabic accent.

The Israeli military court has postponed the trial of the Spanish aid worker on Tuesday until September 1. The lawyer has demanded that the humanitarian worker have an interpreter.

Juana Rodríguez arrives handcuffed at the Israeli military court that is trying her in the West Bank. She looks tired after four months in jail. “I’m fine,” he says in a small voice pic.twitter.com/xx9ul4nRyN

Elías’ visit to Juana lasted 45 minutes. But he had to go through a Stations of the Cross, he assures, throughout an entire day. First, the early morning departure from Beit Shaur, with stops in Bethlehem and Hebron to pick up other families of prisoners. And a search at a border checkpoint in the southern West Bank, then heading north by changing buses, led by a representative of the International Committee of the Red Cross, as if crossing a war front. Upon arrival at the Haifa prison, more searches, interrogations, delays, rudeness, waiting … Until finally he found her behind glass in the prison parlor.

His wife told him that she was afraid of being transferred to testify before the Ofer military court, north of Jerusalem. “He told me that he travels inhumanely in a van and has to spend a night or two in HaSharon jail, north of Tel Aviv,” he recalls. “In that prison, he remained in solitary confinement for four weeks after his arrest,” he details with a stab in the throat the worst moment of Juana Ruiz’s tribulations. “She was alone for more than 10 days. I was depressed. Nobody entered there. Before, she had been questioned almost without pause. Sometimes for eight hours at a time ”.

“We met in Madrid in 1982, through mutual friends. I was studying Pharmacy at the Complutense University for two years and we started a relationship ”, recalls Rismawi. His father, who was president of the Palestinian Basketball Federation, had taken him to a sports meeting in Madrid in 1978, and since then he has wanted to study in the Spanish capital. “My thing now is soccer; I never missed a Real Madrid game when we went to visit his family ”, he acknowledges as he comes out of dejection for a moment during the interview.

In 1984 he decided to return to Palestine and asked Juana Ruiz to marry him and accompany him. “But I told her that this was an unknown world for her. I didn’t want to cheat on her, that’s why I invited her to spend a month here, to get to know my family and the people before deciding ”. They were married in Spain in 1985 and went to live in Palestine. She took care of the children at the beginning: María, who was born in 1986, and Georges, in 1990. And from 1993 she began to collaborate with the NGO Health Work Committees (HWC), which provides health services to the most disadvantaged Palestinian population. Shortly after, he was offered to work in the area of ​​international cooperation with Spanish-speaking countries. Soon he began to carry out projects with public organizations and NGOs.

“He never had a problem. He traveled at least twice a year to Spain. No detention. No record in the checkpoints [puestos de control] Israelis, or at the Ben Gurion airport, ”asserts her husband. “Up to now. Our life has been turned upside down due to suspicions of non-existent crimes ”. The Shin Bet (Israeli internal security) and the military prosecutor’s office accuse her, along with other members of her NGO, of participating in a network to “illegally introduce funds into the Palestinian territories”, diverted to the Popular Front for the Liberation of Palestine, a group considered a terrorist by Israel and the European Union, “through fraud, forgery and deception” of donors from European countries. “She did not manage funds. The cooperation money went to the bank, and she never signed a check, ”her husband replies. “He has been managing projects for 28 years.”

Her children live and work in Spain, from where they have followed with concern the judicial ordeal that their mother is suffering, and collaborate with the solidarity platform made up of 140 organizations that demands their release. “It is getting very long,” confesses the Christian Palestinian. “And there is no clear evidence against him. They first interrogated her for three weeks and then brought the charges, as if they wanted her to accuse herself. “

In the entire judicial file, she appears as Juana Rismawi, by her married name. As a resident of the West Bank, she is subject to the martial law that governs Palestinians under occupation since 1967. She is aware, according to her husband, that the trial can last at least until October. The Spanish aid worker will be 63 years old next month. She suffers from severe back pain and has to take medications to control high blood pressure and cholesterol.

“We have to be strong. This can take a long time. The important thing is that the trial begins at once. But I am confident that everything will end well and he will be released, ”Rismawi muses aloud. “She has only dedicated herself to helping people with medicines, nursing homes, nurseries …”. The defense lawyer of the Spanish aid worker is now going to try to at least release her from prison and go to the situation of house arrest.

“We are not active in any party or organization, but we are against the occupation, like all Palestinians. If that is Juana’s crime ”, the spirit of the humanitarian worker’s husband lights up,“ Israel will never have prisons for everyone. Although we already live in a big jail ”.