The Heritage Club presents a handicrafts show in front of the Sharjah Days visitors. 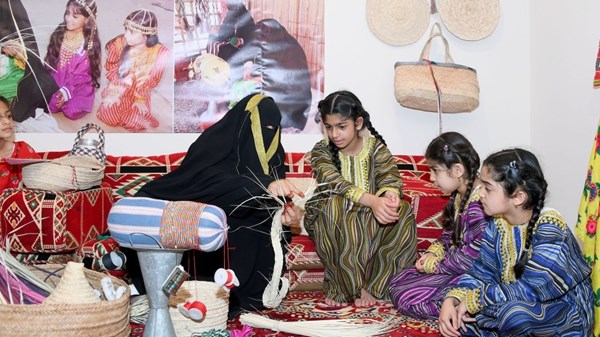 Abu Dhabi (Etihad)
Today, Saturday, the Emirates Heritage Club concluded its participation in the 19th edition of the “Sharjah Heritage Days” festival, which was organized by the Sharjah Institute for Heritage from March 10 to 28, under the slogan “Heritage and the Future.” The club’s pavilion stated that the Emirates Heritage Club’s objectives from participating in the festival were fully achieved, as the club succeeded in highlighting and introducing the country’s heritage among Al-Ayyam’s visitors from various peoples, who showed great appreciation for the cultural heritage of the UAE.
Al-Mannai noted the great effort of the Sharjah Institute for Heritage in organizing the festival, stressing the importance of such events in strengthening the bonds of relations between peoples through the exchange of heritage knowledge, and adding that providing such an opportunity for cultures for cross-fertilization represents a gateway to spreading peace, tolerance and mutual respect among the peoples of the world, which are rooted values In the Emirati character, as it is found in many peoples.
The Emirates Heritage Club pavilion provided visitors throughout the festival with a lively learning opportunity and an experience of handicrafts through daily workshops. The traditional women’s crafts workshops represented a focus that attracted different nationalities to learn about the works of Sadu, Al-Tali, wicker crafts, and spinning, and their experience under the supervision of the club’s craftswomen, which represented a distinctive heritage experience. to many. The popular games workshops organized by the pavilion also attracted young people of different ages, who were introduced to the popular games and their skills.
The marine workshops, which showcase various aspects of the country’s maritime heritage, provided an opportunity for visitors to get acquainted closely with the activities related to pearl diving and fishing, where they obtained practical experiences about their tools, manufacture and use, such as debt, weaning, nets of various types, tawasha, and types of heritage bearings, as well as information A theory on sinks, diving times, fishing, fish species, and other marine heritage vocabulary.
The participation of the Zayed Center for Studies and Research of the club came to enrich the cultural aspect in the club’s pavilion, through the exhibition of heritage publications, which provided visitors with scientific documentation of the history and heritage of the country through the club’s books and publications, especially in the collections of Nabati poetry and books of historical and heritage studies, as well as the numbers of the “Turath” magazine. » issued by the club.
The Zayed Center for Studies and Research also organized a cultural program accompanying the club’s participation in the festival, during which it hosted a number of researchers in heritage lectures, as it hosted researcher Hassan Ali Al Hurghada in a lecture “The Emirati Encyclopedia of Crafts, Professions and Traditional Industries and the Importance of Documenting Craft Heritage in the UAE.” And researcher, plastic artist and critic Ali Al-Abdan, who gave a lecture “Folk Arts in the Emirates: A Heritage that Reflects the Identity and History of the Nation,” and Dr. Khawla Al-Alili, who specializes in Islamic history and civilization, in a lecture entitled “Dates between trade and heritage.”
The center participated in the cultural café program for Sharjah Heritage Days, where Fatima Al-Mansoori, Director of the Zayed Center for Studies and Research, was hosted to speak at the “Cultural Institutions and the Future” symposium, and Ms. Latifa Al Nuaimi, responsible for cultural activity in the center, at the “Emirati Heritage and Education in the UAE” symposium, and Dr. Muhammad Al-Fateh Zaghal, principal researcher at the center, to speak at the symposium “Cultural Cities… Sharjah as a Model”.

Weather Finnish Meteorological Institute: Winter storm hits the southern and central parts of Finland today - driving conditions are very bad in some places due to snowfall