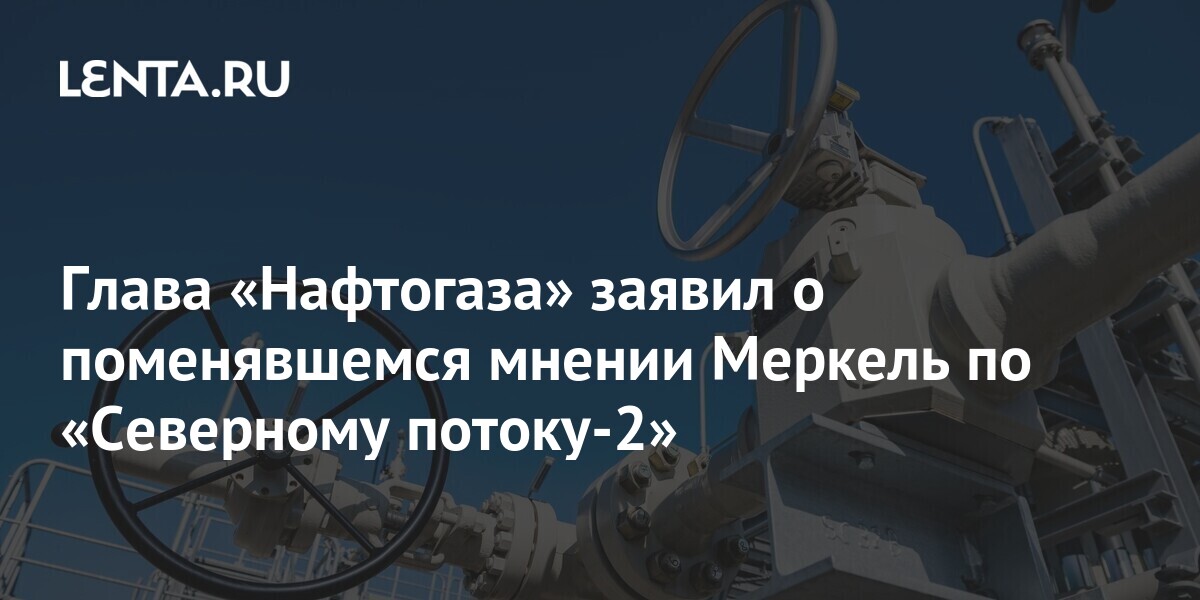 The head of Naftogaz, Yuri Vitrenko, announced the changed opinion of German Chancellor Angela Merkel on the Nord Stream-2 gas pipeline. He explained his position on the air of the Ukraine 24 TV channel.

It seems to me that we were able to convince Mrs. Merkel in many ways, and she even changed her point of view on this project in many ways.

Vitrenko assured that the chancellor, first of all, “saw real threats to the security of Ukraine.” According to him, for the Ukrainian side it is not only a matter of money and economy, but also of “real security”. “Secondly, we explained that some such easy decisions, even, for example, her talks about the alleged continuation of the current transit contract for 10 years … I think she understood the threats posed by simplified decisions”, He added.

In addition, the head of Naftogaz noticed “positive signals” following the talks between Angela Merkel and US President Joe Biden. It was expected that politicians “will voice some kind of decision that was made for Ukraine,” and that it, in turn, “will carry empty promises that do not give Ukraine anything.” “And we see that there was no such decision without Ukraine,” Vitrenko noted, regarding this as a positive development of events. He suggested that this could be influenced by negotiations between Merkel and Ukrainian President Volodymyr Zelensky.

However, not everyone in Ukraine adheres to a point of view similar to that of Vitrenko. Thus, the press secretary of the President of Ukraine Sergey Nikiforov criticized Biden and Merkel for the lack of specifics on the opposition to Nord Stream 2 during their negotiations. He thanked Berlin and Washington for their statements that Russia cannot use Nord Stream 2 as a weapon and the need to maintain Ukraine’s status as a gas transit country. At the same time, the specifics of how the parties will try to ensure this have not been heard in Kiev.

Oleksiy Arestovich, an advisor to the Kiev delegation in the Trilateral Contact Group, a freelance adviser to the head of the office of the President of Ukraine, accused Angela Merkel of surrendering the interests of Ukraine in favor of Russia. In his opinion, the visit of Vladimir Zelensky to Germany and his negotiations with the Chancellor were fruitless. In particular, the Ukrainian president did not find a common language with Merkel on the completion of the Nord Stream 2 gas pipeline, Arestovich said.

Verkhovna Rada deputy Oleksandr Dubinsky said that the Ukrainian authorities are misleading citizens with their statements that the Russian gas pipeline can be blocked. He stressed that Ukraine cannot influence commercial projects that are outside its territory. “I do not yet know of a single case of stopping after the commissioning of any” streams “that have already been built,” he said.

The meeting between Vladimir Zelensky and Angela Merkel took place on July 12 in Berlin. At it, the Ukrainian leader stated the need to discuss the construction of Nord Stream 2 in the Normandy format. According to the head of the Ukrainian state, the launch of the pipeline poses a threat to the country’s energy security, therefore, a dialogue and guarantees from the countries of the European Union (EU), Germany and France are required.

After the talks, Merkel announced that Germany will continue to support Ukraine in maintaining gas transit through the country after the launch of Nord Stream 2, but she has no intention of scrapping the project.

According to Vadim Rabinovich, Rada deputy from the Opposition Platform – For Life party, the chancellor politely refused the Ukrainian president to discuss the project in the format of the Normandy Four. According to him, Merkel acknowledged that Germany and France are partners of Ukraine in various fields, but they do not plan to discuss gas together with the Minsk agreements.