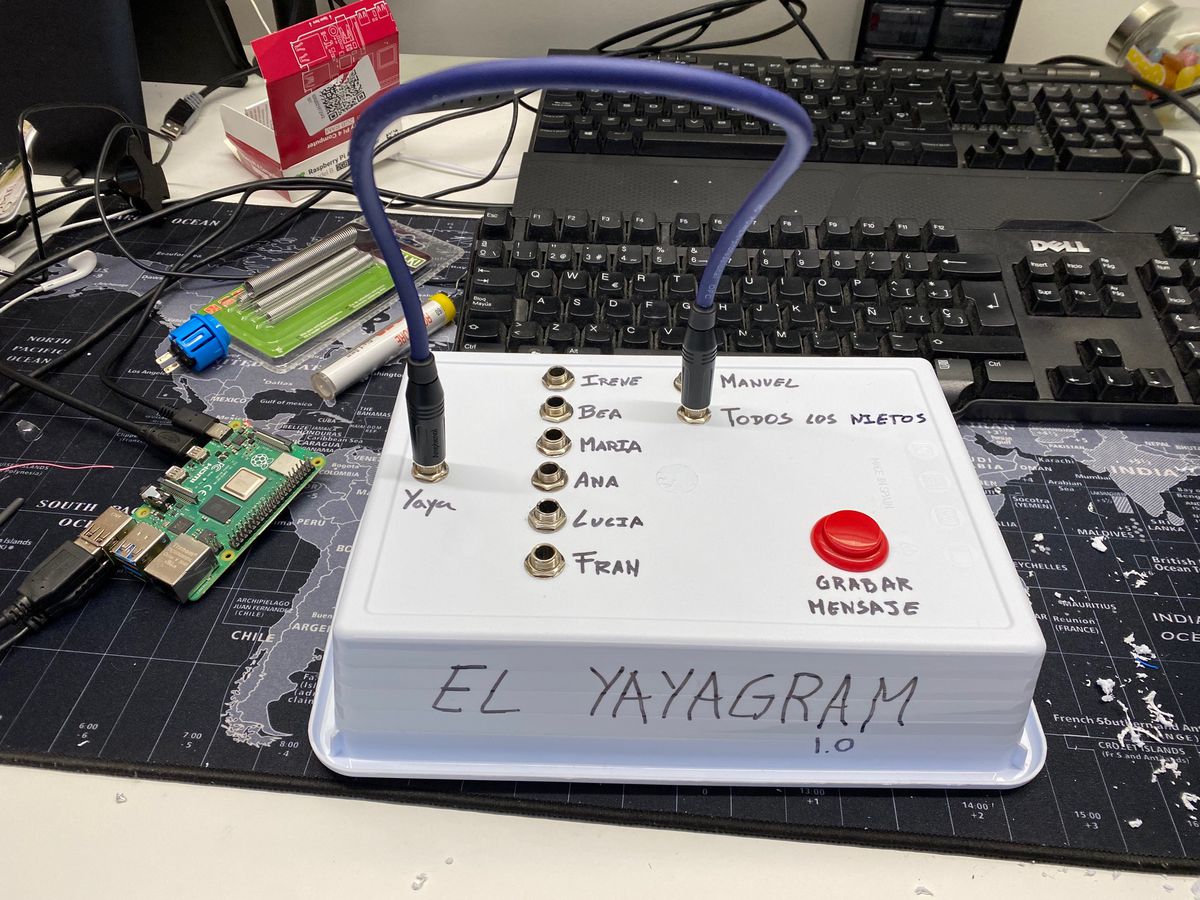 There are great entrepreneurs who started in a garage and others who started inventing because their grandmother couldn’t talk to her grandchildren on the phone or video call. The computer engineer from Burgos, Manuel Lucio, made a virtue of necessity when he saw that Doña Felisa Romano, 96, who lives in Burgos, could not see her granddaughters. Autonomous confinements prevent the matriarch from touching her offspring, spread across Oviedo, Bilbao and Madrid. Since he needs help picking up the regular phone, making video calls, or typing instant messages, he gets frustrated. This dependence caused the eureka of his clever grandson, who has engineered the Yayagram so that the grandmother, alone, can send and receive messages.

Lucio, 35, defines his contraption, named after his only grandmother, as a “junk” and avoids bombastic words to talk about a “box that allows you to communicate through voice messages.” In this case, with the granddaughters Lucía, Beatriz, Irene, María and Ana, since her grandsons Francisco and Manuel do live in the same city. The system has a button that the woman must press to start recording her voice and then, like the old telephone operators known as Las chicas del cable, select who she wants to contact. Then he pronounces his message and it is sent, like a normal audio, and it reaches the Telegram messaging application that his relatives have downloaded. Then they get a notification: “Yayagram has a message for you!” and they can listen to their yaya. To answer they have to type normally and send their answer. Granny Felisa then receives the message and can physically read it, in large print, thanks to a small thermal printer “like those in supermarkets” connected to the Yayagram. Her audacious grandson explains that she “doesn’t really know how this is going” but is “enchanted” by the mechanism. The device works with WiFi and connects to the electrical network like any household appliance. In addition, it has handles so that its owner can transport it if she decides to travel.

The engineer laughs when he remembers that the first test he did with her to tell them what they were going to have for dinner: the old woman was not sure and he informed her that they were playing artichokes with ham. “We had a fluid conversation that was impossible before,” says Lucio, as Felisa Romano’s osteoarthritis prevents her from dealing with screens or telephones. In addition, her hard of hearing makes her uncomfortable to chat on a mobile phone. A solution was needed that appeared out of nowhere and without a large financial outlay. The printer has cost about 30 euros, the cables and Jack connectors only 10, the microphone six and the “brain of the junk” another 30, which is the price of a Raspberry, a “tiny computer” that organizes the entire procedure. Lucio vindicates local commerce to buy components, guarantee their quality and complete the cycle of local entrepreneurship for those who enjoy “tinkering” in his free time.

The computing of the system is executed through a program that he himself has created and the existence of programming languages ​​in Telegram, collected in a virtual library on the Python platform. The first experience has made him see that the granny finds it strange to press a button to emit an audio, something totally normal for current generations, and go to the microphone. Everything has a cheap solution: his grandson is considering replacing it with an old telephone because the old woman does have the habit of picking up a receiver and talking to the machine. The success of his work makes him consider patenting the Yayagram, but he admits that it does not take away his sleep: “I would rather see people building it for their grandparents.”

Manuel Lucio is overwhelmed when discussing the impact his artifact has had on social media. He has gone from a couple of interactions in his tweets to receiving more than 40,000 in the thread in which he recounts his adventures to develop the device. “I’m overwhelmed,” he admits, and asks for time to respond to the multitude of contacts and private messages he has received asking for advice. He does not want to give them pumpkins, even less after placing them in the tweets to write to him with any questions, so he will have to make time for his fledgling community. This engineer is already thinking about how to better show his invention. Perhaps prepare a “more advanced” tutorial for those who also need to communicate with their yayas and, even with current cutting-edge technologies, can do it comfortably.

"Everything goes wrong": CDU decides in a night session for Laschet - with chaos and numerous breakdowns

Call of Duty: Warzone’s “Big Bertha” meta and the state of solos