The Grand Mufti of Lebanon: The country is heading towards total collapse 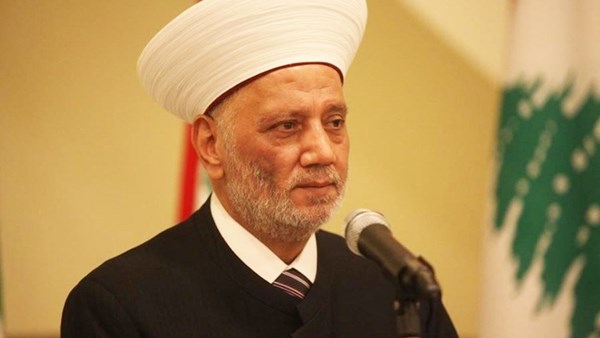 The Grand Mufti of Lebanon, Sheikh Abdul Latif Derian, warned yesterday that Lebanon is heading towards a comprehensive collapse if steps are not taken to address the crisis caused by the financial collapse.
The Grand Mufti of the Republic, Sheikh Darian, said in the Friday sermon, according to what was reported by the National News Agency: “We fear after this long time that the Lebanese people will run out of patience, and we will all fall into the furnace of total chaos, whose manifestations we are beginning to see in various fields.” He continued, “We are not satisfied with being false witnesses to what is happening in our country. The matter needs serious and immediate treatment, and patching does not work. What happened in the explosion of the port of Beirut, the explosion of a diesel tanker in Akkar, and the mobile clashes in some Lebanese regions, are caused by this patchwork. Let us quit our confusion, otherwise we are really going to the worst and to a complete collapse.”
The Mufti urged Aoun to try to save what was left of his mandate.
He said, “I am giving advice to the President of the Republic, Michel Aoun, try to save what is left of your era, or else we will go to the worst and beyond hell, to the bottom of Hell as our skin is.”