The Grand Imam: Al-Azhar supports world peace and the consolidation of human brotherhood 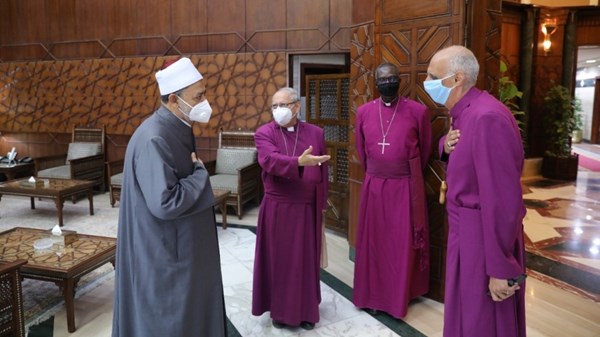 Ahmed Shaaban (Cairo)
The Grand Imam, Dr. Ahmed Al-Tayeb, Sheikh of Al-Azhar Al-Sharif, affirmed that religious scholars play an important and effective role in serving tolerance and coexistence among people, and that Al-Azhar Al-Sharif deals with this issue with patience, wisdom and perseverance and exerts great efforts in this regard in an effort to support world peace and consolidate human brotherhood.
This came during a meeting with the Grand Imam, today, Sunday, with a church delegation headed by Archbishop Jose Veron, Secretary General of the Federation of Anglican Episcopal Churches in the World, Dr. Mounir Hanna, Archbishop of Alexandria Province of the Anglican Episcopal Church, and Dr. Sami Fawzy, the new Archbishop of Alexandria , at the headquarters of the Sheikh of Al-Azhar in Cairo.
During the meeting, the Grand Imam expressed his appreciation for what Dr. Mounir Hanna offered during his work in the previous period and his cooperation with Al-Azhar Al-Sharif in the file of dialogue, tolerance and coexistence. The Sheikh of Al-Azhar also congratulated the new president of the bishops of the Anglican Church.
For their part, the bishops delegation expressed their happiness at meeting the Grand Imam, and their pride in his eminence’s global efforts in the field of dialogue and human brotherhood among followers of religions and the enlightened Azhar discourse that is based on accepting difference and diversity.
The delegation of bishops affirmed that the meetings and words of the Grand Imam bear witness to the strength of his statement and position in the field of consolidating brotherhood, moderation, acceptance and the other, stressing that religions are innocent of terrorism, exaggeration and extremism.