The Government approves aid of 3,000 to 200,000 euros for the self-employed and companies 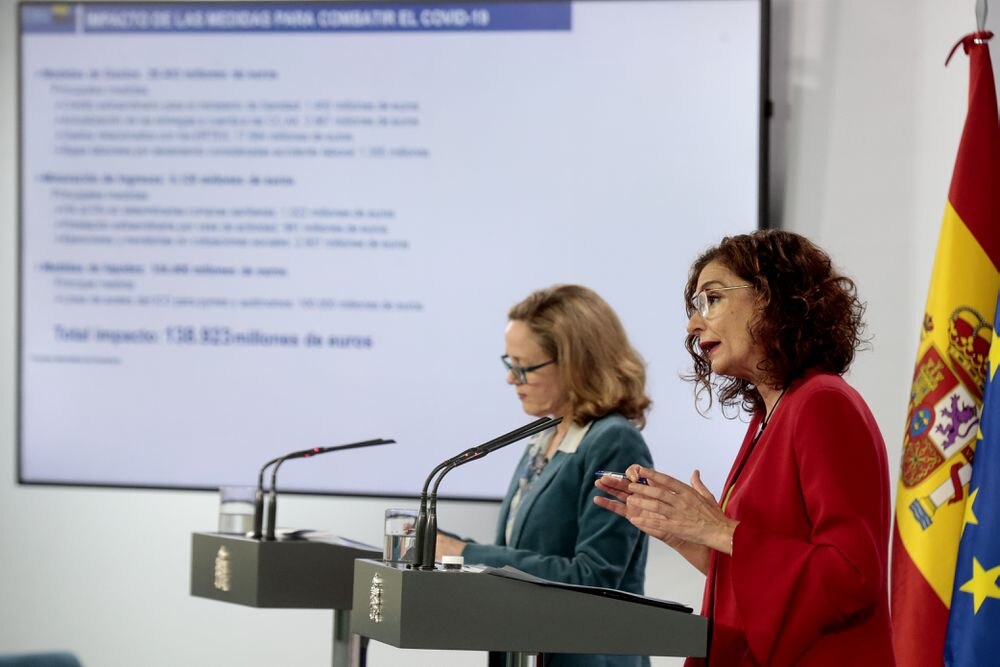 After months of dragging its feet and with fights in the Government over the size and design, the business support plan finally arrives. The Council of Ministers approved this Friday direct aid to companies and the self-employed of between 3,000 and 200,000 euros. These compensations will be provided for a drop in billing of at least 30% compared to 2019 in the sectors most affected by the restrictions. And the money will be a finalist: you will have to dedicate yourself to paying bills and debts for supplies, suppliers and payroll. The self-employed who pay in modules will receive a fixed amount of 3,000 euros. For the rest, it can range between 4,000 euros and 200,000 euros depending on their size and fall in income.

Companies, unions and the Bank of Spain had been claiming these subsidies for months. The fund for direct aid to companies will amount to 7,000 million, an amount closer to what Podemos was asking for and the pressure from Moncloa. And it will be managed by the Autonomous Communities, as required by Finance and Economy. Of these, 2,000 million will go only to the Balearic and Canary Islands for having suffered a much worse blow by having a greater weight of tourism in their economies. The distribution of the other 5,000 million will be made with the criteria already used for the European fund React EU, which generated protests from some: the impact on regional wealth, unemployment and youth unemployment. And it will be ready within a month and ten days, a time that is granted to be able to organize the platform in which the Tax Agency will certify to the autonomies that there is a drop in income. That is, the one who has not declared will be excluded from the aid.

The initial 30% drop in income is not covered

Aid can only be accessed from a minimum drop of 30% in billing and provided that a positive net result has been recorded in 2019. The first 30% drop is not covered. The maximum aid that will be granted will be 40% of everything that exceeds the first 30% drop in turnover in the self-employed who do not pay taxes in modules and in SMEs with up to ten workers. For the rest, it will be 20% of what exceeds the 30% decrease in income. That is: it is designed for large income losses and therefore the impact of the aid is reduced. In any case, the minimum will be a fixed amount of 3,000 euros for self-employed in modules and 4,000 for others. And Economía explains that ERTEs have already compensated for part of that 30% drop that is not being addressed.

To set the amount, proportional sections will be established depending on the size and the drop in billing. And the communities will be able to put additional criteria. The subsidies will last until the end of 2021. And they will have as a condition that the companies maintain their activity until June 2022. The beneficiaries will also be required not to raise executive salaries, not to distribute dividends, not to be active in tax havens and that they are up to date with their payments to Social Security and the Tax Agency.

The sectors that benefit will be those most affected by the pandemic: “All companies and freelancers in the hotel and catering sector, sectors with access to ERTE expanded in Royal Decree-Law 2/2021, and others especially affected will be able to access by the pandemic, such as the activities of the manufacturing industry related to commerce and hospitality; wholesale and retail trade; auxiliary transport sectors; aeronautical maintenance, and activities related to culture and sports activities. In total, the resources will be able to reach about a hundred activities ”, says the Economy press release.

In addition to the direct aid fund, there will be two others. One will be endowed with 3,000 million so that the ICO can accompany the processes of flexibilization and restructuring of its loan lines on three levels: in a first step and based everything on the analysis made by the client’s bank, the terms of payment. In a second instance, loans with a public guarantee can be converted into participative loans, something that will reinforce the capital of the company as it is the last in the right of collection and receives an interest depending on the progress of the company. And only as a measure of last resort will removals be allowed. This entire process will be governed by a code of good practices that will be approved by the Council of Ministers. The State and the entities will absorb the losses in the same proportion that they had of risk: the ICO lines have mobilized some 121,000 million with an average State guarantee between 70% and 80% of the credit.

The third fund will serve to recapitalize medium-sized companies, will have an endowment of 1,000 million and will be managed by Cofides, the company with public-private capital controlled by Industria. Thus, this scheme will have three levels of action: companies may first request direct assistance. They will then be able to restructure their debt and ultimately turn to Cofides for a recapitalization. This fund will inject resources with loans, participative credits or capital. And it will be used for those companies that are not large enough to access the SEPI fund, whose minimum injection is 25 million euros.

The Government has also extended the bankruptcy moratorium until December 31. This suspends the obligation to request bankruptcy for those companies that go into insolvency. And it is already preparing a reform to facilitate the exoneration of debts and get more companies out of the contest.

The Executive has also increased the period to four months to be able to delay the payment of tax debts without late payment interest.

After months of dragging its feet, Spain finally has a direct compensation scheme for companies. Much later than other countries and on a somewhat smaller scale, partly due to a deficit and public debt situation worse than that of the rest. The ICO and ERTE loans are considered a success that allowed the reactivation of the third quarter of last year, recovering two thirds of the 90,000 companies lost according to Social Security data. But the pandemic has dragged on. And in the first two months of 2021, 20,000 companies have been lost. Now the loss amounts to about 50,000. In addition, there is the risk that over-indebtedness will prevent companies from investing, hiring, or responding to the increased demand associated with the recovery.

Broadly speaking, the fall in GDP last year was about 100,000 million euros, which would have been greater if it had not been for the almost 60,000 million that the State put in the ERTE and the termination of the self-employed, and another 10,000 million in unemployment benefits. In addition, companies reduced costs by not producing. And everything else was partially mitigated with the ICO lines, about 120,000 million of debt. Hence the need for a plan to alleviate business indebtedness. In the first half of the year, GDP will remain around 50 billion below the pre-pandemic level. And that until May the State will have injected into the economy about 25,000 million including this plan, the ERTE and the 2,000 million that the communities of the React EU fund will have for aid to companies. In other words, the numbers indicate that something more might be needed.

As with the ICOs and ERTEs, you can learn what works and what doesn’t, and modify the details accordingly. Although the Government has extended the aid to almost a hundred activities, some economists criticize that they are given by sector. They also recommend that you be very careful about putting too many requirements, because then the plan could end up as the minimum rent, which does not just start with all its power entangled in a complicated design. Communities are already warning that they will have many difficulties in complying with the subsidies law and verifying the object of the aid: debts with suppliers and creditors since March 2020.

From bakeries to taxi drivers: these are the self-employed and businessmen who will be able to request rescue aid

Meeting in Ankara: seating arrangements at Erdogan’s cause criticism