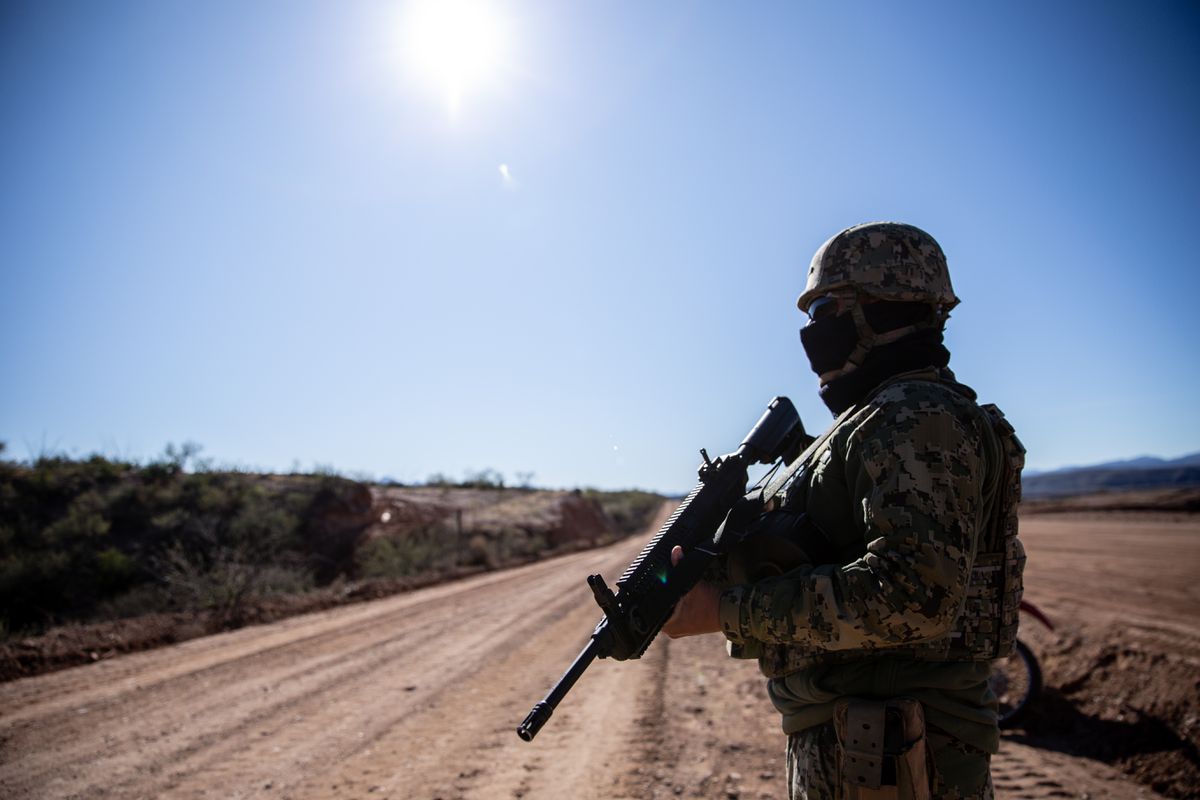 Brigadier General José Luis Ramón Velasco Guillén, who served as head of the General Directorate of the Federal Register of Firearms and Explosives Control during the administration of Felipe Calderón (2006-2012), trafficked in weapons that were donated to the Secretariat of the National Defense (Sedena). In 2012, the Inspection and Comptroller General of the Army and Air Force, the body in charge of supervising, supervising and evaluating military personnel in administrative, budgetary and operational aspects, undertook an internal investigation that uncovered that the general had improperly disposed of, at least 86 weapons that two collectors had given to Sedena. The weapons were kept in the general’s office instead of having been transferred to the Directorate of Armament and Ammunition Marketing. Later, Velasco Guillén was in charge of selling it to members of the Sedena and to another private collector who was later linked by the authorities to members of organized crime. Despite the fact that a lack of control, disorganization and negligence was detected during his tenure, the Comptroller’s Office only gave him a warning. In the Third Military Court, a criminal investigation was launched for the crime of fraud, but in August 2014 the investigation was shelved.

During the administration of General Velasco, a series of anomalies occurred that were belatedly detected by the National Defense. In a report prepared by an inspection and auditing commission of the Army, an area that depends on the Comptroller’s Office, it was stated that the heads of the different sections that made up the general direction of the Federal Register of Arms delivered documentation to permit holders without following the adequate procedure for its registration, favoring certain people and companies. In the manufacturing and marketing section, for example, extraordinary permits were issued for the acquisition of weapons, cartridges and accessories even though the applicants did not meet the required requirements. “Some petitioners claim to belong to a hunting club by presenting documents that accredit them as such, however, when verifying the reports of the clubs, it turns out that they are not members, so it is presumed that permits are issued in exchange for some gift or of a higher order” , the report reads. The military investigators mentioned a company that, despite having incurred an excessive number of irregularities during its activities, had never been fined and its permit had never been suspended or canceled. “It is presumed that those in charge of verifying its monthly reports do not report the anomalies it commits [la empresa] for having an agreement with the legal representative or for negligence ”.

In the audit ordered by the Inspection and Comptroller of the Army and Air Force it was found that in the direction under the command of General Velasco there was a lack of control over the missionaries who had been authorized a license as arms collectors. In some cases, they continued with their current permits, even though they had not covered the endorsement. “There are permit holders who have individual private licenses that have not been revalidated and have not been suspended or canceled,” the ruling stated. In the case of hunting clubs, some that had been suspended or canceled were still listed as active in the management files. It was also found that there were security companies, which provided escort services to specialized transport companies, which did not have a valid permit. Despite this, no sanction had even been applied to them and they had not been investigated or required to regulate their situation.

The Army’s inspection and auditing commission carried out a verification of the collection permit documentation in early 2012 45. In this review, it was found that General Velasco had given “wrong” orders to a subordinate to collect the weapons from a private collection that had been donated to the National Defense. After various interviews with the personnel of the general direction of the Federal Register of Arms, a series of omissions and negligent acts were discovered that had been orchestrated by the head of the direction. In his statement to the military authorities, Captain César Abel Batres Ortiz, who served as head of the arms registration section, said that on July 15, 2011, the executor of a former collector went to the general’s offices to explain that he wanted to donate 60 weapons. Right there, the general gave orders to Captain Batres Ortiz to schedule a visit to the donor’s home. The next day, he went to the collector’s house, where he verified and received the weapons from his collection. Then he transferred them in an official vehicle to the general’s private instead of taking them to the Sedena warehouses.

In August 2011, the general asked Batres Ortiz if he knew of any weapons collectors. Captain Batres introduced him to Víctor Manuel Ríos López who had been recommended to him by Gabriel Ábrego García, a former Sedena permit holder whom he had met after having supported him in some procedures. Finally, in mid-August of that year, the general and the collector met in his office, where Velasco showed him the weapons that weeks before had been donated and that were kept in his private room. “Later the aforementioned director told him that he wanted 150,000 pesos for all the weapons, so the collector told him that later he would go for them,” Batres Ortiz declared before the military authority. A few days later, Ríos López came to get the weapons and Batres helped him load them into his car. The general asked his subordinate to come to the collector’s home to collect the money from the sale of the weapons. There they gave him a white envelope with 150,000 pesos that he gave to his superior. “The general told him to take” ten “of that money, without knowing what he was referring to, but he did not take any amount and gave the envelope to the director,” reads a judicial file that was initiated after an appeal filed. by Batres.

Four months after making that transaction, Ríos López called Captain Batres again to inform him that several weapons from his collection had been stolen. It was December 2011 and he recommended that he file a complaint with the public prosecutor to protect himself from any misuse that they could make of those weapons, since they were registered in his name, according to the court documents consulted by this newspaper. When declaring before the ministerial authority the collector said that part of those weapons had been bought from a general. This raised suspicions among the authorities and they ordered a search of his home. There they found various weapons, some of which lacked registration with the National Defense. The investigation continued until it reached the high command of the general direction of the Federal Register of Arms. In May 2012, details of this case began to be released publicly. The newspaper Reform announced that the Attorney General’s Office (PGR) had arrested the collector for the crime of carrying weapons without a license and had the general and Captain Batres under investigation.

The case took a turn when in June of that year the Federal Police reported that it had arrested Gabriel Ábrego García, an arms trafficker who operated for La Resistencia, made up of the La Familia Michoacana, Millennium and Gulf cartels, according to a statement. . For months, the Prosecutor’s Office had managed to intercept Ábrego’s communications, where it discovered that among his calls there were several to Víctor Manuel Ríos López and another to Captain Batres Ortiz. As part of his investigation, the Prosecutor’s Office sent for the captain and in his statement he told about the weapons that the general had sold to the collector. The Prosecutor’s Office tried to connect the general in the plot of the sale of arms to organized crime, but was never able, according to the judicial documents consulted. The judge considered that the evidence presented by the PGR was insufficient to prove any wrongdoing. The Sedena also undertook its own investigations. An investigation was initiated against both military officers in the Military Prosecutor’s Office, but after two years the public prosecutor withdrew from the accusation and in August 2014 the file was closed due to “lack of merits to prosecute,” according to an official document provided by the Sedena to this newspaper via transparency. Administratively, the investigation continued. The Sedena was consulted by this newspaper about the status of the case of General Velasco Guillén, without the secretariat having given an answer so far.

The sale of arms between the military

The case of the collector Ríos López was not the only one where the general misused the weapons that were under his protection. On September 22, 2011, another arms collector requested the cancellation of his 321 permit that had been authorized since 1996 and requested that the weapons be placed on consignment for sale to the public. An engineer colonel was commissioned to collect the 66 weapons at the home of the man. A week later, the General Directorate of the Federal Register of Arms under General Velasco sent the 40 weapons to the General Directorate of Military Industry so that they would remain on consignment for sale to the public in the Directorate of Arms and Ammunition Marketing, the authorized instance for it. No more was known about the rest of the weapons. Later an audit discovered that they were improperly marketed with the general’s consent. In the interviews made by the inspectors of the Comptroller’s Office with a first captain, construction engineer, a clerk lieutenant and first sergeant, they said that they acquired the weapons that were stored in the general’s accommodation. “The first captain, the construction engineer, stated that he acquired two firearms from the collection through the general brigadier who is a graduate of the General Staff, paying the aforementioned general for the weapons,” the documents read. Another clerk said that the general showed her 30 weapons that he had for sale. She told her brother and he in turn tipped off a lieutenant, who eventually bought four artifacts from the collection.

In the judgment of the Comptroller’s Office against Velasco, it was concluded that he abused his position, since the direction he commanded did not have the power to sell arms, ammunition or explosives to individuals. The sale is only made through the Armament and Ammunition Marketing Directorate, dependent on the General Directorate of Military Industry, an area outside of Velasco’s interference. “The general authorized the commercialization of firearms in comment, exceeding his actions of the faculties and attributions that he held as a public servant of the General Directorate of the Federal Register of Firearms and Explosives Control, for which said public servant did not comply with the principles of efficiency, legality, honesty and loyalty ”, reads the sanction resolution.

After the analysis of the evidence and the testimonies collected, it was concluded that there was an evident administrative responsibility for the general. “The existence of the conduct in the sense of carrying out acts that implied abuse of his position and the use of the powers attributed to him for the performance of his position for a different purpose,” was noted in the file. Finally, on September 3, 2014, the Comptroller’s area of ​​responsibilities issued a sanction, which consisted of a simple reprimand, considering that the offenses could not be considered serious. At that time the general was already retired. He currently has a retirement of 77,106 pesos per month. His subordinate, Captain Batres Ortiz was never punished.