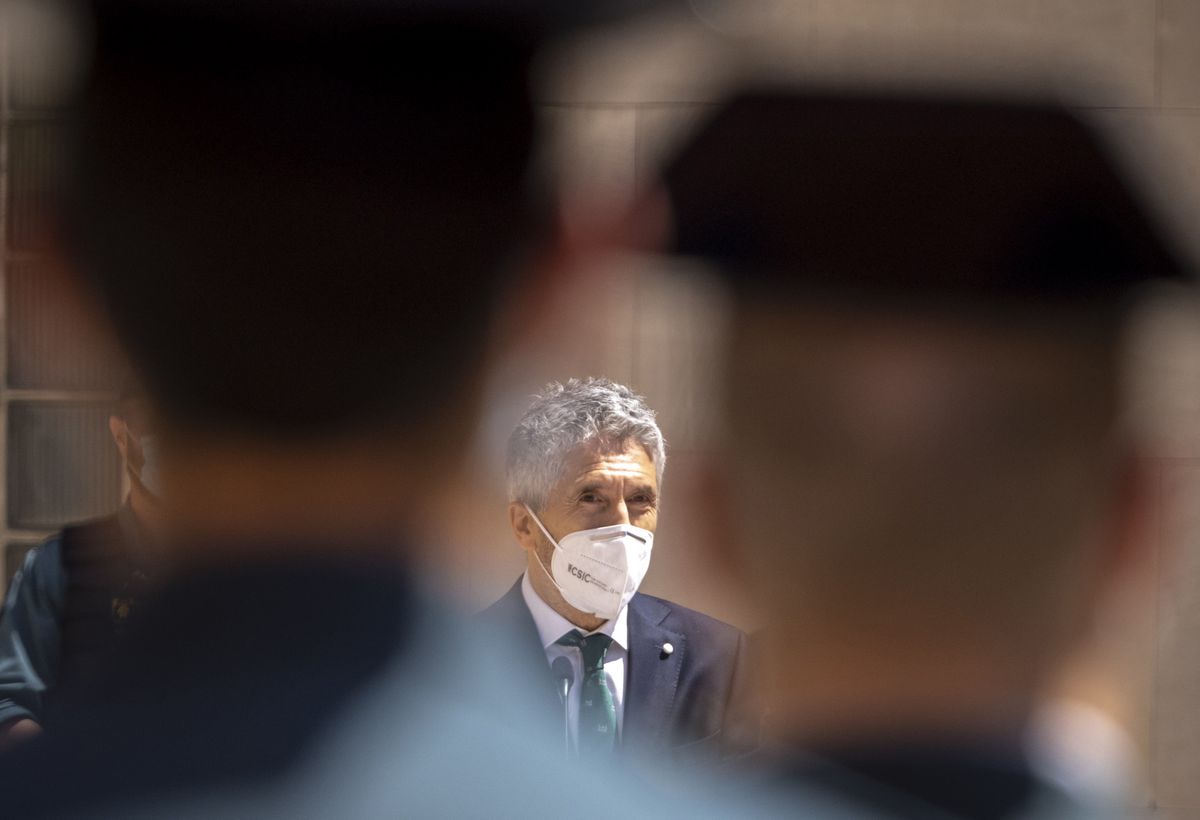 Demonstrations held spontaneously and peacefully in public places will not be penalized. Disseminate images of police officers in concentrations, if it is for informational purposes, it may not be previously punished or censored. And the body searches may not imply “partial or total nudity.” The reform of the Citizen Security Law – known as gag law– that the Government will finalize some controversial points of the norm that the PP approved in 2015, but not all. The Interior Ministry wants to keep the returns of immigrants hot, despite the opposition of United We Can, a partner of the Executive.

The parliamentary groups that guaranteed, in 2018, the inauguration of Pedro Sánchez, have been negotiating the necessary reforms for months to repeal the most controversial articles of the Citizen Security Law. The norm was approved with the absolute majority of the PP and appealed before the Constitutional Court by six parliamentary groups, among them the PSOE, IU, ERC, and UPyD. Last November, six years later, the Constitutional Court endorsed almost all the controversial aspects of the norm.

The text on which the parliamentary groups are discussing was presented by the PNV. Government partners have exchanged documents for months to try to reach a consensus on a text with guarantees of achieving the necessary majority in Congress. “The negotiations are going well,” say PSOE spokesmen. Enrique Santiago, the deputy of United We Can who defends the amendments that his group has presented to the proposal of the Basque nationalists, distrusts the Ministry of the Interior, which has already expressed its opposition to eliminating it from the gag law the rejection of undocumented immigrants at the border without legal assistance of any kind. “We,” explains Santiago, “intend that the new Organic Law of Citizen Security contemplates that the dignity of the person and human rights are the guide for police intervention.”

These are the most controversial points of the reform:

Hot returns. The Citizen Security Law established a special regime in the treatment of undocumented immigrants who enter Ceuta and Melilla, so that they can be expelled at the same border without legal assistance: “Foreigners who are detected in the border line of the territorial demarcation from Ceuta or Melilla while they try to overcome the border containment elements to cross the border irregularly, they may be rejected in order to prevent their illegal entry into Spain ”.

The Constitutional Court endorsed this measure in November based on a February 2020 ruling from the European Court of Human Rights: “States can reject the entry into their territory of foreigners, including asylum seekers who, without competing reasons, have not adjusted their conduct to these entry mechanisms, but have sought to cross the border through places other than those authorized, especially but not necessarily when, as in this case, they took advantage of their large number and the use of force ”.

And it established some conditions for rejections at the border, expressly prohibiting hot returns of certain groups: “The Security Forces and Corps must pay special attention to the categories of especially vulnerable people, among which are counted, with different projection and intensity , those who manifestly appear to be minors (especially when they are not accompanied by their relatives), to be in the situation of a pregnant woman or to be affected by serious reasons of disability, including that caused by advanced age and people in the category especially vulnerable ”. The Interior Minister, Fernando Grande-Marlaska, and the socialist group want to set these conditions imposed by the Constitutional Court, but maintaining in any case in the new text the possibility of rejections at the border.

However, Enrique Santiago defends prohibiting hot returns and promotes a legal change so that “all those immigrants who are detected on the border line while trying to overcome the containment elements, access their territorial waters or their coasts will have the right, in in any case, to formalize an application for international protection as well as to access all those legal instruments recognized in the legislation for such cases ”.

Manifestations. Both the PNV – which in its reform proposal states that the holding in places of public transit of meetings or spontaneous and peaceful demonstrations on the occasion of events or situations whose response by public opinion does not admit delay at the cost of becoming obsolete will not constitute administrative illicit. – as United We Can and the PSOE defend taking spontaneous and peaceful demonstrations out of the causes of administrative sanction. In addition, Unidas Podemos has presented another amendment where it can be read: “The lack of prior communication procedure may in no case be a cause to prevent the exercise of the right of assembly.”

Protests before Congress. Article 36.2 of the current law sanctions “the serious disturbance of citizen security that occurs on the occasion of meetings or demonstrations in front of the headquarters of the Congress of Deputies, the Senate and the legislative assemblies of the autonomous communities, even if they were not meeting ”. United We can propose to repeal this article. The agreement with the PSOE is not close at this point.

Personal identification. The parliamentary groups of the majority of the investiture agree to reduce the retention time of a person for identification of the maximum of six hours that the law now indicates to two.

Body searches. The PSOE and United We can agree to establish an express prohibition in the reform: “The external and superficial body search of the person may be carried out, which in no case may involve the partial or total nudity of the person.”

Drugs on the public highway. United We can have presented an amendment, which does not have the support of the PSOE at the moment, to eliminate the sanction provided for “the illegal consumption or possession of toxic drugs, narcotic drugs or psychotropic substances, even if they were not intended for trafficking, in places, roads, public establishments or collective transport ”.

Police recordings. The law sanctions “the unauthorized use of images or personal or professional data of authorities or members of the Security Forces and Bodies that may endanger the personal or family safety of the agents.” The Constitutional Court considered that the term “unauthorized” incorporated a previous caesura that it considered unconstitutional. Both the PSOE and United We can support a reform of this precept to eliminate any possibility of sanction for using images of members of the Security Forces for informational purposes.

The million-fine rule and the ‘kick in the door’

In April 2020, during the first state of alarm due to the coronavirus, the Minister of the Interior, Fernando Grande-Marlaska, maintained in Congress the commitment of the Government and the PSOE to repeal the gag law, although then he already clarified that there were precepts “that will always have to be in the next law”, referring to article 36.6, the one applied to fine for serious misconduct – from 601 euros to 30,000 – those who then circumvented the mobility restrictions. During the three months of that confinement, the Security Forces proposed 1.1 million fines and made more than 9,000 arrests in application of this article.

The police also wielded the Citizen Security Law to enter without a court order, last April, a Madrid apartment where an illegal party was being held. In order to knock down the door of the house, the policemen relied on articles 9.13 and 16.1 of this rule, which authorizes the agents to identify people when there are indications that they have committed an offense and forces them to identify themselves; as well as article 16.5 of the same law, which states that if they do not do the latter, they could incur a crime of serious disobedience “that would make their arrest possible.” Legal experts then rejected that these articles protected the actions of the agents, who recalled “the kick in the door” that another law, that of Minister José Luis Corcuera, collected 30 years earlier, and which was declared unconstitutional.

In his last report, last May, the Ombudsman highlighted the numerous complaints presented by “the way in which the Security Forces” used during the confinement of the gag law “As a sanctioning tool.” The institution emphasized its “critical position on the suitability” of this rule, considering that it was not designed to address the situation posed by the coronavirus. The report highlighted that this law “could entail the payment of exorbitant fines to people who, in addition, had lost their jobs or drastically reduced their income as a result of the devastating economic effects of the pandemic.” The Ombudsman also denounced that a single article, 36.6, was used to punish “all conduct contrary to the provisions of the royal decree that decreed the state of alarm and its various extensions.”

For all this, the institution insisted on requesting, as it had done in previous annual reports, the reform “of those articles that have caused the most protests and discrepancies in civil society.” And it cited articles 20.2, 37 and 36.23, referring to body searches, the rights of assembly and demonstration, and of expression and information. /OR. LÓPEZ-FONSECA