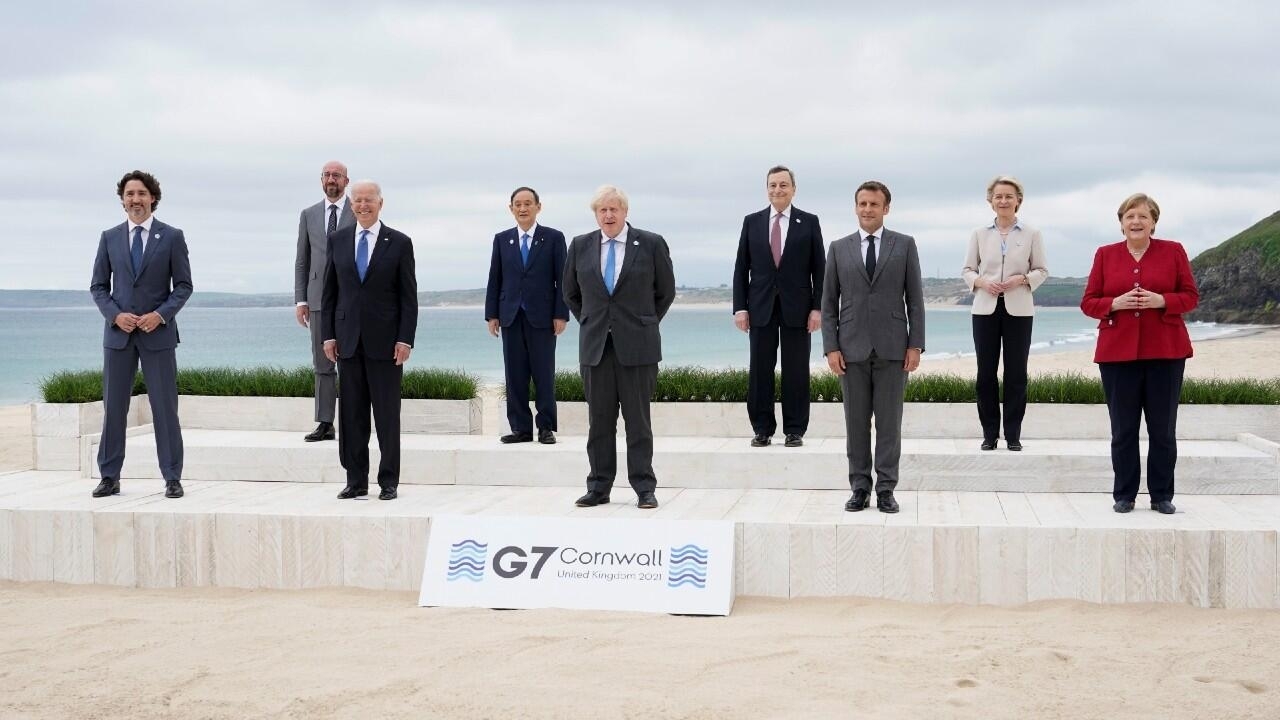 After more than a year of Covid-19, it is the first time that the leaders of the group meet in person. The three-day event will address multiple topics, with vaccines and economic recovery being the central concerns, along with the interest of a “cleaner and greener world.” Boris Johnson’s welcoming remarks also denote a change in leadership, while Joe Biden seeks to regain lost trust with Donald Trump.

The summit of the G7 – or Group of Seven – that brings together the heads of State and Government of Germany, Italy, France, the United States, Canada, Japan and the United Kingdom began this Friday in Cornwall, in the southwest of the country.

This year’s event, which will run until Sunday, June 13, is urged to coordinate the support and distribution of vaccines throughout the world, especially for the poorest countries.

In this sense, British Prime Minister Boris Johnson, in charge of inaugurating the summit, said that his G7 meeting was an opportunity to learn the lessons of the pandemic and make sure not to repeat the mistakes made during it in the future.

One of the key figures of what will be this summit is precisely Biden, after four isolationist years from his predecessor Donald Trump. In his first international trip as president, Biden is firmly committed to multilateralism and, under a friendly message, promised that “America is back,” calling for alliance to the leaders of some of the world’s largest economies.

Another mission will be to find common responses to crises such as climate change and post-pandemic economic recovery. For this, there will be bilateral meetings between the leaders, although from the beginning the British ‘premier’ appealed for “a cleaner and greener world” and the creation of “many millions of high-wage jobs.”

For the time being, those of the G7 will commit to share with the world at least 1 billion vaccines to advance global immunization, according to the words of Boris Johnson. Half of the doses will be donated by the United States, while the United Kingdom will deliver 100 million more.

Since Thursday, both Biden and Johnson have been preparing the ground for the summit, laying the groundwork for a global inoculation campaign and urging their allies to come together to accelerate the end of the pandemic, but also to reinforce the group’s strategic position. on the plane of global geopolitics.

“We are going to help lead the world out of this pandemic by working with our global partners,” said Biden, noting that the rest of the leaders would join Washington to commit to donating vaccines and fighting the virus, especially in the nations that need it most.

“At the G7 summit, I hope that my fellow leaders will make similar promises so that, together, we can vaccinate the world until the end of next year and thus recover better after the coronavirus,” Johnson said.

The United States plans to donate 500 million doses of the Pfizer vaccine for distribution through the Covax alliance to 92 countries currently suffering the impact of the pandemic and the African Union, in what constitutes the first constant supply of messenger RNA (mRNA) against the Covid-19.

For his part, French President Emmanuel Macron celebrated the American commitment and declared that Europe should do the same, noting that his country will distribute at least 30 million doses worldwide, before the end of the year.

On Thursday, Macron stressed that time is key since “it is almost more important to say how many (doses) we will deliver next month than to make promises to fulfill within 18 months”: “It seems to me that the European Union needs to have at least the same level of ambition than the United States. “

The G7 countries have been facing increasing pressure from the demands that have arisen from the different vaccination campaigns in the world, especially due to the inequality that has become evident in the face of excess in countries like the United States and lack in regions such as America. America and Africa.

That is why some campaign groups criticized the plan as a drop in the ocean, while, according to the international organization Oxfam, it is estimated that almost 4 billion people will depend on vaccines from Covax, which is the program that distributes the inoculations. to low- and middle-income countries.

Since the G7 last met two years ago, the pandemic has killed more than 3.7 million people, leaving unprecedented economic and social damage in its wake.

The return of the United States to the G7 alliance

Since the political and social crisis developed in the framework of the last presidential elections, and the record of the controversial President Trump, the new international scenario of the United States takes place at the top.

In 2017, the president shocked Washington’s western allies during his first trip to Europe, scolding them for not paying their “fair share” on defense, physically shoving a prime minister and gritting another leader’s teeth. in a handshake. Which seeded a tumultuous four-year relationship with the president and the other G7 members.

With Biden, the scene was different from minute one. Especially after his interest in renewing his deal and his commitment to partners, which has been well received by his counterparts.

In contrast to Trump, some analysts see in Biden the possibility of renewal, in the sense of a relationship based on the democratic values ​​shared by the G7 leaders. While Trump did not understand the concept of multilateralism, strategic alliance or agreements of mutual interest, to the point of seeing them as a conspiracy against the power of the United States that cooled alliances.

Yet according to Harry Broadman, a former senior US official and director of the Berkeley Research Group who spoke to Reuters, “America’s partners are still reeling from what happened under Trump.”

Biden arrives at the summit with a clear message, “the global effort against Covid-19.” And while some analysts consider the reliability of the United States as a partner remains in doubt, 12 European and Asian countries continue to view the nation as a “somewhat reliable” partner, according to a survey by the Pew Research Center.