The fresco art of the botijos 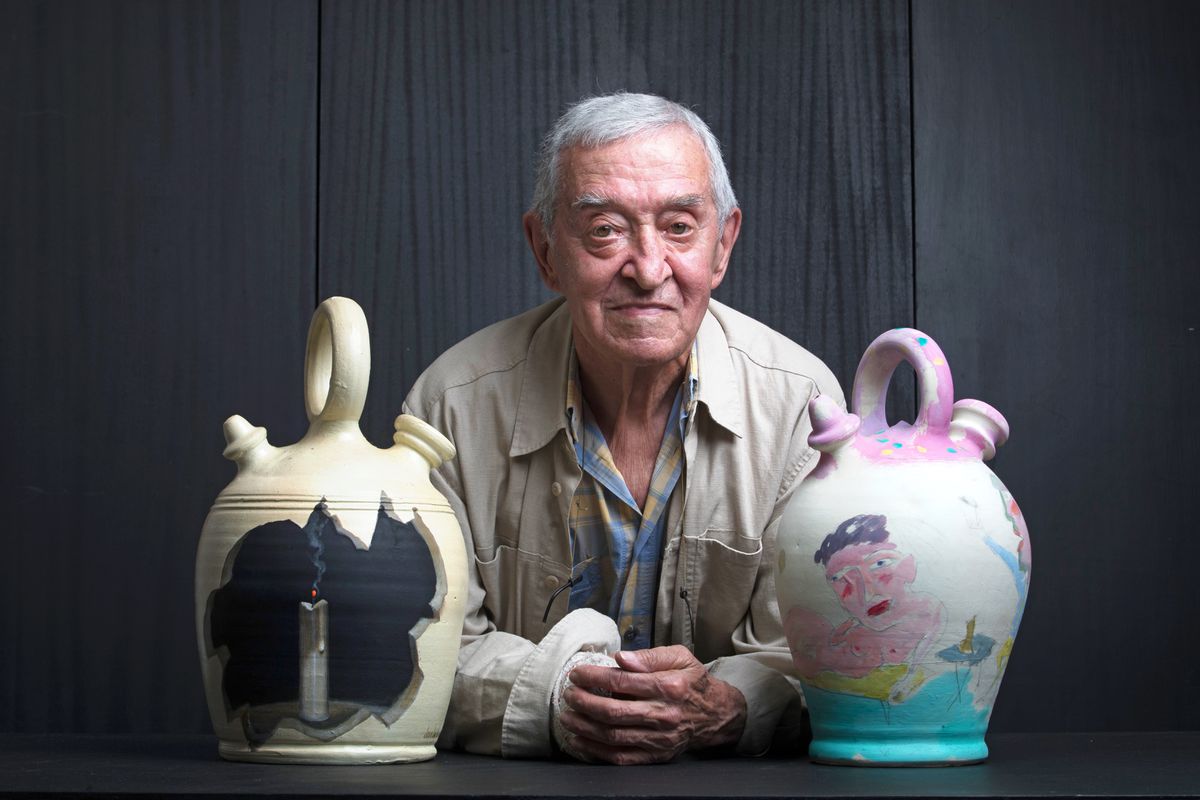 The mechanism of a jug is not so simple when drawing on its plump figure. The artists’ brushes, markers and other utensils have had to adapt to this traditional clay container, which has gone from refreshing thirsty generations to supporting paintings by artists such as Dalí, Forges or Canogar. The person in charge of this change of function is called Ismael Peña, he is 85 years old and has been collecting traditional ceramics and pottery for decades. This man from Segovia has a collection of about 100 pieces painted “al fresco” that combine “the popular art of clay” with the “cultured art of painters”. His old friend Salvador Dalí gladly agreed, not without some surprise, to decorate one of the 40 jugs that will be exhibited in the courtyard of the Segovia Provincial Council starting tomorrow. The sample is called The skin of the water and Peña trusts that this old article, historically present in houses, bullrings or soccer fields, awakens the nostalgia of the public.

“I think everyone has seen a jug in their life,” appreciates this multidisciplinary octogenarian who also expands the functions of the jug that sings or composes. “This way I stay more alive”, presumes the one who was a friend of Salvador Dalí. The emblem of surrealism affectionately called him “minstrel” and thus wanted to honor him on clay: the Catalan painter drew a minstrel playing with the lines of the signatures of both.

The life of Ismael Peñas is a museum

“I asked the painters to do whatever they wanted,” Peña recounted by phone from his home in Madrid. The chirping of some birds mixes with his proud voice as he explains how well received his proposal was. Now, if the only slogan he gave to the artists was freedom, the chosen material is not as stable and invariable as canvases or marble: clay has life and must be taken into account before getting down to business.

The best clay to work on, the botijero details, is white. Everything is due to the transpiration capacity of clay, something that has been studied by potters for centuries. Red mud was used for winter jugs, as it breathes less and prevents the water from cooling as much as in white, much more porous and more suitable for summer. The particularities of the clay affected the cartoonist Forges, who decorated one with a marker but the clay absorbed the ink and had to change his technique. The variety of styles is present throughout the collection: the sculptor Santiago de Santiago decided to prepare a piece himself and design it in his own oven. Rafael Canogar he drew three faces on the plump stand to be enjoyed from any perspective. “Others have broken the handles … And it still works!” Proclaims, admired, Peña, because the container can also be grasped with both hands and continue to hydrate the staff.

The person in charge of the exhibition intends to surpass previous records, such as that of the 25,000 attendees to an exhibition that he already organized with the clay pots in Burgos in 2019, and continue to pay homage to an ally “humble, simple and as surrendered and submissive as a dog, always at the foot of his master and at the hand of his master ”. The freshness that springs from its orifice has inspired the imaginative capacity of the artists located to personalize the jugs: there are references to Castilla, the fauns, Machado, nature … and religious or erotic motifs, such as that of Juliette Schlunke, highly valued by Ismael Peña. He himself has decorated one of the pieces: an Extremaduran jug without a handle on which he has captured motifs taken from Greek mythology. In the first years that he began to collect them, Peña collected any jug that came his way, but he became more selective and observing the characteristics of each vessel with more care. This modern minstrel believes that plastic, jerrycans and cans have not erased this clay companion from the collective imagination. Just in case, he hopes that the stylistic variety of his collection will prove his theory in the face of profane pottery: “Each jug is a world.”