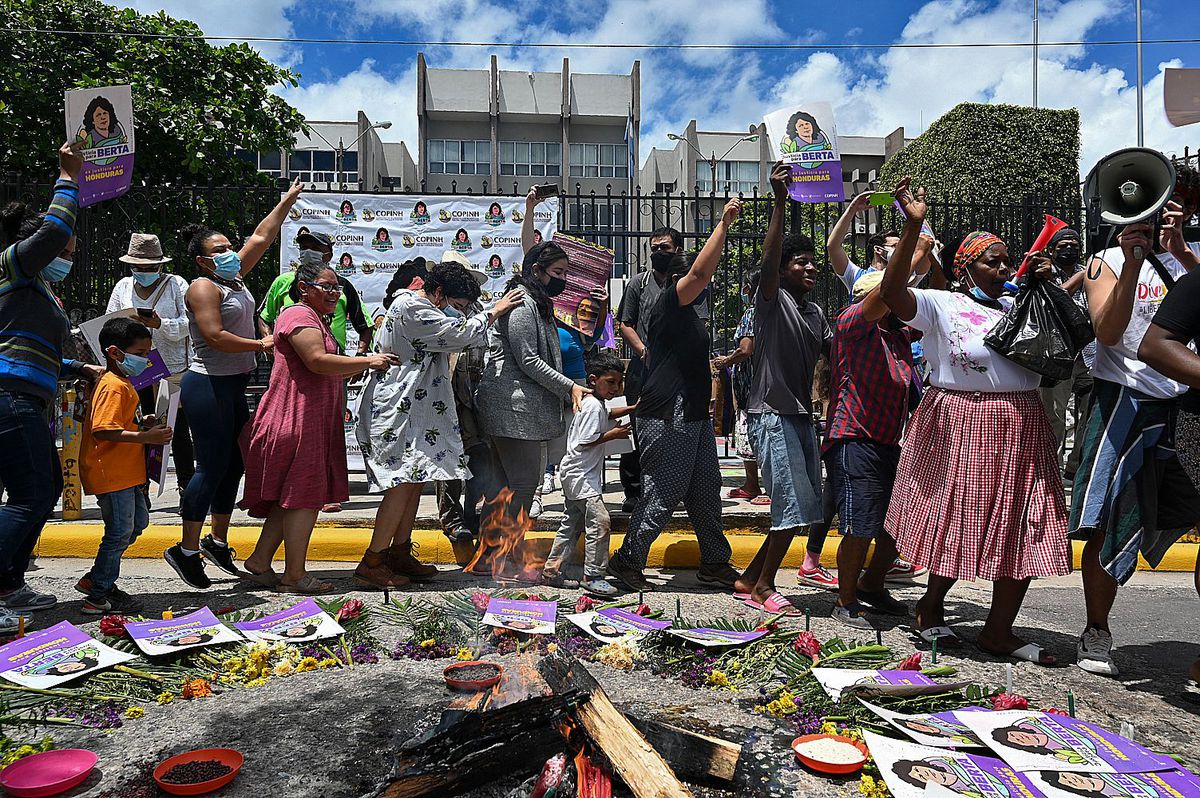 With shouts of “Berta did not die, Berta made millions”, dozens of indigenous people and Berta Cáceres supporters celebrated the conviction of David Castillo Mejía as co-author of the murder of the environmentalist in March of Honduras at the doors of the Supreme Court of Justice of Honduras. 2016.

The seven sentences known so far for his murder escalated this Monday a little more by pointing directly to the DESA company, in charge of the construction of the hydroelectric plant, and its manager, although the sentence imposed will be known on August 3, the court announced .

David Castillo, former executive president of the company Desarrollos Energéticos SA (DESA), was arrested in March 2018 at the San Pedro Sula Airport, when he was trying to leave Honduras. Castillo was a former intelligence officer of the Honduran Army trained in the United States and presided over the DESA hydroelectric plant that promoted the construction in the territory of the Lenca ethnic group of the Agua Zarca dam, which Cáceres opposed on the grounds that it caused damage to the environment. The court concluded that Cáceres was killed for leading the campaign to stop construction of the dam, which led to delays and financial losses for the company.

Until now, seven people have been sentenced for being the material actors, but this time a senior executive is included. The court took into account the messages and calls that David Castillo exchanged with both the hitmen and the company executives before, during and after the activist’s murder. The conversations show that Castillo was clearly defining the plans, logistics and payment of the crime, the court ruled.

Castillo had defended himself on the grounds that he was a friend of Cáceres, but the court concluded that Castillo maintained this contact only to obtain information about his whereabouts and movements. According to the ruling, Castillo is a “co-author” of the murder, which encourages activists to persecute the Atala Sabla family, owner of DESA, whom they consider guilty of being at the forefront of the “criminal structure that directed the murder.”

His daughter Berta Zúñiga Cáceres valued this Monday’s sentence as a “popular victory and a step to curb impunity,” he said at the court’s gates. According to his daughter, “the ruling means that the power structures failed to corrupt justice” and he announced that “the case does not end with this resolution but is on the way to bring the Atala family to justice.” Upon hearing the sentence, Berta Zúñiga insisted on one of the indigenous demands: “the cancellation of the construction of the hydroelectric plant as well as dismantling the criminal networks that have been exposed during Castillo’s trial.”

In the same direction, the Civic Council of Popular and Indigenous Organizations of Honduras (COPINH), the NGO led by Berta Cáceres, insisted that the conviction against Castillo “must be the beginning of the process to try the people involved in the crime.”

For the Cáceres family lawyer, the sentence “represents an important victory since it was possible to reconstruct the murder, identify the culprits, evidence them and bring them to justice,” said his lawyer Victor Fernández. “The demand for justice is not only for Berta Cáceres but for the death of countless activists killed by this extractive economic and social model that has been dividing the country for years,” added the lawyer, for whom this sentence “breaks with the spiral of normalized violence ”. So far, more than five years after the murder, no member of the board of directors or of the Atala family has been charged or has had to testify.

In 2017, DESA sent a message to this newspaper in which it stated that it was “completely unrelated.” The Honduran Prosecutor’s Office, however, stated in its 2018 indictment that Castillo, then DESA’s executive president, asked the company’s head of security, retired military officer Douglas Bustillo, to organize the murder. Bustillo turned to an old friend from the Army, Major Mariano Díaz Chávez, an instructor in the Military Police and a member of the Special Forces, to hire some hitmen. They were paid up to 2,200 dollars (1,986 euros) to commit the crime, according to the Prosecutor’s Office. Both Bustillo and Díaz Chávez were sentenced to 30 years in prison in 2019.

Led by Berta Cáceres, the Lenca indigenous people had opposed the construction of the Agua Zarca dam, a hydroelectric project that would affect the Gualcarque River, an important source of resources for Honduran indigenous communities. Cáceres mobilized the indigenous people, denounced the project and attracted international attention. For his environmental struggle he was awarded the Goldman Enviromental Prize, the most prestigious award in this field. His daughter Berta insists that DESA executives gave their consent to her mother’s murder.