The forgotten women of Malvinas: ‘We were also there’, say the nurses 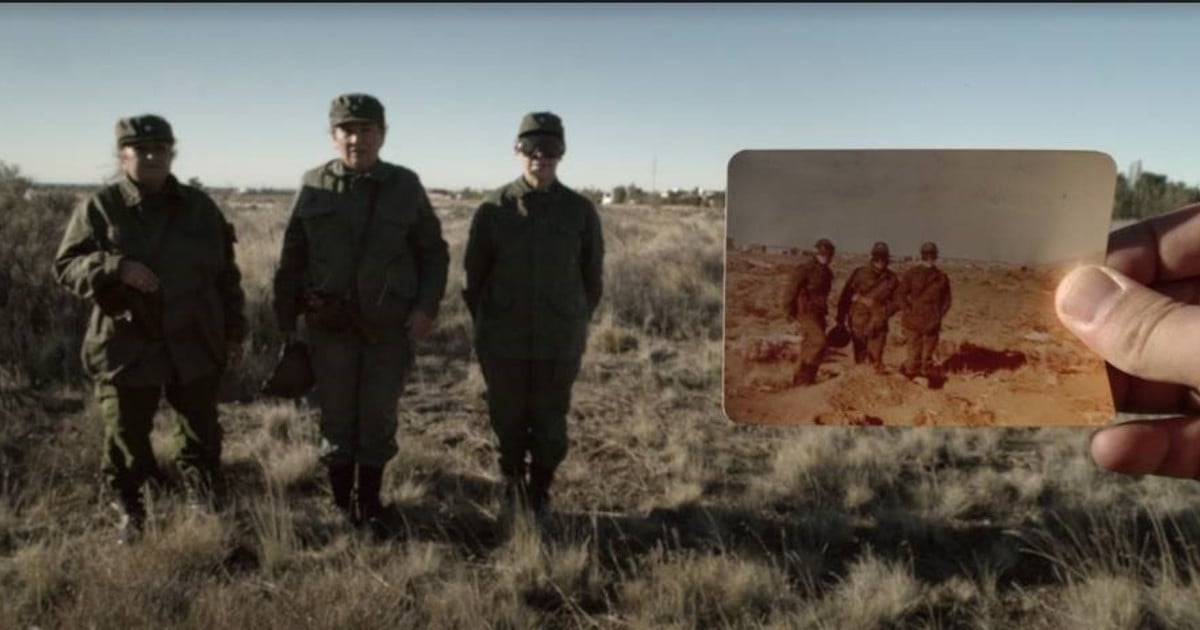 During the Malvinas war 649 Argentine soldiers died and more than a thousand were wounded. Many of them were cared for by 14 Air Force nurses in a mobile hospital located in Comodoro Rivadavia. After almost four decades of silence, three of them, Alicia Reynoso, Stella Morales and Ana Masitto, returned to the place to tell their stories.

The three women walk through the still hostile field. They wear a uniform, walking boots, and a hat. They remember the shelter, the cold they passed, the fear that they pushed away with prayers, the loneliness of the dark, the sirens announcing an attack. Recreate old photos. They laugh, they cry, they get excited.

Before and now, in the same place.

Alicia, Ana and Stella filmed by director Federico Strifezzo, who traveled with them to the real locations where they lived those days

On Thursday, April 1, 39 years after the start of the Malvinas War, it opens “We were also”, a documentary directed by Federico Strifezzo, and which stars three of the 14 nurses who participated in the South Atlantic Conflict in the Relocatable Hospital of Comodoro Rivadavia.

“For me war was a men’s issue, especially in relation to Malvinas -said the director-. Through Alicia I reached out to other nurses, each with her own injuries. But if there was something they shared it was the pain of silence and oblivion to which they had been condemned after 82. I accompanied them for a time in their struggle, filming them at marches, events, and parades. And so the desire arose to shape a film that would serve to unearth memories and put into images what for so many reasons was not wanted to show. “

In 1982 Alicia Reynoso, Stella Maris Morales and Ana Masitto were young nurses who they were just beginning their careers, the first class of a Air Force for other manly. On April 2, when the conflict broke out, they were notified that they would be sent to Comodoro Rivadavia to receive and care for wounded combatants in a hospital that would be set up next to the airport runway.

Stella Alicia and Ana were part of the group of the first nurses who arrived in Comodoro Rivadavia in 1982.

They arrived before the hospital. They slept for a few days in the brigade, in bunk beds, then they would sleep on intensive care stretchers, always with his fagina clothes, always ready to go. They were aeronautical NCOs, they were between 21 and 26 years old and came from all over the country. They were the two months that the war lasted.

The television spoke of the “brave soldiers”, the “men of the country”, “our boys”. Only once were they allowed to speak to some journalists. The magazines of then wrote “women’s perfume”, “lipsticks”, and about her “dreams” of having husbands, children and starting families.

None of the 14 nurses were officially recognized as war veterans. No one collects the pension as male veterans of Malvinas charge.

The three women today, friends, rereading notes made to them during the war: “They only asked us if we were going to get married and have children.”

They had to wait for the planes with wounded soldiers to arrive. They brought them 30, 40. They treated bullets, splinters, exposed fractures, “trench” feet (frozen by water, cold and humidity). Also crying, screaming, wailing, pleading.

“I was a nurse, I was used to injuries. What I couldn’t bear were the crying of those boys, they were children in the war who asked for their mother, they wanted to go with their mother, their soul ached “, Alicia tells Clarion.

-The tears are saved because here what you have to show is strength! The captain ordered them to they had to hold back until they could be left alone. The same captain who on television spoke of the courage of the soldiers who were proud to fight.

“It wasn’t what you saw on the news,” the women say in the documentary, which shows them crying, embracing: “Now we can take the pain out of oblivion, the anguish …, I blocked everything, I didn’t tell anyone, just fifteen years ago I was able to speak … I didn’t tell anyone either. “

The nurses say they suffered traumas after the war not only because of what they experienced but because they were forbidden to speak.

“We had been ordered not to talk about what we experienced. I did not erase it. It was always in my memory,” Alicia tells Clarion. She what then I was 24 years oldHe tried to commit suicide some time later. A friend took her to the Psychoanalysis Association in 2008. “I was able to get it out, throw it up. It did me very well. But when I shared notes and some thoughts on social networks began to attack me, to attack me, they threatened me so that I would not continue speaking. ”

-Militaries, civilians, men, women. Here half the story has been told, and there are many people who still do not want the truth to be known. We were denied twice, as far as we knew, and because we were women. Here there is a debt of honor and loyalty to the genre. The Military is a very macho environment, and war seems to be a man’s thing. But the debt is also with the boys who fought, many died in neglect. There were more deaths from suicides than in the war itself.

First class of the Air Force. They ask to be recognized as war veterans and collect the pension like men

Alicia is 65 years old, she continues to work as a nurse in a health center in Paraná. He has two daughters, two granddaughters and a medal that says a war veteran that he was given in 1991. The pension is not paid. The trial began in 2008, in 2017 he won in the first instance, the outcome is still awaiting.

Stella was 27 when she came to Comodoro from Villa María, Córdoba. Now she is 66, she is retired. PHe said the discharge from the air force shortly after the war ended: “I got tired of being abused. The war did me a lot of harm, so much silence. They didn’t want us to talk. We came back and they wanted us to pretend nothing had happened. It was a blockade. For years I couldn’t tell anyone,” he says to Clarion.

It was only when Alicia contacted her in 2014 that the words came out, along with the companions. Between all they uncovered the memory, “Feminism helped us. Times are changing, women were always relegated and now we are being allowed to speak. We must fight for who we are, we don’t have to be one step behind. the military has always been bothered by women, They still don’t recognize that there were women in the war. ”Stella doesn’t collect her pension either.

Return to the South. The film opens on April 1.

Ana was 22 years old in the war. “Seeing those planes arrive with those injured boys … it affected us a lot, We were young, and we also missed … And when it was over they forbade us to speak, only ten years ago I was able to tell it.

“We were also there” premieres on April 1 at 20 in Cine.arTV and on the platform Cine.ar Play. On Friday 2 at 22 it can be seen in Encounter Channel and in the Public TV It can be seen on the 2nd at 10:30 p.m. On Sunday 11 at 19, it will be screened at the Auditorium Theater in Mar del Plata. There will be the director and the protagonists. The entrance will be free and free.

Hilary Duff announces the birth of her third baby: "We love you"

Trump bursts into wedding – and talks about China and Biden: “Worse than talk of the drunk uncle”