The Football Association and “Etisalat” renew the “partnership” 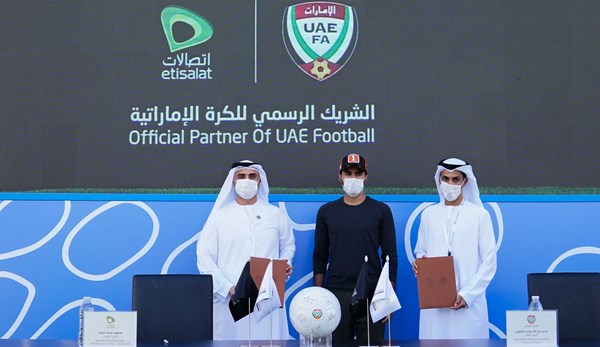 The Football Association and the Emirates Telecommunications Corporation “Etisalat” signed the contract to renew the official partnership between the two parties, in the presence of Sheikh Rashid bin Humaid Al Nuaimi, President of the Federation, and Masoud Mahmoud, CEO of “Emirates Telecom”.
The signing ceremony took place at the Sports Center at the “Expo 2020 Dubai” site, on the sidelines of the exhibition match organized by the Football Association, with the participation of a number of world football stars, as it was signed by the Football Association, Muhammad Abdullah Hazam Al Dhaheri, Secretary General of the Federation, and Masoud Mahmoud.
This renewal between the Football Association and Etisalat constitutes a continuation of one of the most successful partnerships in Emirati and regional sports, as the partnership of the Football Association with “Etisalat” enters its thirteenth year between two of the most important national institutions leading in their fields.
The renewal of the partnership comes as part of the two parties’ efforts to play their role in serving Emirati football, as it moves towards the future with the launch of “Vision 2038”, which places among its priorities the activation of the strategic partnerships of the Federation with various national institutions and sectors.
Sheikh Rashid bin Humaid Al Nuaimi, President of the Federation, praised the great support provided by “Etisalat” to local sports in general, and football in particular, stressing that the Emirati football is reaping the fruits of this generous support and employing it to develop various football competitions and prepare the national teams, extending his sincere thanks to the management of “Etisalat.” » For its continuous sponsorship of the popular game, its elements and competitions.
He said: The Football Association is proud to renew the partnership with “Etisalat”, the giant company that plays its national role and takes its social responsibility seriously by providing great support to sports youth.
Sheikh Rashid bin Humaid Al Nuaimi indicated that Etisalat is a strategic partner for Emirati football, and it has clear fingerprints in every achievement achieved by Emirati football in previous periods, and in every progress and development that national teams and local competitions will achieve in the future, expressing his happiness at renewing the partnership with Etisalat. Known for its great and continuous national achievements, and its role in community service.
He added: Emirati football will be the first beneficiary of the renewal of the partnership with Etisalat, noting that the partnership will provide additional support for the Football Association’s 2038 vision, through which we seek to develop, achieve achievements and raise the flag of the state in various football forums.
Masoud Mahmoud said: The partnership that binds us with the Football Association is a strategy that extends over many years and stems from a sense of patriotism in which Etisalat is committed to supporting sports activities and promoting a healthy lifestyle for all members of society. The components of a healthy life, and our presence as a partner of the Football Association is part of Etisalat’s strategy to consolidate its presence in support of the most prominent major events, events and initiatives held in the country and to complete the development process of renaissance that stems from building the human health and knowledge.
Mohammed Abdullah Hazam Al Dhaheri valued Etisalat’s support for Emirati sports, and praised its continuous contributions and support to the local football family, stressing that this support will bring positive results and contribute to development and achieving the desired goals in the future.
He said, “Etisalat has been and continues to be a pioneer in providing the best care for local football in all its departments, including competitions and national teams, and it is an integral part of Emirati sport.”
He pointed out that the support provided by this large national company had a clear role in the development of many football fields, most notably the local football competitions.
Bin Hazam expressed his happiness at renewing the partnership with Etisalat, stressing its importance at this time, when the Football Association is working to implement its strategy and vision 2038. He reiterated his thanks to the company’s management and its elements, wishing Etisalat more success and success.

On the edge of the precipice, truck driver blames the navigator | FormulaPassion.it

Clarissa Selassié, flirt with Gianmaria? She sets the record straight