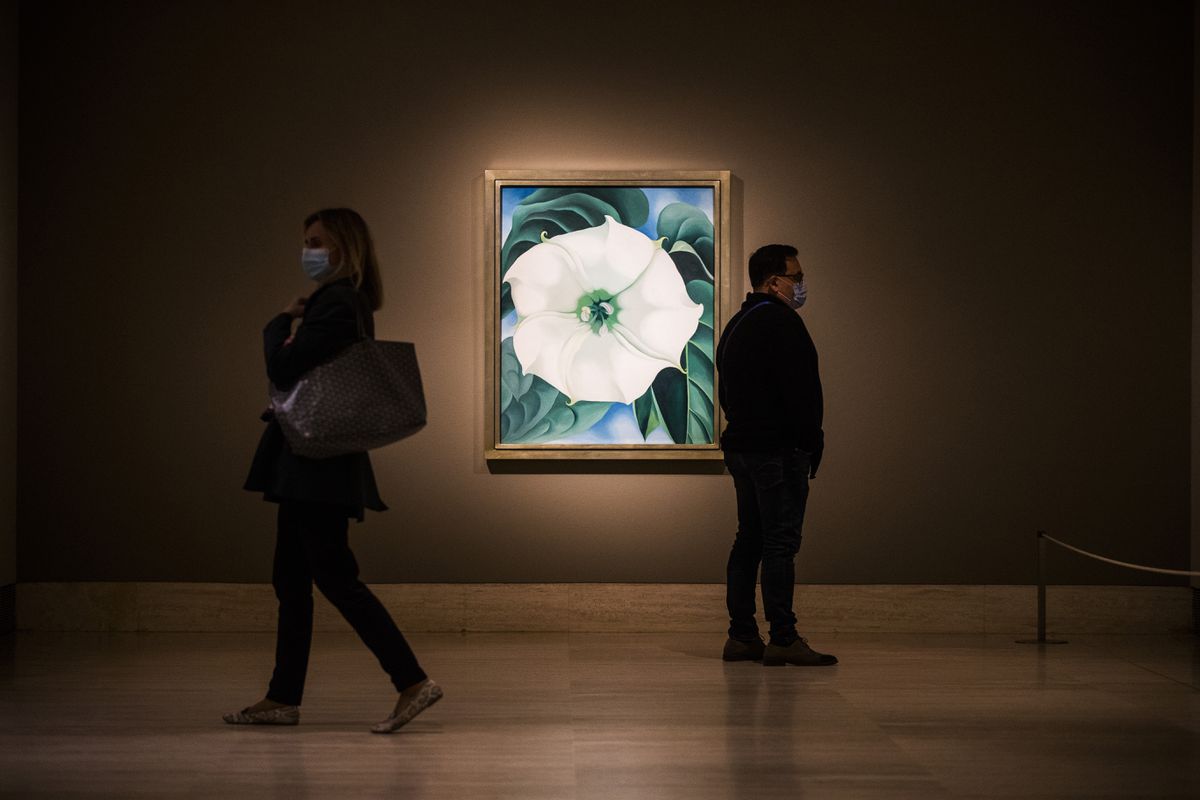 The Jimson weed flower is small and hallucinogenic. Its dazzling whiteness and freshness last no more than a few hours. Then it withers and only its venom survives. When Georgia O’Keeffe (Sun Prairie, 1887-Santa Fe, 1986) painted Stramonium. White flower (1932), she did so fascinated by its beauty, but was unaware of the malice of the plant that grew wild on her New Mexico farm. Nor could she know then that that painting would make her in 2014 the most sought-after woman artist after being awarded in Sotheby’s for 35.4 million euros. The work presides over the central room of the anthology that the Thyssen-Bornemisza museum dedicates to the American artist until August 8. For the first time in Spain, it will be possible to see 90 works that cover six decades of uninterrupted activity, from his youth to the eve of his death, at 98 years old. The exhibition will then travel to the Pompidou Museum (Paris) and to the Beyeler Foundation (Basel), co-producers of the project.

This exhibition, one of the most powerful of the year, began to be conceived at the beginning of 2000. And it is part of the almost heroic exhibitions carried out in Spain during this long year of pandemic. Evelio Acevedo, Managing Director of the Thyssen, explained during the presentation that there are few O’Keeffe paintings in public collections in Europe. The museum itself is lucky enough to add five canvases, but the bulk of the loans have come from the United States; 35 of them, from Georgia O’Keeffe Museum from Santa Fe, the capital of New Mexico, the state where the artist lived most of her life. “We had a moment of panic because it was very difficult to coordinate with museums that were closed due to the pandemic,” the manager details, “but the collaboration between all the museums in the world is being exemplary. They have allowed us not to work with postal mail and to follow up online the journey of the works, so that in the end, together, we have made the miracle possible ”.

Marta Ruiz del Árbol, head of the Modern Painting area of ​​the museum, has organized the exhibition mixing chronological and thematic order. The expert has wanted to transcend the myth and its best known aspect, dedicated to flowers of sensual significance. “Since the mid-1920s,” says Del Arbol, “O’Keeffe was widely recognized as one of the founders of American modernism. She was the first painter to obtain such recognition alongside her male contemporaries. In 1946, she became the first woman to star in a retrospective at the MoMA for his innovative vision of art, based on dramatic urban landscapes and audacious desert landscapes without human presences. Her work is an inspiration guide for many artists after her, such as Judy Chicago, Yayoi Kusama, Lucy stein or Elisabeth Peyton ”.

The daughter of a Wisconsin farming family and the second of seven siblings, she studied at the Art Institute of Chicago and the Art Students League of New York. In 1915 she began to draw abstract charcoal compositions that made her one of the pioneering American artists to explore abstraction. These drawings were shown to the powerful art dealer, photographer and gallery owner Alfred Stieglitz, who was the first to exhibit her work and only a year later, in 1916, became her husband.

Between stamens, pistils, shells, skulls and pelvis, Georgia O’Keeffe’s work is a gigantic walk through nature. “She is a walker who likes to walk the places she visits,” says the curator. “Both when she travels the American landscapes and when, from 1953, she decides to travel the world (she was in Spain twice), she is a stroller who looks at what she has before her eyes, takes a note and carries objects in your bag. Later, in the studio, he works on the work. If I had to define her in any way, I would say that she is the painter of nature par excellence. Even when he portrays New York buildings, he gives prominence to the piece of sky that sneaks between the buildings. “

Cody Hartley, director of the Georgia O’Keeffe museum, intervened in the videoconference presentation to highlight the genuinely American character of O’Keeffe’s work. “From his hand we discovered the United States, the vastness and harshness of the North American landscape, from the plains and canyons of Texas to the urban landscapes, in which he captured the rapid transformation of Manhattan into the city of skyscrapers. His works also allow us to contemplate the famous storms of Lake George, in the State of New York, or the spectacular geological formations of the American Southwest. “

The final part of the exhibition is dedicated to the series of paintings inspired by the views from the window of the plane in which he was traveling. “They are images obtained from a bird’s eye view,” explains the curator, in which we see paths of clouds that trace whimsical shapes. “Later transferred to the painting, they seem like abstractions, but they are formal representations of the views that she has kept in her memory.”

Absence of the muse

Everyone knows about Georgia O’Keeffe her ambiguous flower paintings and her sophisticated image. Tall, bony, and angular, her appeal exceeded conventional beauty. From a very young age, she opted for wide and geometric garments that, without being tight, highlighted her stylized figure. Her wardrobe was stocked with tunics, flowing shirt dresses, two-piece suits, and smocks that she walked around in model style.
She was portrayed both naked and dressed by numerous photographers of the time such as Paul Strand or her own husband, Alfred Stieglitz. He always appears with his chin up challenging the camera. Its strong image inspired the designs of other artists. Alexander Calder himself created a spiral brooch in her honor, as if it were Greta Garbo herself. In the days of social media, it would also have swept his image.
Its powerful aesthetics greatly contributed to the creation of its myth, an aspect that has been expressly excluded in the exhibition at the wish of the curator. “We have only included a copy of the famous image in which it appears cloaked with a large cape. We were interested in highlighting her importance as a painter. The rest is another world ”.

The Government created a new method to control meat exports

Xbox internal analysis of the Last of Us Part 2 revealed

The West described scenarios for Russia in response to US sanctions