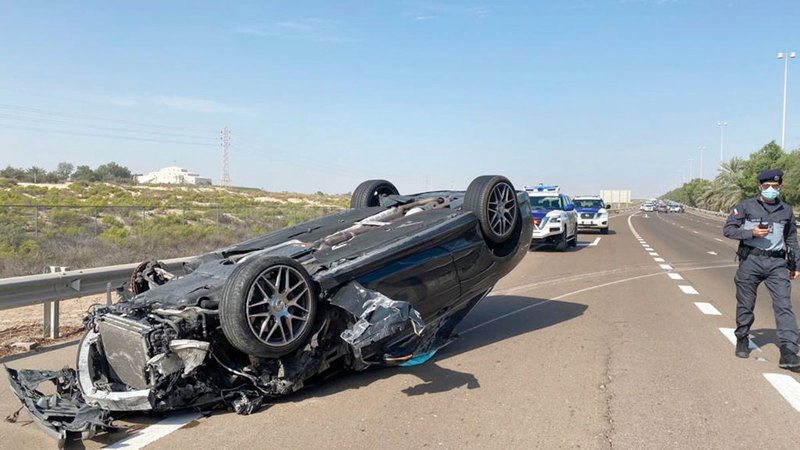 Abu Dhabi Police revealed that the first violation for not leaving a safe distance between vehicles is a warning, while it is recorded if it is repeated, noting that the automatic control of this violation targets reckless drivers who stick to front vehicles only, and endanger their lives.

In detail, the Director of the Traffic Studies and Research Branch in the Abu Dhabi Police, Captain Engineer Mohammed Al-Esai, said that the automatic tuning feature was activated in all radars on the highways in the Emirate of Abu Dhabi, early last year, to control a violation of not leaving a sufficient safety distance between vehicles, and there are many People received warning messages or violations.

He added that the aim of activating it is to control aggressive drivers only, who stick their vehicles in the front vehicles, and not every driver did not leave a safe distance, as the violation is documented and edited in the Violations Handling Section.

He pointed out that the first violation for not leaving enough space in front of it is issued in a warning manner for the purpose of awareness, as a warning message is sent to the driver on his phone not to repeat it, while the following violations are recorded against the vehicle owner.

Alesayi warned of the dangers and consequences of not leaving a sufficient safety distance behind the front vehicles, as drivers get too close to the front vehicles, pointing out that the violation is one of the main causes of rear-end collision accidents, which result in severe injuries, or sometimes deaths, due to High speeds, and these behaviors are frequently observed on offshore highways.

He revealed that the Statistics and Studies Department conducted an analysis of accident data resulting from not leaving a sufficient safety distance during the first six months after activation, as it showed a decrease in the number of serious accidents by 54%, compared to the six months preceding the activation of automatic control, while severe injuries caused by This violation is 86%, and deaths are 75%.

Alesayi called on drivers, if they are harassed by the vehicles behind, and do not leave a safety distance, to evacuate the left lane, for vehicles coming from behind, as the traffic patrols apply the violation of not giving way to them, but in the event of congestion or difficulty in moving to the right , the driver remains in his lane, until he has had an opportunity to make a safe transition to the right.

He stressed that all drivers must leave a sufficient safety distance in all cases, and drivers who have an emergency or urgent situation can alert the front vehicles, in safe ways, that they have priority to evacuate the left lane, stressing that this matter is not a justification for not leaving a distance in front of enough, endangering the lives of drivers.

In the event of a serious accident, due to not leaving a sufficient safety distance, according to the investigations, Law No. 5 of 2020, regarding the seizure of vehicles in the Emirate of Abu Dhabi, is applied, which is the financial value of the vehicle’s release of 5000 dirhams, provided that the vehicle is impounded until the financial value is paid To release the seizure, and for a maximum period of three months, and in the event of non-payment of dues, the vehicle shall be referred for sale at public auction.

Abu Dhabi Police have recently monitored violations by some reckless drivers, as they harass the vehicles in front of them, approach them to a close distance, and force them to clear the way for them, by using reflective lighting and the alarm constantly, which leads to distracting the driver of the front vehicle. And doubles the risk of dangerous traffic accidents, and violating 19,327 drivers during the first half of 2021.