The fight for the trees: they took out a centenary rubber tree and there are neighbors who complain: ‘They cut down the soul of the square’ 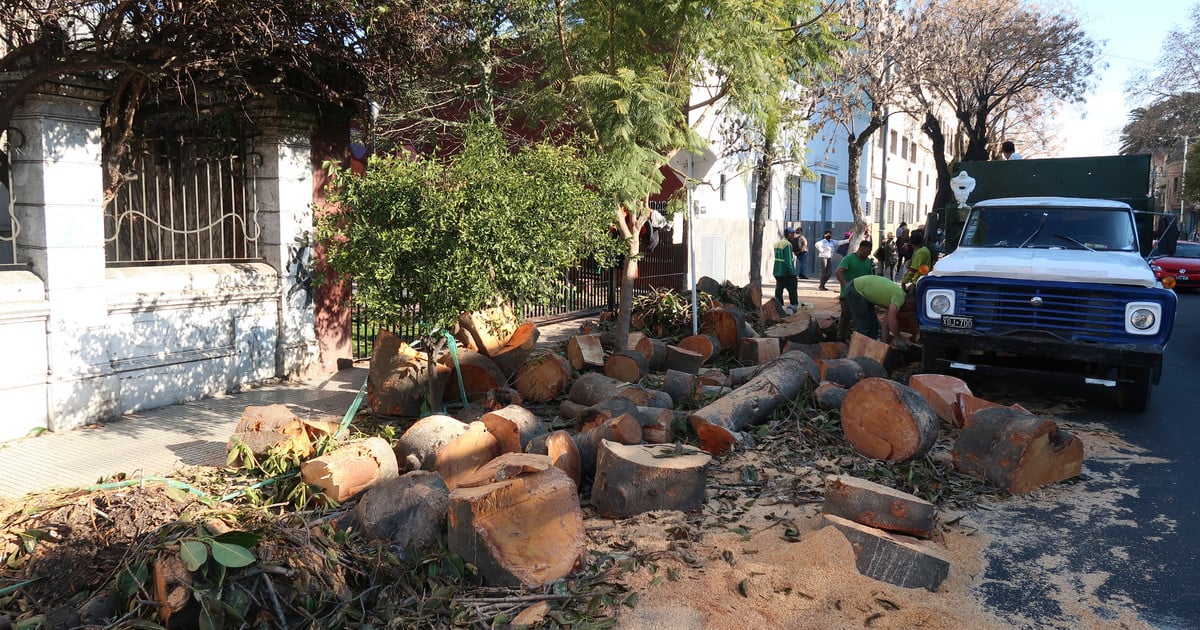 View from a drone or a building, the gomero it was a huge green patch in the middle of the block. Natural exuberance that broke with the gray, in a small square that in turn breaks with the block: a strip of public space that crosses it, with entrance through Serrano and Gurruchaga at 1000, Villa Crespo.

The square is called Patio John Malcolm, it is between Castillo and Jufré, and on Friday afternoon it was closed: from there employees of the Buenos Aires Government took out the remains of a decades-old rubber tree that, before it was cut down, gave shade and fun to the residents of the neighborhood.

The official reason: complaints from neighbors. The regulars of the place do not agree. “They cut down the soul of the plaza. It was not a simple tree: it is the one that allowed me to live many beautiful moments with my 3-year-old son Joaquín. It was the only one big enough so that we could sit there in the summer, eat, play under its shade ”, says Pamela Cortina (47), who lives a few blocks away.

Joaquín (3) playing in the rubber tree that was later cut down. Photo: Pamela Cortina

Felipe González (37), another neighbor, was also followed to the square and, above all, to the gomero. “We came with my son Vicente and my wife Laura. One of the reasons was that this tree it gave shade to the games, which greatly lowers the temperature and protects children from the sun. It is not easy to find something like this in a square ”, he explains.

The Arbolado area, dependent on Citizen Attention and Community Management of the City, has another version. Consulted by this newspaper, it sent a statement highlighting the receipt of “Several requests from neighbors indicating detachment of branches with damage to neighboring houses, clogging of pipes, cracking of floors, among other damages ”.

The text adds another story: it reads that in February 2020 the Buenos Aires government received a call from an administrator of the San José school, an establishment whose background overlooks the square. “He called for an urgent property damage inspection,” the statement said. And he adds that a month later an agronomist from the Operative Sub-management of Communal Control and Works of Commune 15 went to inspect.

Operators of the City Government remove the last remains of a centennial rubber tree that they removed in Villa Crespo. Photo: Juano Tesone

The specialist indicated in a report that the specimen raised “Current and potential risks for neighbors that frequent the square, considering its proximity to children’s play areas and neighboring properties ”. And he recommended pruning and finally replacing the rubber tree with a will go pitá, similar to those that can be seen in Lavalle and Callao or near Plaza Italia.

Finally, this week the rubber tree began to be cut down. So great was, that his removal took days. On Friday afternoon, the work continued at the site, with chainsaw operators in hand dividing the trunk and branches to put everything in a truck and take it to the City Recycling Center, in Villa Soldati.

A difficult destination to digest for those who enjoyed the tree. “I am from Formosa and I live far from my family. My son Camilo was born in a pandemic and, in times of stricter quarantine, my life became that group of moms with whom I hung out under that rubber tree that gave us shade. My son learned to walk there. Another thing that they took from us ”, laments Ángeles (45).

“They did not respect the community that loves that gomero”, highlights María Angélica Di Giacomo, founder of the organization Basta de Mutilar Nuestro Árboles. And he denounces: “They did not comply with article 15 of Law 3,263 on Urban Public Trees, which establishes that before extracting a tree you have to put up a sign ten days in advance. If they had done that, maybe people could have acted sooner. “

A centenary rubber tree was cut down in Villa Crespo and neighbors say they were not consulted. Others, on the other hand, asked for removal. Photo: Juano Tesone

What could have been done

In addition to neighborhood complaints, requests for public information were made to find out the reason for the logging, one of them presented by Di Giacomo. And the graduate in Landscape Design Fabio Márquez proposed alternative solutions from his Twitter account @paisajesante.

“Instead of cutting down the tree, they could have cut its roots and lowered the size of its crown to compensate for the imbalance,” Márquez proposes in dialogue with this newspaper. And then, before taking it out, start planting other trees that offer shade, so that when you remove the gum tree you already have other grown plants to replace it ”.

Even the choice of the tree that will supplant the rubber tree raises doubts. From Arbolado they explain that the ibirá pitá “has great ornamental value due to its outstanding flowering and fruiting, and also provides shade for most of the year due to its semi-persistent foliage ”.

For Márquez, on the other hand, “it is a delusion to plant that tree there because it is giant, it will generate conflict of roots and it has a gigantic cup”. And he proposes that “pergolas with metal structures be installed to raise native vines that provide shade while the replacement trees grow, which can take between ten and fifteen years ”.

From Arbolado they emphasize that the City began an afforestation campaign and foresees plant 14,000 specimens this year. But the daily extraction of old trees does not give an encouraging picture, in a city with just 6.09 square meters of green per inhabitant. The 10 minimums recommended by the World Health Organization seem to be getting further and further away.