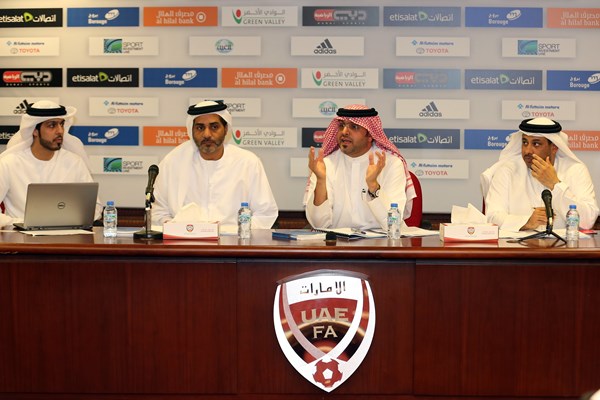 Mutasim Abdullah (Dubai)
The Emirates Center for Sports Arbitration at the Football Association put the last line on a pioneering experience, as the experience of the judiciary and arbitration body of the Football Association is a unique example at the Arab and continental levels, in terms of its work on resolving disputes that may arise between members and clubs Referees, officials and players in the Federation.
The address of the Emirates Center for Arbitration came in implementation of Article 17 of Federal Law No. 16 of 2016 regarding the establishment of the Emirates Center for Sports Arbitration, which states that “The sport arbitration bodies existing at the time this law comes into force must adjust their positions in accordance with its provisions, within one year from the date of work. with it”.
The experience of the Arbitration Board of the Football Association continued for about 8 years, since February 2013, when the Federation’s Board of Directors headed by Youssef Al Serkal at the time decided to form the “Arbitration Board” in the Federation, to be a positive turning point in the work as it completed the formation of the arbitration pyramid of the Federation.
The committees of the Judicial Committee of the Football Association at that time included the Disciplinary Committee, the Honor Charter Committee, the Appeals Committee, while the arbitration committee included the Status and Transfer Committee of Players (a permanent committee), the Dispute Resolution Chamber, and the Arbitration Board.
The regulations of the “Arbitration Board” of the federation stipulated in Article 7 related to the authority of the Authority in paragraph 4, that “the authority shall have the authority to adjudicate on appeals, in discrimination of decisions issued by the appeals committees in the federation until the Emirates Center for Sports Arbitration begins its duties and terms of reference.”
The Football Association created, at the General Assembly meeting in November 2015, a committee for discrimination, to serve as the nucleus of the Court of Arbitration for Sport, and is a supreme body that reconsiders appeals decisions and appeals against decisions of the arbitration board.
With the entry of the Emirates Center for Arbitration into actual work, the degree of discrimination will be abolished at the federation level, provided that the center shall have jurisdiction in adjudicating appeals in order to discriminate against the decisions issued by the appeals committees.
The difference between the judicial and arbitration bodies lies in the fact that the first comes within the binding and authoritative sports general system, which is usually limited to the discipline and appeal committees that consider matters related to the game of football between two teams, and the errors that may result in fees, penalties and fines needed. To a judicial body that issues a binding decision in its regard, in addition to a higher judicial body to be challenged, which is the Appeals Committee of a purely judicial nature.
As for arbitration, it differs from the judiciary, as it is in principle of a voluntary nature, that is, that the parties agree to choose a person to settle the dispute between them, and his decision is binding on the parties and it has no authority on all, and the philosophy of judicial bodies is based on the authority of the judiciary to impose respect for the law to solve A dispute, in addition to being punitive at times, while the philosophy of arbitration is based on conciliation between the disputing parties.