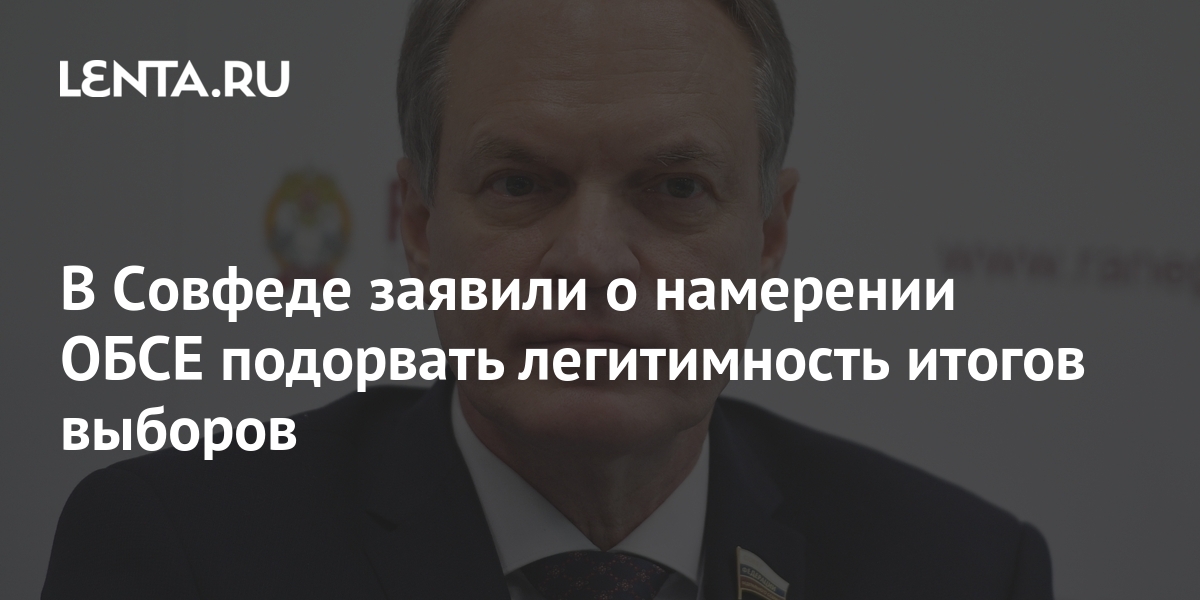 Alexander Bashkin, member of the Federation Council Commission for the Protection of State Sovereignty, Telegram-Channel Commission announced the intention of the OSCE to undermine the legitimacy of the election results.

According to the senator, the reaction of Western countries to the decision of the Bureau for Democratic Institutions and Human Rights not to send observers to Russia confirms that the organization’s actions were planned in advance.

We believe that the refusal of the ODIHR and the OSCE PA to send observers to the elections to the State Duma confirms the intentions to use the observation mission for the subsequent justification of non-recognition of the voting results.

Photo: Press Service of the Federation Council of the Russian Federation / RIA Novosti

Bashkin also drew attention to the fact that the representative of the European Union’s foreign policy service Nabila Massrali reproached Russia for the lack of independent observation of the elections. According to the senator, the reaction of the Swedish Foreign Minister, OSCE Chairman-in-Office Ann Linde is also indicative.

We regret the unlawful restrictions and interference of Russia in the activities of the OSCE / ODIHR on
election observation. The integrity of the ODIHR mandate for independent, impartial and professional election observation must be ensured, which is vital to democracy

State Department spokesman Ned Price said the US expressed regret that coronavirus restrictions would prevent the OSCE from observing the Duma elections. According to him, which leads TASSWashington respects the ODIHR’s decision that the pandemic made “credible and independent observation” impossible.

Although OSCE observers will not be able to attend, the international community will observe the Duma election process, both before and on election day, to determine if conditions are conducive to free and fair elections. Russia will not escape international attention

On August 3, the OSCE announced its refusal to send its delegation due to Russia’s demand to limit its membership due to the epidemiological situation in the country. The corresponding statement was published on website organizations.

ODIHR head Matteo Mecacci stressed that it is important for the organization to independently determine the number of observers, while Russia, due to the sanitary and epidemiological situation, allowed 50 people to be invited. According to Mecacci, the decision is not related to the pandemic.

10 people from the OSCE Parliamentary Assembly will be able to attend the elections to the State Duma. ODIHR, in turn, believes that a mission with 80 long-term and 420 short-term observers is needed in the Russian Federation.

Alexander Bikantov, Deputy Director of the Information and Press Department of the Russian Foreign Ministry, stressed that the OSCE’s refusal to attend the elections is a disregard for Russia’s efforts to counter the spread of coronavirus, and added that the Kremlin’s decision did not discriminate against the ODIHR, since the delegates were allocated the largest quota.

Deputy Foreign Minister of Russia Alexander Grushko is sure that exaggerated demands have been made to Russia in the spirit of “all or nothing.” According to him, Moscow fully fulfilled its obligations to the international organization and sent an invitation to the elections in accordance with the regulations.