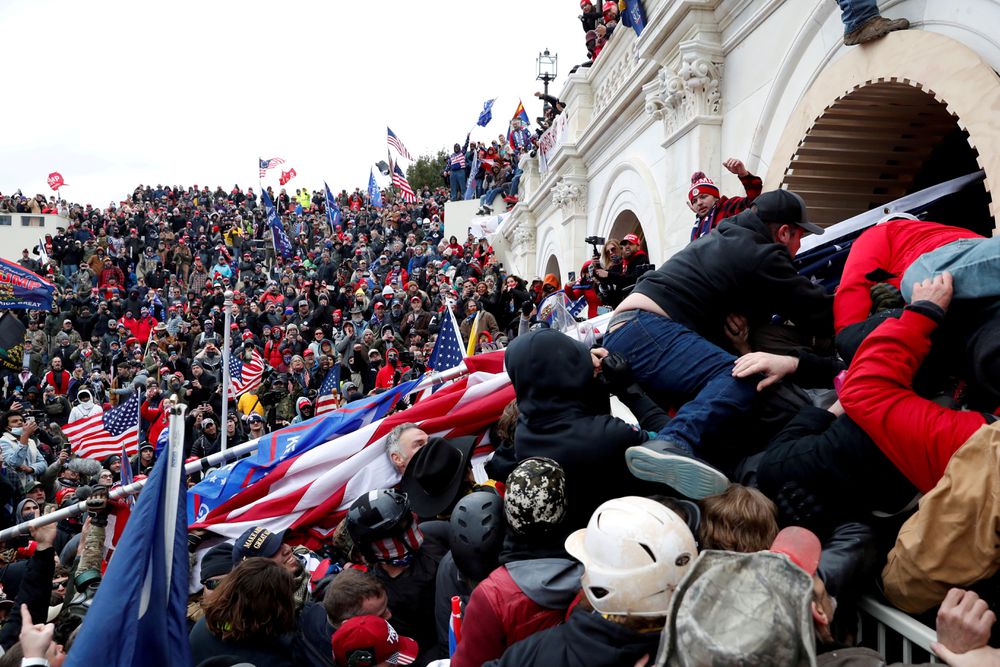 As the United States tries to digest the January 6 uprising, evidence of how the assault on the Capitol was openly planned on social media is multiplying. Parallel to the amazement over the failure to prevent prevention, there is growing concern about a second attack whose signs are just as clear. The far-right forums plan new actions that culminate in the so-called “Million Militia March” on January 20, the day of Joe Biden’s inauguration. The FBI, Pentagon and Twitter warn that more riots are planned, and Washington authorities are calling for more security.

“Fight like hell,” President Trump encouraged. “Let’s have a trial by combat,” their attorney Rudy Giuliani told them. “Time to write down names and kick ass,” proclaimed Congressman Mo Brooks. And Senator Josh Hawley greeted the masses with a raised fist as they marched toward the Capitol. But the spirits of the protesters were heated from home. And numerous pieces of evidence found on Capitol Hill and on social media indicate that at least part of the raiding mob followed a relatively well-defined plan.

In far-right digital forums there were explicit conversations about how to break into the Capitol, for example, and tie up congressmen with cable ties to prevent the certification of Joe Biden’s electoral victory. Spaces were offered in the cars to march towards Washington, and it was debated whether there was room in the station wagons to transport the weapons they wanted to carry. The same movements have been detected to plan mobilizations in the coming days, culminating in a large march in Washington on January 20, the date of the inauguration of President-elect Joe Biden and Vice-President-elect Kamala Harris.

The FBI, according to an internal report accessed by the chain ABC, “Has received information from an identified armed group that intends to travel to Washington on January 16.” “They have warned,” adds the bureau report, “that if Congress tries to remove the president through Amendment 25 there will be a huge revolt.” “Armed protests are being planned in all 50 state capitols from January 16-20, and in the Washington Capitol from January 17-20,” the bulletin concludes.

The Pentagon also “is aware of more possible threats from potential terrorists” in the coming days, including January 20. This was expressed by the Secretary of the Army, Ryan McCarthy, to Congressman Jason Crow in a telephone conversation whose transcript has been made public by the Democratic legislator, a member of the Armed Services Committee of the House of Representatives.

Security forces, McCarthy told the congressman, seized firearms, Molotov cocktails, explosive devices and cable ties in the vicinity of the Capitol, “indicating that a major disaster was narrowly avoided.” The congressman expressed to McCarthy his “deep concern” over the reports that affirm that “members of the Army in active duty and in the reserve were involved in the insurrection.”

The possibility of a second attack was also mentioned on Friday by Twitter, in the statement announcing the suspension of President Trump’s account. “Plans for future armed protests have already begun to proliferate on and off Twitter, including the proposal for a second attack on the US Capitol and State Capitol buildings on January 17,” the statement said. The company believes that the president’s two tweets on Friday that led to the “permanent suspension” of his account, although the wording was not explicit in its incitement to violence, “may inspire others to replicate the violent acts that took place on January 6th”.

In the same forums where the assault was planned, there has also been talk for weeks of organizing massive protests that culminate in what has been dubbed the “March of the Million Militias”, on January 20, on the Capitol esplanade where it will take place. the investiture ceremony. In conversations on Parler, a social network with little moderation and popular among the extreme right, already censored by various servers, there is open debate about the appropriate weapons to take to the march, from baseball bats to assault rifles.

The mayor of Washington, the Democrat Muriel Bowser, sent a letter on Saturday to the Department of Homeland Security, calling for the reinforcement of security in the capital to be put in place in the face of Biden’s inauguration, which It was initially planned to start on January 19, just one day before the ceremony. Republican Senator Roy Blunt, charged with overseeing the planning of the Biden and Harris swearing-in, joined Bowser’s demand.

Nine days after the solemn and usually massive ceremony in front of the Capitol, the complex woke up this Monday isolated from the outside, cordoned off by an imposing fence over two meters high and a deployment of security forces. Legislators, still in a state of shock, accelerated preparations for the impeachment of a president more silent than ever, who has remained on the sidelines of the conversation about the threat to national security, stripped of his usual means of communication by the closure of his profiles on social networks.

Tucumán: what are the three requirements to enter the province

Weather On Wednesday morning, a snowstorm and traffic chaos are expected to continue