“The fascists get us to finally lose against Portugal” 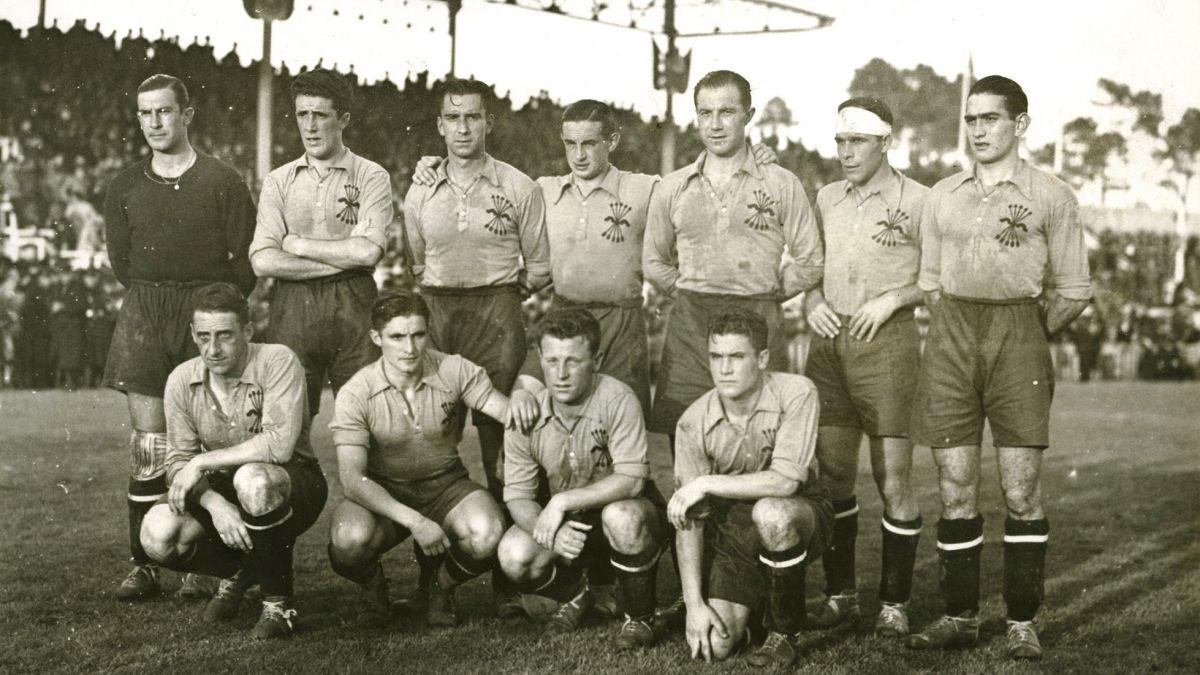 On May 9, 1937, the weekly Domingo, from San Sebastián, announces that “by mandate of the Caudillo” a committee is working to create the National Football Federation. It is made up of Luciano Urquijo, president of Atlético de Madrid, Genaro de la Riva, leader of Espanyol, and Juan López García, president of the Andalusian Federation and journalist (signed as Juanito Balompédico). The Francoists had already taken the Basque Country and were advancing through Cantabria towards Asturias.

Franco’s idea was to revive football as soon as possible to give a feeling of normality. FIFA maintained its recognition of the Federation of Republican Spain, but it was almost inactive. Seized by the Popular Front, only its secretary, Ricardo Cabot, gave signs of activity from Barcelona, ​​supervising the activity of the clubs in the Mediterranean area and maintaining correspondence with FIFA.

The new Federation was born on June 12 and its first purpose was to organize selection matches against Portugal, Germany and Italy. President was Commander Julián Troncoso, a bizarre Africanist military man and former director of Zaragoza. The republican press cited him as “the organizer of Franco’s espionage in France”, which is certain, since he was Head of the Border Information Service. A strategic position, given that, with Madrid under siege, the embassies had moved to Hendaye, Biarritz or San Juan de Luz.

Troncoso combined both activities, until an incident that I will narrate later. Coach was Amadeo García Salazar, Alavés medical captain and alma mater. He was recruiting players, many of them taken out of combat, such as the Sevillian goalkeeper Guillermo Eizaguirre, Lieutenant of the XII Flag of the Legion, or Jacinto Quincoces, an ambulance driver for the Red Cross at the front. Several probable versus possible matches were played, the first of which was the reopening of San Mamés and was refereed by Eduardo Iturralde, grandfather of the current commentator.

The trials are not encouraging. The best are on tour with the Basque Country, from which only Roberto Echevarría and the colossal Gorostiza have repatriated. He suffered a long flu and could not count. The Francoist press fantasizes about other returns (Blasco, Cilaurren, Regueiro, Lángara, Irarragorri…), but they did not occur. Nor were there any players from the Mediterranean, Asturias or Madrid.

The new Federation requested to be recognized by FIFA, arguing that it controlled most of the territorial federations: Aragonese, Balearic, Cantabrian, Galician, Hispano-Moroccan, Las Palmas, Navarra, Oeste, Sur, Tinerfeña and Vizcaína. The republican controlled the Catalan, the Valencian and the Murcian. Castellana and Asturiana were divided and inactive by the war.

On November 7, the Solomonic response arrives: it recognizes each Federation hierarchy over the territory under its command and allows them to make international matches, but stating that they will lack official status. The news is greeted with excitement in the Francoist zone. The Republican feels betrayed.

The premiere is against Portugal in Vigo on November 28 with an Italian referee, 30,000 spectators among whom there is no room for a pin and enthusiastic prolegomena: parades, Iberian brotherhood speeches, votes for the soon end of the war and delirium when the public address announces that four players have suffered injuries to the front. The team wears light blue, with the yoke and dates as a shield. They play: Guillermo Eizaguirre, Ciriaco, Quincoces; Aranaz, Vega, Ipiña; Epi, Gallart, Vergara, Chacho and Vázquez. Only the first three would have been headlines in a selection of the best of the moment. Epi was a teenager who would become a star.

Portugal had never beaten Spain in 12 previous games. ‘Or jogo that we never win’, they said. But this time they won 1-2. An explosion on the other side of the border (“A mais grande vitoria despois de Aljubatrota”, headlined a newspaper) and howls in the republican zone, synthesized in this other: “The fascists finally managed to lose Spain to Portugal.”

And they would repeat it on January 30, 38, return visit to Lisbon (1-0), again with an Italian referee. Juanito Balompédico became president due to the absence of Troncoso, who disappeared due to a bizarre affair that was later reported. He had gone by boat to Brest at the head of a commando to appropriate a Republican C-2 submarine that had taken refuge there after the fall of Gijón. The operation failed and he ended up imprisoned in France, from where they could get him out after four months. Amadeo Salazar was also absent, due to a traffic accident, and was replaced by Ramón Encinas. This time Spain dressed in white, again with the yoke and arrows. Guillermo Eizaguirre, Ciriaco, Quincoces; Peral, Soladrero, Germán; Epi, Vergara, Campanal, Herrerita and Vázquez. Change the full stocking and there are two novelties up front. In Portugal, three players avoid the Roman salute. The new defeat drove away the idea of ​​playing against Italy and Germany. There was no more selection until after the war.

These two games do not count in the list of countries, nor do FIFA register them.